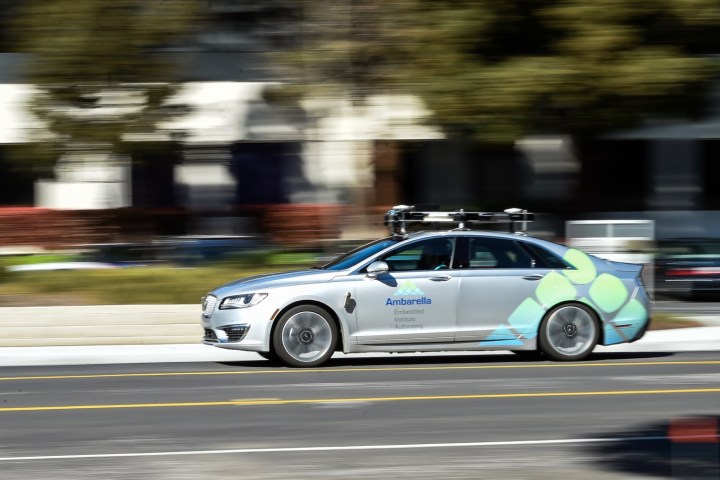 Semiconductor company Ambarella is getting serious about self-driving cars. Not long after unveiling its CV1 autonomous-car chip at CES 2018, Ambarella is preparing to launch a second-generation chip, called CV2. It’s also demonstrating a self-driving car with a prototype sensor suite on the roads of Silicon Valley.

Ambarella’s prototype self-driving car is a modified Lincoln MKZ named EVA (for Embedded Vehicle Autonomy). EVA is unusual in that it doesn’t use lidar, instead relying just on radar and an array of cameras to orient itself. Six long-range cameras are mounted around the roof, and four short-range cameras are mounted on the front and rear bumper on each side of the car. Ambarella’s main business is cameras, so the company wanted to show off what they could do in autonomous cars.

Most companies believe lidar is essential for self-driving cars — especially new advanced solid-state lidar — but Ambarella believes cameras can do more of the heavy lifting. Its sensor suite uses stereo cameras, which let computers identify three-dimensional objects more easily. This allows the system to quickly identify the shape of an object and make decisions, Ambarella claims. Cameras can also recognize “visual landmarks” and compare them to digital maps, allowing cars to navigate even when a GPS signal is interrupted, Ambarella notes.

Seeing a connection between its existing business and the need for self-driving car sensors, Ambarella got into the autonomous-driving game in 2015 by acquiring VisLab. A spinoff of the University of Parma, VisLab began demonstrating autonomous cars in 1998. It participated in the various Defense Advanced Research Projects Agency (DARPA) autonomous-car challenges, and has conducted extensive testing in its home country of Italy. It is not alone.

Over the past few months, Ambarella has moved more aggressively to commercialize VisLab’s hard-won knowledge. At CES 2018 it launched an image-processing chip aimed at self-driving cars called CV1, which is used in the EVA prototype. But Ambarella is already rolling out a second-generation chip, the CV2. The new chip can process at a rate of 4K at 30 frames per second, and has 20 times the computing power of the previous CV1 chip, the company said.

Ambarella doesn’t want to become a tier-one supplier, selling complete autonomous-driving systems, marketing and business development VP Chris Day told Digital Trends. Instead, Ambarella plans to sell its chips and software to automakers, suppliers, and software developers to use in their own systems.

While a fatal crash involving an Uber autonomous car has caused some companies to reassess their plans, Ambarella is pushing ahead with its Silicon Valley self-driving car demonstration. It doesn’t expect to have trouble finding customers when production of the CV2 chip begins later this year.