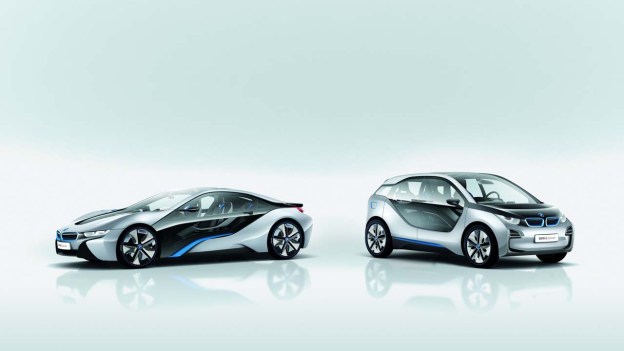 BMW is adding more fours to its lineup, and we’re not talking about the fuel-efficient four-cylinder engines that are finding their way into cars like the 528i. No, we mean cars with the number four in their name: there’s the X4 crossover, the 4 Series coupe that will replace the current two-door 3 Series, and now a third four. BMW will reportedly unveil the i4, another model in its “i” line of eco-friendly cars, at the Los Angeles Auto Show.

The i4 will join the i3 city car and i8 supercar in BMW’s new line of fuel-efficient vehicles under the “i” sub brand. That means it will have an electric or plug-in hybrid powertrain and will take advantage of new developments in lightweight materials first seen on the other i-cars.

Obviously, BMW is keeping the details a secret until the i4’s LA debut, so it’s difficult to say exactly what form the car will take. With the i3 and i8 at opposite ends of the automotive spectrum, BMW has left a big gap for the i4 (and potential future i models) to fill.

The i3 is rear-wheel drive, and is powered by an electric motor with 170 horsepower and 184 pound-feet of torque. The i8 uses the same motor to power its front wheels, but also has a 1.5-liter, turbocharged three-cylinder gasoline engine (223 hp, 295 lb-ft) to power its rear wheels and generate electricity.

The i4 will probably be closer to the i3 than the i8. The latter is supposed to be BMW’s technological flagship, and there can only be one admiral in a fleet. If BMW sticks to its current system of numbers with the i-cars, it would also point toward an “i3-plus” model.

In BMW-speak, even numbers denote coupes, odd numbers are sedans. The 4 Series will be a coupe (and convertible) version of the 3 Series, just as the 6 Series is a two-door 5 Series. That means the i4 could end up being an i3 with a more rakish, less practical body.

Whatever it looks like, the i4 will most likely share BMW’s “Life Module” chassis, a carbon fiber-reinforced plastic skeleton that is designed to act as a safety cell for passengers, with the i3 and i8. Think of it as a more posh version of Smart’s Tridion safety cell. Aluminum subframes for the motor and suspension will probably make up the rest of the car.

Full details and photos of the i4 will surface when the car makes its LA debut on November 28.

4th of July Mattress Sales: Get a Casper for $195 and more