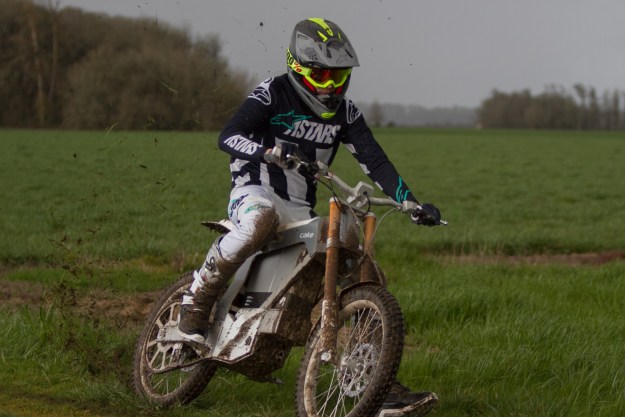 If Ikea and Tesla had a baby, it would be the Cake Kalk OR. Simple, yet dripping with the latest technology, and flush with design elements.

Analogies aside, I had the opportunity to rip the Cake Kalk OR through a wet Oregon countryside for an afternoon, and found this little electric dirt bike has a personality all it’s own.

Cake may not be a name you’ve heard of. Hailing from Sweden, Cake burst onto the motorcycle scene with a very different ethos. It wants to speed up the journey to a zero emission society with excitement and responsibility.

Excitement is a must for anything motorsports-related, but responsibility? In addition to Cake’s four bike lineup with the Kalk OR, Kalk&, and upcoming Osa+ and Osa lite, Cake offers solar panels through a collaboration with SunPower. Offering solar panels is certainly responsible, but more notably, it’s different. Building out a new category of super light electric motorcycles is one thing, but the logistics of offering a fuel source is a whole other can worms, and reminiscent of another all-electric brand, Tesla.

The off-road only bike that launched Cake, the Kalk OR, is a cross between a downhill mountain bike and a motocross dirt bike. It defines a new motorcycle segment that Cake calls Light Electric Offroad, or L.E.O.s.

It attracts plenty of attention. Within minutes of sitting my butt on the bike, passerby stopped to chat about specs and get a closer look at a bike that’s so obviously different.

Cake has put thought into every element on the Calk OR. It would’ve been easier to source a tire already in production, but Cake wanted the only part of this bike that touches the earth to be one of it’s most thoughtful. Cake designed the Trail Saver tires to offer grip in the dirt while keeping the trail intact.

My initial impression was that these eco-tires weren’t going to cut it in the muddy Oregon winter I was about to subject them to. However, after some slight massaging of air pressure and getting used to the massive amounts of torque, I found the tires to be capable in very slippery conditions.

The tires are helped by the Kalk OR’s minimal weight. With aluminum wheels, swingarm, and frame, plus carbon fiber body panels, the Kalk OR comes in at a hair over 152 pounds. To put that in context, a 250cc dirt bike usually comes in between 240-270 pounds, while most downhill mountain bicycles are 30-40 pounds.

The Kalk OR feels like a dirt bike that’s meant to be tossed around like a rag doll. Even as I thrashed this Swedish fish through mud, the stakes never felt too high. Even if you’re swinging the back end around, trying to pull off your longest drift to date, the bike’s light weight and lack of momentum lets you muscle through what’s typically a high-side inducing misstep.

That said, finding trouble, and the fun that comes with it, is still easy when you have this much power. The Kalk OR packs an 11kW electric motor. That translates to about 14 horsepower, which is not a lot compared to 250cc motocross machines, which have around 45 to 50 horsepower.

But electric motors aren’t about horsepower. They’re about torque. The Kalk OR’s motor puts out a mind-bending 280 Nm of torque, which translates to 206 lb-ft. A typical 250cc bike offers 30-35 lb-ft. The Kalk OR makes the most of its 14hp, using torque to rocket you to its top speed of 50 miles per hour.

With all of the mud and sliding on my ride, I would’ve been overwhelmed if it weren’t for the Kalk OR’s multiple power and braking modes. Easily accessible, and even more easily understood, is the control pad that sits in front of the rider.

The Kalk OR has three power modes:

These modes give you very different experiences, almost as if you’re getting three bikes in one. But as you up the power, your battery range will inevitably drop from 3-4+ hours in Explore to 1 hour in Excel.

Thankfully, these numbers seem to be conservative estimates. I saw over 3 hours while bouncing between Excite and Excel mode. Still, remember that range will vary due to rider weight, riding style, and terrain.

The bike’s three braking modes might not be as intuitive to an uninitiated rider. That’s because they don’t have anything to do with the physical brakes, which work great and deserve an honorable mention, but rather how much the motor helps slow you down when you let off the throttle.

Level three offers the highest level of motor-assisted breaking, while level one eliminates it altogether, making the Kalk OR feel more like a mountain bike. Engine braking modes 2 and 3 also help regenerate some battery life, which is like a two-for-one deal on helpful engine management.

When you do stop to charge the Kalk OR, charging from a standard wall outlet is surprisingly quick, with 0-80% taking 1.5 hours and 0-100% clocking in at 2.5 hours. That means a good trail run in the morning, a relaxed lunch, and another 4-6 hours of riding in a day, which should be enough to wear even the heartiest enthusiasts thin.

When I saw that the Kalk OR only comes with a full Öhlins set up, my jaw dropped. Öhlins, known for its top-tier components, is usually reserved for the most premium trims of the most premium bikes.

As expected, the suspension is smooth and fully adjustable, letting you dial in whatever riding you plan to throw at it. This is an aspect of the Kalk OR I’m wholly confident that, unless you’re a professional rider, you’ll never find it lacking.

The Kalk OR represents a move in a very friendly direction for the two-wheeled world. The ability to dial the power down makes the Kalk OR viable for riders of varying abilities, and while the lack of weight makes it easy for experienced riders to throw around, it also makes it far less intimidating for newbies.

So, is the Kalk OR dirt bike perfection? Not quite, though my issues are minor.

Cake built a 24” wheel for the Calk OR, which is an uncommon size in the motorcycling world. That means you’re stuck with Cake’s proprietary Trail Saver tire, whether you like it or not. At $90 a piece, they aren’t the cheapest options, and they’re only available from the manufacturer.

The custom components don’t come cheap, either. At $13,000, the sweet Swedish engineering and premium parts make the cost to ride quite high. On the other hand, you can think of the Kalk OR as three bikes in one—and maybe that’s enough to make the difference for you.

My last issue is the lack of an app. I want telemetry and stats, and I want it now. I’ve been assured by the folks at Cake that this is planned, but for now, your battery life is relegated to four little LED indicators, and firmware upgrades need to be handled through a wired connection.

The Cake Kalk OR is covered by two year parts and labor, excluding normal wear and tear.

The Kalk OR is a super light bike with face-melting amounts of all-electric torque and the most premium parts. All this from a company who actually backs up their claims to be environmentally conscious with actionable steps you can take to make a difference. Is this the most guilt-free off-road fun you can have? Quite possibly.

The first alternative is the Kalk &. The & is the OR’s road-going sibling, which has a slightly smaller rear sprocket, a more standard 19” wheel, lights, and a dash.

Another option is the newly announced Ubco FRX1, which will be available later this year. The FRX1 is $3,000 less than the OR, and could be as quick, but doesn’t have the Cake Kalk OR’s incredible suspension. I’ll know more about the FRX1 when I get a chance to ride one later this year.

Because I know someone will be angry if I don’t mention Zero Motorcycles, none of Zero’s lineup applies to this category of super light electric trail bikes. Cake’s lineup compared to Zero’s is apples to oranges. End of story.

The quality of this bike is top notch. Even the ridiculously white seat came clean with minimal effort after flogging it with mud all day. With such a well-thought-out and simple machine, my best guess is that you’ll be problem-free for years to come. The solid build is then backed up with the Kalk OR’s ability to upgrade firmware and swap out batteries.

Yes. Though, for my money, I would spend the extra $1,000 and upgrade to the street legal Kalk&. The Cake Kalk OR is a fun bike both on and off the trail.