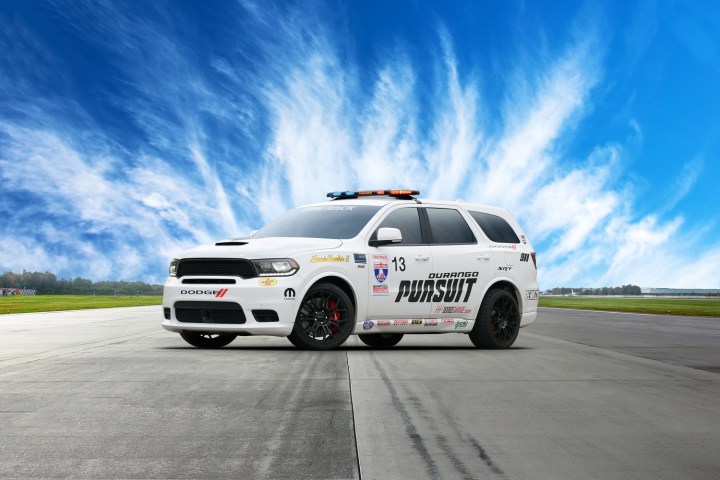 Dodge just found a fun new use for its 6.2-liter supercharged Hellcat Hemi V8. The automaker stuffed one of these engines into a Durango Pursuit, the police version of its Durango SUV. Built for the One Lap of America, a tour of various racetracks that runs May 4-11, Dodge calls the hellacious police cruiser a “concept.” Speeders had better hope it doesn’t go into production.

Officially titled Dodge Durango SRT Pursuit concept, and nicknamed “Speed Trap,” the SUV has the engine from a Dodge Challenger SRT Hellcat Redeye, meaning it produces 797 horsepower. The Durango was also treated to a cat-back exhaust system, 0.6-inch lower ride height, 20-inch wheels wrapped in Pirelli P-Zero tires (from a Challenger SRT Hellcat Widebody), and upgraded brakes from Brembo. The third-row seats were removed to save weight, and a roll bar and driver safety harness were added. Dodge left the eight-speed automatic transmission and all-wheel drive system stock, even though they are normally teamed with a much less powerful engine.

Dodge is looking to defend its Truck/SUV class win from the 2018 One Lap of America. Instead of a one-off concept vehicle, Dodge used a standard Durango SRT to win that title. Powered by a naturally aspirated 6.4-liter Hemi V8 making 475 hp, the SRT is the sportiest version of the Durango you can buy. Dodge parent Fiat Chrysler Automobiles (FCA) hasn’t seen fit to put a Hellcat engine in a production Durango; the Jeep Grand Cherokee Trackhawk is the only SUV that currently has it. But even the Trackhawk doesn’t have the 797-hp version used in Speed Trap.

One Lap of America is considered the successor to the Cannonball Run, a coast-to-coast race on public roads organized by automotive journalist Brock Yates in the 1970s. Launched in 1984, One Lap of America aims to keep the racing safer (and legal) by sticking to tracks. Competitors drive to a series of tracks over the course of a week for different events. The 2019 event will visit eight tracks, with close to 4,000 miles of driving on public roads to get to them. Dodge noted that one advantage of an SUV is that it has plenty of room for gear, and for off-duty team members to take a nap.