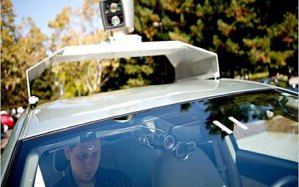 Google is lobbying lawmakers in Nevada to pass legislation that would make the state the first in the nation to allow self-driving cars to operate on public roads, reports The New York Times. The two Google-backed bills come less than a year after Google revealed that it was developing cars that could be driven without human control.

The first bill would allow for the the licensing and driving of autonomous cars on public roadways. The second bill, would deal with Nevada’s pesky law that bans distracting activities, like text messaging, while behind the wheel.

To help push the legislation through the state congress, Google hired Las Vegas-based lobbyist David Goldwater, who argued before the State Assembly in April that self-driving cars are safer than vehicles manned by humans, and said the technology would help in the development of more fuel-efficient cars and promote business development in the state.

Currently, Google’s fleet of self-driving cars would be illegal to operate without a human driver present. Google was able to legally test the cars on about 140,000 miles of roads around California, including the famous Highway 1, but only with a human behind the wheel to take over in case things went awry.

At the head of Google’s driverless car project is artificial-intelligence researcher and former Standford professor Sebastian Thrun, who in 2005 led a team of students to win first place in a contest to build an autonomous vehicle that was organized by the Defense Advanced Research Projects Agency at the Pentagon.

Google’s driverless fleet of vehicles is made up of six Toyota Priuses and one Audi TT, each of which are outfitted with a large roof-mounted laser range finder, an assemblage of sensors and a trunk-ful of computer equipment.

Because Google tests each car with one person in the driver’s seat and another in the passenger seat, the company has so far been able to avoid receiving traffic violations for its technically illegal testing. If passed, the Nevada bills would allow the company to conduct their testing within the confines of the law.