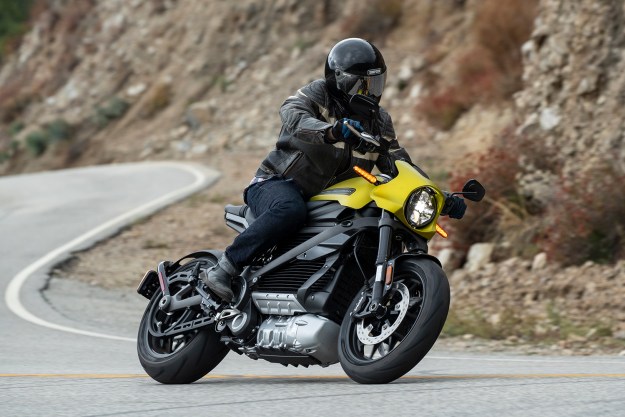 First Drive: I was wrong about the Harley-Davidson Livewire
MSRP $29,799.00
DT Tech For Change Product

“Riding the Livewire is unlike anything I’ve experienced on two wheels.”

There’s a row of lime green and burnt orange Harley-Davidson Livewires attractively parked on a busy one-way street. They’re looking photo-shoot ready, and they’re here for me to play with.

A lone late model sport bike, overweight rider clad in a high-vis jacket, appears down the street street and slowly cruises up to the Harleys at neighborhood speeds. Once our portly friend is about 10 feet away, he aggressively revs his throttle four or five times as he slides by our lineup of electric bikes.

I’ll never know if he meant to signal his approval of the electric Harleys, or he was showing off his loud combustion engine to call the electric motorcycles out. Whatever his intent, he looked like a relic. Next to these battery-powered bikes, his was a dinosaur giving its last roar before extinction.

The Livewire aims to also prevent an extinction, as well. That of Harley-Davidson itself. U.S. motorcycle sales have declined for years, and Harley’s expensive bikes are among the decline’s victims. With the announcement of the Livewire, and the subsequent drip of specs and details, I thought this electric bike was Harley’s sole hope for resurrection. I was wrong about that. I was wrong about a lot with the Livewire.

Throwing my leg over the low saddle of this new kind of Harley-Davidson, I was surprised how lightweight the bike felt as I rocked it back and forth beneath me. Most Harleys have a healthy and purposeful heft. While the Livewire factually lives up to that reputation at 549lbs, the weight is hung so low in the chassis that it happily tricks you into thinking it’s a much lighter bike.

The Livewire has no problem motivating itself from a dead stop.

The vast majority of the bike’s weight is concentrated in the 15.5kWh battery and the unique “Revelation” electric motor, which is mounted just 5.1 inches off the tarmac. That custom Harley heart is good for 105hp and 86ft-lbs of torque, plenty for a bike of any kind. The Livewire has no problem motivating itself from a dead stop.

Motivating me at the moment is the desire to finally test out the Livewire, so I hit the two-button sequence that brings this high-tech Harley to life. The engineers use two notifications to let owners and riders know when the bike is functional and when the throttle is “hot.” One of these is logical and welcome. The other, not so much.

The dash screen lights up with a green border, green of course meaning go. The second, more unusual notification arrives from a pulse that vibrates through the bike itself. The engineers achieved this by having the electric motor rock and back and forth ever so slightly. The Harley team compared this to the machine’s heartbeat.

Finally, it was time to hit the streets. Rolling on the throttle gives a quarter inch of no response, then instant and silent propulsion out into the waiting street.

The bike is not silent. No electric bike, car, plane, train, or motorized luggage is actually silent. You always hear the rising thrum of the electric motor spinning as you increase revolutions per minute. The sound from the Livewire’s motor and driveshaft has tuned through engineering and materials choices to be as pleasing as possible.

Harley-Davidson drops LiveWire electric motorcycle’s range, speed, charging time
Harley-Davidson traveled to the Geneva International Motor Show to release additional specifications about the LiveWire, its first electric model. The LiveWire has an urban range of up to 140 miles and takes 3.0 seconds from zero to 60 mph.
By Bruce Brown

It worked, too. The sound is a welcome accompaniment to the increased forward momentum I am piling on as I familiarize myself with the Livewire’s feel and response.

As I (literally) zip through traffic, it’s worth debunking a popular complaint about electric motorcycles. The motto that “loud pipes save lives” is antithetical to EV motos, and a constant pushback from traditional bike owners.

Here’s the problem with that theory. The vast majority of motorcycle accidents involve a vehicle turning left in front of an oncoming rider. The other major cause is motorcyclists driving under the influence of alcohol. Neither of these situations would be fixed by having loud tailpipes.

Other situations where a loud bike is helpful – like lane splitting in California, where I live – can be solved by tapping your bike’s horn to alert cars to your presence. Do as the South Asians do on their scooters, and make that horn your co-pilot.

Honking never becomes necessary while I’m on the Livewire, as every other road user seems transfixed with the bike and my silent rolling progress. And that progress is spirited indeed.

The Livewire seems to have an infinite sweet spot of acceleration. At any speed, you can quickly gain 10 more miles per hour with the slightest twist of your wrist. When you’ve overdone it, the brakes – traditional steel discs that have a progressive and predictable bite – bring you to a swift and confident stop.

The feel of riding the Livewire is unlike anything I’ve experienced on two wheels.

The Livewire’s switches and mirrors are instantly recognizable from the Harley parts catalogue. That means replacements or upgrades should be as simple an affair as on other bikes. The seating position is comfortable, and the saddle provided plenty of shock and bump absorption. With no transmission, I felt no jerkiness or hangups. All controls fall easily to hand and are intuitive after just a few minutes on the bike.

The feel of riding the Livewire is unlike anything I’ve experienced on two wheels. Actually, that’s not strictly true. When you are on a traditional bike, stringing corners together perfectly, your bike can melt away and seem to disappear beneath you. In those fleeting moments, in that split second, it can feel like you are weightless and flying a few feet off the ground. There is no bike, just you.

That is what the Livewire feels like. All the time.

With no engine vibration and with no exhaust noise, you are left with scant few reminders that you are on a bike at all. Above 50mph, the electric hum of the motor disappears behind the wind noise against your helmet, and you are left with nothing but you and the canyon unwinding in front of you, hitting turns back and forth in as rapid a succession as you’re able. It is an eerie feeling, and one that I would pay a handsome price to recapture on a daily basis. I’ve never been a canyon-carver motorcyclist, but I would happily change that with a Livewire in my stable.

I have to say, I was wrong about this bike. I thought it was going to be too heavy, since it’s a Harley. I was unimpressed with the 146 miles of max range. I thought they missed the mark, showed up to market a day late and a dollar short. I was wrong about all of that. The Livewire is an excellent bike and a great effort from the Harley team.

It’s not heavy in practice since the dense components are so low in the chassis. The range isn’t spectacular when compared to a Zero SR/F, but is more than enough to live with on a daily basis. The engineers have also ensured that you can gain 13 miles of range by charging for an hour at a lowly household 120v, and up to 116 miles in just 40 minutes using a DC Fast Charge at an Electrify America (or other network) station.

The price is quite dear at $29,799, but the surprise for me was that Harley-Davidson knows this, and isn’t bothered in the slightest. You see, the Livewire is their showcase. It is their halo model, to show what they are capable of building and get youngsters like myself interested in their electric portfolio.

The Harley team was eager to point out that the Livewire is going to spawn a whole lineup of electric bikes that will cover a broad range of prices.

My time with the lime green Livewire was confined to a handful of hours in the California mountains and adjoining towns. Without living with the bike for days at a time, I cannot say whether my conversion would last. But right here, right now, on the bike, I see no reason why it wouldn’t.