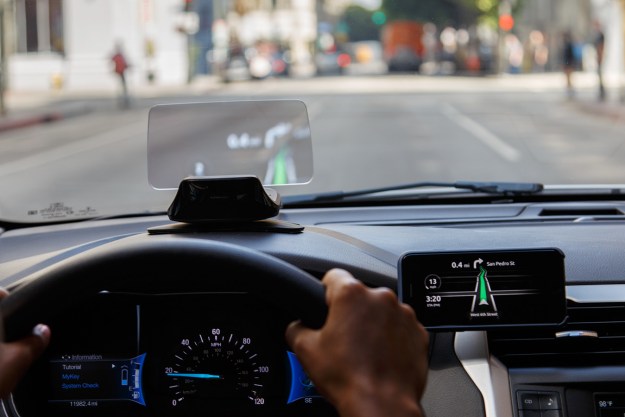 “The Hudway Cast adds a HUD to your car with surprising ease, and its applications seem endless.”

You may think an easy-to-reach phone mount keeps you safe from distraction while driving, but taking your eyes off the road for even two seconds can make you 24 times more likely to be involved in an accident. Simply glancing down to see the next turn on your navigation app could create a problem.

Hudway wants improve your focus by casting your phone display directly ahead of you on their head-up display. We spent some time with the company’s latest product, called the Hudway Cast, to see if it’s worth keeping an eye out for — literally and metaphorically.

If this Hudway Cast head-up display unit looks familiar, it is because the display unit is similar to the Hudway Drive product that we tested in 2017. The team at Hudway has developed the Cast to offer an affordable alternative to the tech-packed Drive device that should be released in the coming year. Similar in concept, the Hudway Cast utilizes a head-up display system to provide information right in the driver’s regular field of vision.

Unlike the Hudway Drive, the source for all of the display information is packed within your smartphone. The Hudway Cast uses the Apple AirPlay and Google Cast features to literally “cast” your phone screen to the head-up display. This concept opens the Hudway Cast up to seemingly limitless possibilities as any application can be projected in front of the driver. There is also a Hudway Cast mobile application for iOS and Android that is specifically designed for the experience and gives easy access to things like navigation, music, and phone calls.

Included with the Hudway Cast is the main head-up Cast unit, a cloth lens cover, a rubber mounting pad with adhesive backing, and a 12-volt lighter cable to power the Cast. Production units will also ship with a magnetic phone mount to keep your smartphone within reach. Our kit also included an OBD-II cable that will be an optional accessory and allows the Hudway Cast to display vehicle information such as RPMs and MPG on the screen.

The Cast unit connects in seconds to the included dash mount and holds tight to your dashboard with the adhesive backing. Removal of the unit is just as easy, with the Cast simply twisting off the mounting pad. This is a must-have feature to avoid leaving the entire device visible on the dash when you leave your car. Any worry of issues with the mount from early experiences with the Hudway Glass are completely gone. Each component from Hudway feels quality and well designed. The only people who may face issues with mounting the unit are those without much room between the dash and the windshield. To make sure before buying, you can use this template provided for the Hudway Drive as the size is identical.

Viewing the road ahead

Once mounted, it only took a few moments to move the Cast screen around to get the visibility correct for our preferred driving position. Once plugged into either the OBD-II or the 12-volt cord, the unit will power on and display “Hudway Cast” on the screen. Then, depending on the current iOS setting, the display will show the name and password for the Cast’s internal Wi-Fi and either an Apple or Android logo. Switching between iOS preferences is done with one of the only three buttons on the top of the Cast. The other two buttons adjust volume up or down for the Cast’s built-in speaker. When using the OBD-II cable, the main screen will display two gauges to show speed and RPM without even having any phone casting.

We were only able to test the iOS application for this early hands on as the Android functionality was still in development. Once connected to the Cast Wi-Fi, you simply swipe up and look for the Hudway Cast on your Screen Mirroring or Apple TV list. We were then able to see our iPhone screen projected on the Cast display screen From there you can simply turn your phone to landscape mode and open any app on your phone or utilize the Hudway Cast application. In testing, the Hudway Cast app gives simply makes controlling things like your media and navigation easier at a glance. You can choose preferred apps for both music and navigation and let the Cast application handle opening and controlling those functions.

The general concept works well and the Hudway Cast displayed information from the phone just fine. Is it the best practice to mirror everything from your phone? Probably not, but at least it’s in your eye line. Further development with the Hudway Cast mobile application is needed, as this is an early look, but general use with even Waze or Google Maps was great. On the road, the brightness and visibility are excellent and truly look like a built-in display from a major automotive manufacturer in day or night.