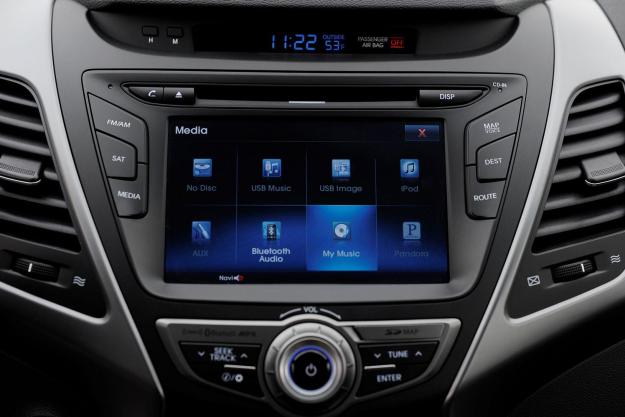 “With its updated Blue Link infotainment system, Hyundai is showing that it can compete with the big boys when it comes to in-car technology.”

Technology has been a key part of Hyundai’s effort to shoulder its way into the company of up-market automakers.

It is no surprise, then, that the company’s Blue Link infotainment system is among the most advanced in the business. After this year’s update, it boasts a truly dazzling number of features – enough to make it competitive with just about any system on the market.

Unfortunately, Blue Link can’t fully live up to its promise. Critically, Blue Link lacks a truly intuitive user interface, which makes it difficult to actually access many of the system’s features. As a result, Blue Link is an above average system that can’t quite break into the top tier.

Hyundai says it designed Blue Link to work like a smartphone and in some respects it is easy to see that. The system is built around a series of menus with app buttons familiar to anyone who has used to a tablet or smartphone, which is to say: everyone. As a result, it is fairly easy to navigate from place to place.

Once the user has navigated the system to the desired location, things fall apart a bit. The features themselves are not always logically organized. Take for example the process of streaming music from a phone. Unless a phone is already paired, the music button is blacked out. Instead, the user must pair the device through the phone menu. Not a big problem in and of itself … but there is more.

Blue Link is an above average system that can’t quite break into the top tier.

When I plugged in my phone to charge via the USB, I was unable to use any of its audio apps. If I tried to play an audio book via Audible, whatever I had just been listening to via my iTunes library would immediately cut back in. I found this frustrating, but assumed I could switch the system to Bluetooth streaming where the app had worked just fine. Silly me! Despite spending a great deal of time and effort, when my phone was directly plugged into the USB port, I was unable to find any way to switch Blue Link from the USB connection back to Bluetooth.

This isn’t to say that this task is impossible. There might be a way that I was unable to discover, but it is indicative of how settings and features are hidden in this system. I frequently found that basic things were easy to accomplish, but that anything even slightly complicated was nightmarish.

People who use this system everyday will no doubt figure out all of its nooks and crannies, making this less relevant in the long run. But getting to that point is going to be frustrating, and it may prevent less tech-savvy users from accessing a lot of what Blue Link has to offer.

User alienation would be a shame. As I said in the introduction, Blue Link is loaded with features. The obvious stuff like navigation, Bluetooth streaming, satellite radio, and voice recognition are all there. For the user who is willing to dig deeper, however, there is much more.

In the category of less entertaining and more useful, Blue Link also features SiriusXM’s Travel Link. Travel Link can show stock prices, movie times, real-time traffic, and weather updates. But most importantly it does this through the satellite antenna rather than the users data plan. That may mean that users have to pay for satellite radio, but at least that is a flat fee.

Topping all of this off are the integrations with both Google and Apple. Blue Link’s navigation system is tied in with Google’s destination search, meaning that drivers can use the car’s voice recognition system to simply ask the car to find a destination. For drivers who prefer to have their lives dominated by Apple, Hyundai is just as happy to offer Siri “eyes free” integration.

When it comes to hardware, Blue Link offers something of a mixed bag. Blessedly, Hyundai has picked a system and stuck with it; Blue Link is a purely touchscreen-based system. This means that there is no screwing around with multiple interfaces. Unfortunately, Hyundai didn’t get it quite right.

Blue Link also has the chameleon-like ability to live up to whatever interior it is placed in.

The touchscreens used by Hyundai are by no means terrible. In fact, they are large and offer excellent resolution. However, they lack sensitivity particularly when it comes to swiping and scrolling. During my use, the system repeatedly thought that I was trying to click on an icon when I was in fact trying to scroll down a menu. These screens are still far from the worst that I have used, but they are still frustrating.

On the plus side, what is going on behind the scenes is all good. In my experience, Blue Link is remarkably stable and fast. Once the buttons work, transitions from menu to menu happen smoothly. What is more, in all my time with Blue Link, I have never experienced a freeze or a crash, which is something Ford’s SYNC can’t claim.

Graphics are a consistent problem for most mass-market systems. Even if the Blue Link touchscreen may not work as smoothly as an Apple product, the designers clearly decided to emulate the looks.

From the apps buttons to the menus, Blue Link bears a striking resemblance to both iOS and Android displays. Ripoff or no, but the result is nice to look at. In fact, compared to the slightly cartoonish graphics used by systems like Toyota’s Entune, Blue Link comes across as grownup and refined. This helps add class to entry-level products like the Elantra, and doesn’t let the side down on Hyundai’s high-end products like the Genesis.

Blue Link isn’t perfect. And after my frustrating battle with Audible audio streaming, I am probably not the system’s biggest defender. Yet Hyundai’s effort is still above average for mass-market infotainment systems. It doesn’t want for features, and, unlike a great many systems, once the user has figured it out, it will actually work.

Perhaps most impressively, Blue Link also has the chameleon-like ability to live up to whatever interior it is placed in. This is an attribute that even the best mass-market systems, like Uconnect, struggle to do. This makes Blue Link a solid offering, and there is the hope that Hyundai can simplify its user interface over its life span.

Until then, at least it is nice to look at.