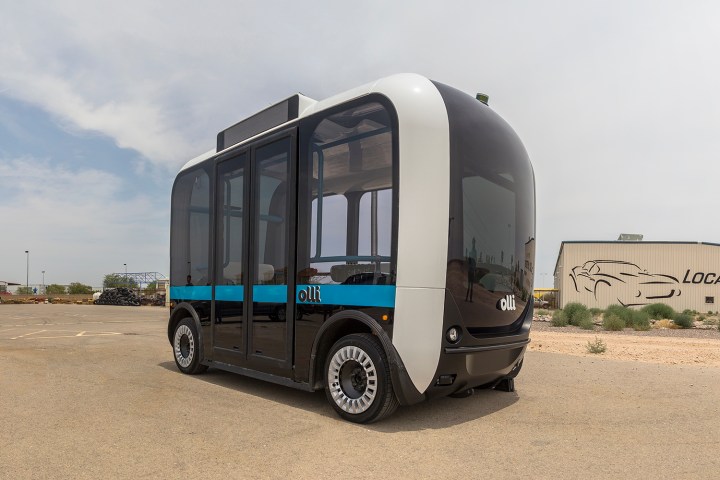 LM Industries asked municipalities to propose uses for its Olli low-speed autonomous shuttles in what the company calls a “fleet challenge.” The first pair of winners — one each in the greater Sacramento, California, and Phoenix metropolitan areas — have been selected and will get their vehicles in 2019. At the same time, LM Industries is kicking off a second round of the challenge, this time for the Washington, D.C. area.

The first two winners are both school campuses: Sacramento State University, and East Valley Institute of Technology (EVIT), a joint technical education campus that offers classes for Phoenix-area high school students. Each location gets two Olli vehicles for three months. Local Motors, the division of LM Industries that builds the vehicles, will begin mapping both locations “within weeks,” and hopes to deploy vehicles for public use by the end of January, according to a press release.

“It’s exciting to know that with each new challenge a new audience will be exposed to self-driving technology,” LM Industries CEO Jay Rogers said in a statement. “And, we look forward to the insights that will come from each deployment as the ever-changing industry of autonomous vehicles continues to evolve.”

A second challenge for the Washington, D.C., area is now underway and runs through February 6. As with the previous challenge, groups are invited to submit three-month use programs for Olli vehicles. Those proposals will be evaluated by a panel of judges, who will pick a single winner. LM Industries plans to run additional challenges in other municipalities in the future, including some outside the United States.

The box-shaped Olli vehicles can seat up to eight passengers and are fully electric. They have a maximum range of 40 miles, or 25 miles with a full load of passengers and the air conditioning blasting, according to Local Motors. Local Motors claims to have given more than 2,000 demonstration rides in various cities already. Olli shuttles are fully autonomous, according to Local Motors, but they operate with a human “steward” onboard for safety reasons. The vehicles are also limited to 25 mph.

Low-speed shuttles puttering around a college campus may not seem like as big a leap as, say, Waymo’s autonomous ridesharing service, but there are some advantages to LM Industries’ slower pace. Asking groups to propose uses for autonomous vehicles ensures that the vehicles are deployed in a way that makes sense for each location. It also increases transparency for local officials, who don’t always know what they’re getting into when they sign up to host self-driving cars.