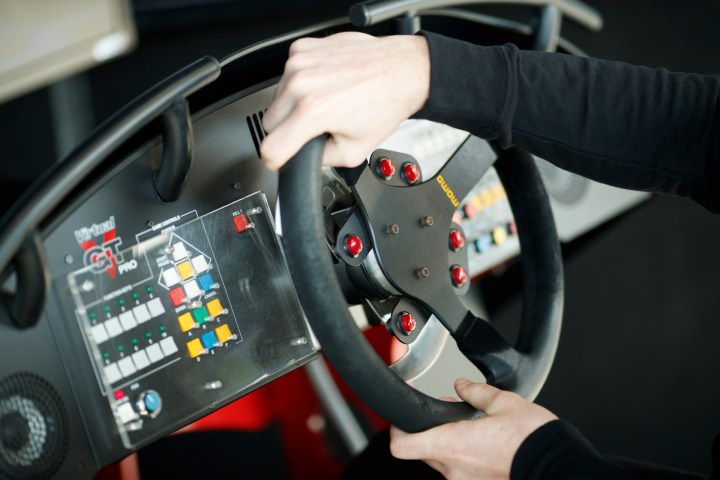 Simulated racing is by far the fastest-growing segment of the motorsports world. For less than the price of a single test day at a racetrack, anyone can purchase a complete setup for their home and start practicing. Through service companies like iRacing, drivers can enter multi-player races and compete against others, win money, and gain fame in the sim racing world. Companies like iRacing and others are making their simulations as realistic as possible by micro-scanning the racetracks, and by perfecting the physics and performance of every car in the game’s garage.

“What’s interesting about iRacing, and sim racing in general, is that it’s the only e-sport that actually has skills that transfer to the real world,” says Kevin Bobbit, director of marketing at iRacing. “If you play FIFA, the soccer game, there’s nothing in there that has anything to do with actually playing soccer. You could play Call of Duty, but that doesn’t teach you to be a soldier. You can be very good at the game but there’s nothing that’s transferable. But with iRacing all the skills transfer over. The way you drive, the way you look at a track, whatever. Everything is transferable.”

To find the best simulated racing drivers in the country, the Mazda Hot Lap Challenge tests a driver’s ability to set the best lap time around the same road courses used by IMSA racers. Anyone with iRacing on their home gaming system can participate in any of seven scheduled Time Attack competitions set on seven different tracks, or you can lay down your best lap on a full-scale simulator Mazda brings to the same seven tracks at IMSA events throughout the year. For 2018, the qualifying tracks were Daytona, Lime Rock, Watkins Glen, Road America, Gateway, Laguna Seca, and Road Atlanta.

Two winners are selected from the qualifying events; the best of those playing at home and the best among the at-track competitors. Both finalists receive a trip to the Rolex 24 Hours of Daytona for the final shootout. Side by side, the two drivers compete on identical simulators driving identical simulated Mazda Miatas to see who can turn the fastest lap of Daytona’s challenging road course.

The first of the 2018 finalists was Charles Mayer from Granby, Connecticut. Mayer put down a fast lap on Mazda’s simulator at his home track, Lime Rock Park. “I drive in track days in my Porsche 944, and the braking distance, the pressure, everything is very different in the simulator,” Mayer told Digital Trends.

The second finalist was Logan Clampitt of Orange County, California. Clampitt qualified from his home system, where he is a leading iRacing competitor.

“Logan is one of our top drivers,” Bobbitt declared. “He’s pretty well known in our world. He races in our highest level NASCAR series, which has a $100,000 prize pool at the end of the year.”

Clampitt looked at the Hot Lap Challenge and decided to make this competition part of his program.

“Racing has been an aspiration of mine since I was just a little kid.”

“I practiced quite a bit for the online race,” Clampitt said. “I got the pole in that, which was awesome and it helped me a lot. After I won, I turned a few laps [of Daytona] once or twice a week just to get a feel for it. I think that really helped.”

If you’ve already guessed that Clampitt won the shootout, you’re right. Each driver was given 15 minutes on each of the two simulators to lay down their best lap. At the end of the half-hour shootout, Clampitt’s best time of 2:14.827 was about five seconds faster than Mayer’s best time. The victory earns Clampitt a test day at Virginia International Raceway in a fully-equipped Global MX-5 Cup car.

“I’m a little nervous,” Clampitt said. “When I get there, I’ll be more nervous than I am right now, that’s for sure. Racing has been an aspiration of mine since I was just a little kid. I got onto iRacing and I’ve been on there for six years, and that’s been the goal the whole entire time.”

Mayer took his second-place finish philosophically. “It was an awesome experience,” he declared. “I’m glad I had the opportunity to come out here and do this, and I want to thank Mazda for getting me down here,” he said.

The Mazda Hot Lap Challenge will be on again for 2019, and drivers can sign up at iRacing.com.

More than just a game

It’s exciting to see enthusiasts learning to race on a gaming system and potentially making the jump to an actual race car, but established professional race drivers also rely on simulators to make sure that they’re ready to race when they arrive at a track.

“I have an iRacing rig at home,” Mazda Team Joest driver Tristan Nunez said. “I’m not as talented as some of the sim racers are. It’s crazy how fast those guys are. I use it for extra seat time before a race, like just before coming to Daytona. It’s a pretty basic track, but it’s still the more seat time you get, the more comfortable you get experimenting with different lines.”

For Mazda Team Joest, bringing a Daytona Prototype car to the track for a test day involves a large team of engineers, drivers, and support staff. Costs can easily run into hundreds of thousands of dollars. So they send a smaller team of drivers and engineers to a professional simulator at Multimatic Motorsports in Toronto, Canada.

“It’s more cost effective to send drivers there to test instead of flying 80 people here, buying tires and fuel, and all that,” said John Doonan, director of motorsports for Mazda North American Operations. “The other thing for us is that I can send three or four young drivers up there and not put a million-dollar race car at risk. I send them up there and we can gauge their talent instantly.”

Advanced motorsports simulators allow teams to test different setups and changes to the car at a fraction of the price of an actual test day.

“Essentially, we have as close to reality as possible, in a simulator version of the car,” declared Mazda Team Joest driver Harry Tincknell. “We’ll go there before each race and basically treat a simulator as if it’s a proper test day. I’ll have my performance engineer there, and my data engineer. Probably have someone from the simulator team as well. So it could be up to five or six people engineering the simulator with me actually in the car.”

Does all that simulator work pay off on race day? Numbers don’t lie, and in qualifying for this year’s Rolex event, Mazda Team Joest’s Olly Jarvis drove the No. 77 Mazda RT24-P Daytona Prototype around the Daytona road course faster than any other car in history. Jarvis not only captured the overall pole position, he broke the all-time course record set 26 years ago.

“This is the result of all the hard work that’s gone in back at the workshop,” Jarvis said.

The takeaway from this is that if you want to make a career out of racing, that steering wheel on your coffee table could well be your best path to success.