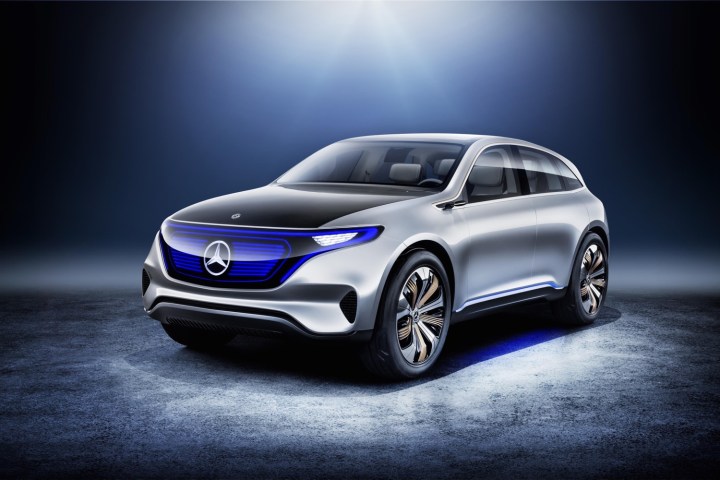 Buried in the press releases for the seemingly endless array of models Mercedes-Benz and its various sub-brands plan to unveil at the 2018 Geneva Motor Show was a brief, but important, announcement. Mercedes will unveil the first production electric car from its new EQ sub-brand in Geneva, the first of what will be many new electric cars from the German automaker.

Mercedes did not disclose the identity of the new model, but it’s possible that it will be an SUV based on the Generation EQ concept (pictured above), which first appeared in 2016. With a claimed 310-mile range, the Generation EQ would give Mercedes a rival to the Tesla Model X in addition to the crop of electric SUVs being raised by the German automaker’s traditional rivals.

The Jaguar I-Pace will appear in production-ready form at the Geneva show, and Audi’s e-tron may show up as well. The Jag and Audi will go on sale later this year, but Mercedes may not get its new electric model into showrooms until next year.

After a false start, Mercedes is getting serious about electric cars. It plans to launch at least 10 all-electric models over the next few years under the EQ sub-brand, which will be analogous to rival BMW’s “i” division. Alongside the SUV, Mercedes will likely launch a production version of the smaller EQA concept that first appeared last year. Every Mercedes will have a hybrid or all-electric powertrain option by 2022.

Other luxury automakers, including Volvo, Jaguar Land Rover, Infiniti, and BMW, are also undertaking ambitious electrification plans. But talking about filling their lineups with hybrids and electric cars is one thing, while actually doing it is another. It is a good thing that we are getting some actual production models in the form of the new Mercedes, the Jaguar I-Pace, and the Audi e-tron. The floodgates may be opening.

Geneva 2018 will be a busy show for Mercedes. Besides the new electric car, Mercedes will unveil the new AMG G63 performance SUV, some new features for the Maybach S-Class luxury sedan, an updated version of the C-Class sedan, and the new AMG GT Coupe.