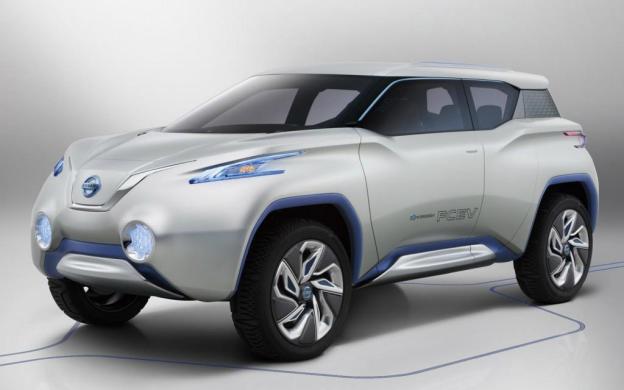 Remember hydrogen fuel cells? Back in the heady days of the GM Hy-Wire and Honda FCX, the propulsion system that emits nothing but water was seen as the wave of the future. Then people realized how expensive fuel cells are to produce, and cheap lithium ion batteries became the new way forward. Now, Nissan is giving hydrogen another chance with the Terra concept, which will debut at the Paris Motor Show later this month.

Nissan, maker of the Leaf EV, has been a champion of battery-powered electric cars, but now the company is (no pun intended) branching out. The Terra is about the size of a Nissan Juke, and uses the Leaf’s electric motor. But instead of a battery pack, this concept SUV has a hydrogen fuel cell stack.

Once hydrogen is pumped in, the fuel cell separates a hydrogen atom’s protons (which travel through a membrane) from its electrons, which travel around a circuit inside the cell, releasing electrical energy.

The Terra is not the first car with fuel cells, but Nissan hopes to show how the technology can be applied to an SUV. Unlike the Leaf, the Terra is four-wheel drive. A pair of motors, one in each rear wheel, work with the Leaf’s front transaxle to provide traction. Each motor can also provide extra power to one wheel, helping to steer the Terra around corners.

Since the Terra doesn’t have a rear axle or transmission tunnel like conventional SUVs, it also has a completely flat floor. That should make this a very utilitarian vehicle. Front seat passengers will have plenty of legroom; the only thing under the dashboard is the pedal box.

The Terra’s interior is definitely not utilitarian. The dashboard has a flowing, sculptural look and while the seats look cool, they probably don’t have enough support for long trips. Nissan also replaced the gauges with a screen, giving the Terra a real glass cockpit.

Like the Juke and most other small crossovers, Nissan envisions the Terra as a suburban runabout, a vehicle with the all-wheel traction and tall driving position of a truck, but that is designed to be driven on roads exclusively.

It’s worth picking a market segment for the Terra because, crazy styling and interior aside, Nissan is thinking about putting a fuel cell vehicle into production. The company says the Terra’s cells cost 83 percent less than normal, since they have fewer precious metals.

Cost, along with the unavailability of large quantities of hydrogen, is one of the reasons why fuel cells are viewed as impractical. It’s also why Honda’s FCX Clarity cost $600 per month to lease. A Fisker Karma or Tesla Model S looks like a bargain by comparison.

As long as battery-electric vehicles suffer from relatively short ranges and long charging times, developing hydrogen as an alternative seems like a good Plan B. The technology to make hydrogen practical may not exist today (although Nissan’s cost-saving fuel cell is a big improvement), but the technology to make an all-electric sport sedan like the Model S didn’t exist ten years ago. Who knows what the future will bring.

Topics
5 stunning electric SUVs that prove you don’t need to spend $100K for luxury
No mere EV, the sensor-stuffed EX90 is Volvo’s towering tech flagship
Business upfront, 31-inch TV in the back. BMW’s electric i7 is a screening room on wheels
GMC poured all of its truck-making expertise into the Sierra EV pickup
Uber says it’s investigating ‘cybersecurity incident’
Nvidia’s Drive Concierge will fill your car with screens
The Uber hack is an outrageous tale of a teen hacking for fun
Tesla to fix window software on 1M of its U.S. cars
Lux and refreshingly livable, Mercedes’ EQE moves EVs mainstream
How to watch Tesla’s AI Day tonight and what to expect
2023 Audi Q4 E-Tron first drive: the predictable and traditional EV SUV we need
We need more 7-passenger EVs, but the 2023 Mercedes EQS SUV has room to improve
Tesla AI Day 2022: Optimus, self driving cars, and everything else announced