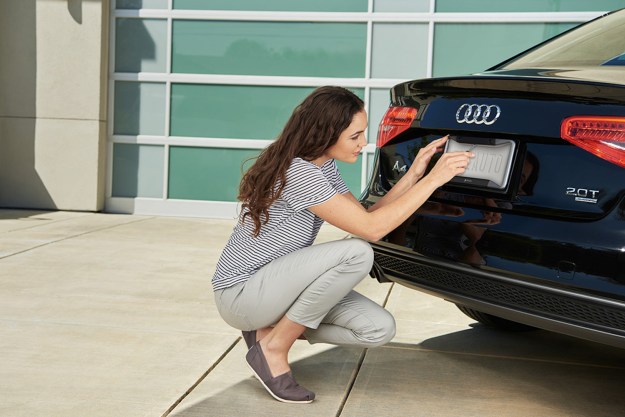 “If want a backup camera that sets up in minutes and works as intended, the RearVision is a wonderful buy.”

In April 2014, the federal government’s National Highway Traffic Safety Administration (NHTSA) put into effect a new regulation that requires all automobile manufacturers to add backup cameras to vehicles by May 2018. But until the mandated deadline, backup cameras are still offered as an option or exclusive feature, with some manufacturers charging upward of a thousand dollars to add the functionality as part of a more luxury trim package.

There are plenty of third-party backup cameras on the market that are more affordable, but a vast majority of cameras use wires for power and connectivity; wires that often require the need to drill through various parts of your vehicle. And the few wireless cameras that are on the market tend to be subpar in image quality and resolution.

To provide a best-in-class after-market solution, Pearl developed a completely wireless backup camera called RearVision. Pearl’s approach hits on all of the weak points of current backup cameras: RearVision is entirely wireless, dead simple to install, uses your smartphone as a high-resolution display, offers collision alerts, and relies on both Bluetooth and Wi-Fi connectivity to transfer live images on the fly.

Note: The RearVision will only work in 1996-model-year cars or newer that have a 12V OBD-II port. You should check your vehicle before purchasing.

Despite our love for DIY projects and tinkering, the idea of drilling holes through a vehicle is far from appealing. So, RearVision’s no-drill setup is enticing.

Pearl says the RearVision takes ten minutes to set up. We managed to do so in about five – two of which was spent finding a screwdriver to remove the license plate – so installation took no effort, even for novices. The camera is out-of-the-box ready, with helpful illustrated instructions.

Once you’ve removed the license plate (and any cover it might have had), the process is as simple as attaching a metal frame around the license plate and securing it back in place. The main RearVision unit, which contains two cameras (one for day, and another to help it see at night; more on this later) is then attached to the frame with a single security torx screw. That’s it. Unfortunately, you will have to say good-bye to the old cover that proudly proclaims your alma mater, or that your other car is a Porsche.

The next step is to pair the RearVision to your smartphone, which requires downloading Pearl’s RearVision app (Android and iOS) and plugging in the RearVision adapter into your vehicle’s OBD II port, which is usually located below the steering column. All of the video processing and transmission of data is done by the OBD II port. Inside the small device is an eight-core processor and wireless connectivity to act as a middleman for video transmission, when you shift your car into reverse.

The kit also includes a phone mount that attaches to your car’s dash or vent, and your phone via a magnet.

After a brief onboarding process within the app, the RearVision backup camera is good to go.

Our expectations for the RearVision were incredibly high. After all, you’re paying $500 for a device that you’ll use every time you put your vehicle into reverse. Even though the RearVision is more affordable and less invasive than other after-market options, it’s far from cheap.

But even with the bar set high, RearVision managed to reach it. With its 175-degree field of view and onscreen lines for guiding, backing out a 2012 Buick Verano went from being a former pain-in-the-neck to not only convenient, but enjoyable. The wide field of view made it easy to see anything and everything behind the vehicle.

With its 175-degree field of view, backing out went from painful to convenient and enjoyable.

If an object or person gets too close for comfort, the RearVision will beep through its OBD II adapter and display a little water drop effect over the video – on top of where the obstacle is located. The sound is loud enough to get your attention – even with the radio on – and the ripple effect is a subtle visual cue that helps distinguish the obstacle from surrounding areas.

When your phone is positioned horizontally, the RearVision app shows you the full, wide-angle feed across the entire screen. When positioned vertically, the app shows two images: the entire 175-degree overview of what RearVision sees, and another above it that lets you choose from three separate locations of said video feed to zoom into for a closer look.

For us, the standout feature is the RearVision’s video quality. During daylight, the video is absolutely astounding, especially when paired with a larger phone, such as an iPhone 7 Plus or Google Pixel XL. There is obvious distortion around the edges of the video, but that’s to be expected with such a wide-angle lens in front of its small 1/3-inch CMOS sensor. Besides that, the picture is clear as can be and capable of picking up even the smallest obstacles – like your kitten that somehow snuck outside.

The camera also performs well at night. One of the two cameras housed inside the framing has an infrared sensor. When using RearVision at night, the system automatically switches to this camera and uses the rear-facing lights of your vehicle to illuminate the path behind it.

The image quality for both day and night is impeccable, as long as the connection is strong. It’s important to note how the RearVision operates in terms of transmitting the live video footage. The default method of video transmission is Wi-Fi. When Wi-Fi isn’t working for some reason or another, the system reverts to Bluetooth.

In the two months we’ve been using the device, we can only recall three times when it switched to Bluetooth (a notification pops up letting you know it’s using Bluetooth over Wi-Fi). And during these moments, we did notice a substantial decrease in video quality, but it was still good enough to see what was behind the vehicle.

If you’re wondering how the cameras are powered without wiring, it’s possible thanks to an internal battery that’s continually charged, via integrated solar panels beneath the frame. Even on the cloudy days, the RearVision worked without problem and never showed any signs of a low battery.

The only issue we encountered with the RearVision was visibility in less than ideal situations. For example, when it was raining, the light used to illuminate the vehicle’s license plate caused the beads of water on the lenses to light up extremely bright, making the video feed all but unusable. It’s worth noting though that this wasn’t so much RearVision’s fault, as it was more the shape of the Verano’s rear end. For some reason, the rear bumper is angled in such a way that the lenses on the RearVision unit were more exposed, both to rain and the license plate light. On most other vehicles the unit wouldn’t be nearly as exposed, which should prevent this from happening.

Pearl says the RearVision takes ten minutes to set up. We managed to do so in about five.

To promote safe driving, and to adhere to specific laws, Pearl limits RearVision to operating only when you’re driving 10 miles per hour or less. When you aren’t backing up, the RearVision app switches to its dashboard interface, which offers customizable shortcuts to your most-used apps on your phone. Our setup, for example, includes Apple Music, Apple Maps, and Waze. It’s a clever app design that simplifies the process when you plan on using other apps for your drive.

On Android, you can set up RearVision to automatically open when you get in the car. On iOS you’re limited to a push notification when you get in your vehicle, but a simple swipe takes you directly into the app.

If you’re new to backup cameras in general, there will be a bit of a learning curve. Trusting the camera over your mirrors takes a little getting used to, but once you get the hang of it, it becomes second nature.

Pearl offers a three-year warranty, as well as a 30-day money-back guarantee. If your RearVision becomes defective during regular use, Pearl will either repair or replace the unit. This warranty is transferrable in the event a RearVision unit is sold as part of a used car, but the warranty date is still based on the original purchase date.

The RearVision, price wise, sits somewhere in the middle: It isn’t the most affordable backup camera out there, but it’s also not out of reach. It’s without a doubt the least invasive and most impressive option across the board.

Compared to what we’ve seen in the market – in both specs and usability – there’s nothing like it. If cost is the biggest factor in your purchase, you’ll be able to find a more affordable option, but you’ll be sacrificing the simplicity of setup and the quality of video, which we think justify the cost.

Theoretically, a RearVision unit will last as long as Pearl continues to support the specific model through its app. There aren’t a great deal of failure points on the unit, but depending on the region you’ll be driving, the elements might take their toll overtime. Pearl is a new startup, so we don’t have any historical data to reference, but the company was founded by three former Apple engineers, if that is any comfort.

Yes, if you’re in the market for a backup camera and don’t want to worry about drilling through your vehicle, the RearVision is a wonderful buy. It’s slightly expensive for a single-purpose gadget that you don’t use all the time, but unlike other backup cameras, there’s no hidden installation costs or cumbersome rigging to get it working, which alone makes it worth the price – even more so if it could save you from being in an accident.