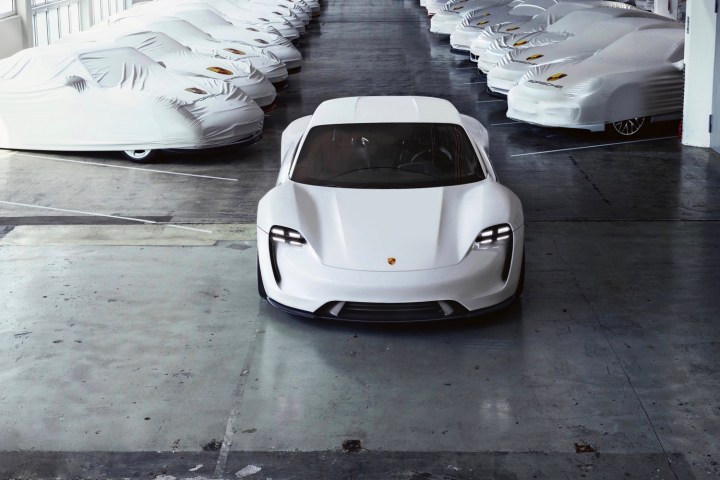 Porsche is getting serious about electric cars. The company is preparing to launch a long-range, high-performance sedan based on 2015’s Mission E concept within the next two years, and has earmarked $7.4 billion for development of all-electric and hybrid cars. In a company-conducted interview, Stefan Weckbach, Porsche’s head of electric vehicles, made it clear that the firm has a specific target in mind.

In response to Tesla’s claim that the Model S can do 0 to 60 mph in under three seconds, Weckbach said it can do that “only twice — the third attempt will fail. The system is throttled.” He may have been referring to software that limited the number of full-bore launches in order to preserve the battery powertrain components. Tesla said it removed this software after complaints from owners.

Weckbach said Porsche’s Mission E will boast “reproducible performance” including “a top speed which can be maintained for long periods,” qualities he apparently thinks are lacking in the Model S. He also said the Mission E will have the same sharp handling as Porsche’s current cars.

Overall, Weckbach said the Mission E will “deliver on the promises customers are already familiar with from our conventionally powered vehicles,” when it comes to performance. But Porsche will only go so far to make the Mission E “familiar” to existing customers. It won’t, for example, pipe fake engine noises into the cabin, which Weckbach considers a “gimmick.”

The Mission E will feature some driver-assist systems, but won’t be fully autonomous, Weckbach said. After discussions with customers, the company concluded that “Porsche drivers want to drive,” he said, adding that “no one believes that cars will be able to drive themselves in the short or medium term.” In the meantime, systems that allow a car to automatically inch forward in a traffic jam or crawl through a parking garage might be useful, Weckbach said.

Porsche’s mantra is “quick to charge, quick to drive.” The Mission E will feature an 800-volt DC fast-charging system that can add 250 miles of range (the car’s full range hasn’t been released yet) in 20 minutes. While Tesla built its own network of Supercharger DC fast-charging stations, Porsche will rely on parent Volkswagen for charging infrastructure. VW is currently working with other automakers on a European charging network, and is funding U.S. charging stations as part of the settlement for its diesel-emissions cheating.

Weckbach said Porsche will offer a “plug and charge” system, where customers simply need to plug in their vehicle to charge. However, he did not offer any other details, such as how a payment system would work or whether Porsche will offer free charging to customers. Those details will presumably be filled in closer to the Mission E’s launch.