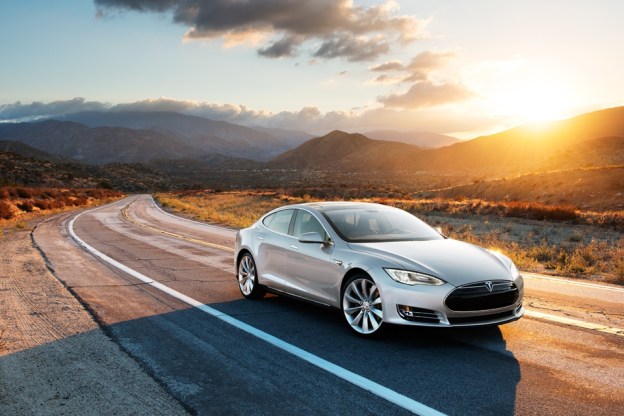 Battery-electric cars like the Tesla Model S and plug-in hybrids like the Chevrolet Volt are supposed to save the planet, not defile it with burnout marks, but who wouldn’t want to find out which is faster? The answer isn’t very surprising: in a drag race filmed by That Racing Channel, a Model S destroyed a Volt in the quarter mile.

Although it looks like the Volt got the jump on the Model S at the start, the Tesla pulled away with comedic ease. It finished the race in 12.562 seconds (still not fast enough to impress Dom Toretto) at 108.34 mph. The Volt could only manage 17.201 seconds at 80.36 mph.

The Volt’s electric motor has a mere 149 hp and 273 lb-ft. Its 1.4-liter four-cylinder gasoline “range extender” can contribute 83 hp, but the gasoline and electric halves of the Volt’s powertrain rarely work together.

One thing that was surprising about this lopsided matchup was how quiet it was. If you’ve never seen a drag race before, just listen to the rumbling engines in the background. That’s what they sound like at idle. They’re sonic weapons when the drivers put their feet down.

Is this the future of drag racing? It’s going to be hard to get used to noiseless speed, so we might consider installing noisemakers on any cars participating in our green drag race.

We also might try an apples-to-apples comparison. That means pitting the Model S against another all-electric car, like the Nissan Leaf, and lining the Volt up next to another plug-in hybrid, like the Fisker Karma.

On second thought, a Fisker versus Tesla drag race would probably be the most fun. Both companies claim to build the ultimate eco-friendly luxury sedan and, unlike Chevy and its more utilitarian Volt, both consider their cars to be performance vehicles.

With 403 hp and 959 lb-ft of torque, the Karma looks like it could put up more of a fight, although it does take 6.3 second to reach 60 mph compared to the Model S Signature Performance’s 4.4 seconds. Still, that theoretical race would probably be closer than this real quarter mile massacre.