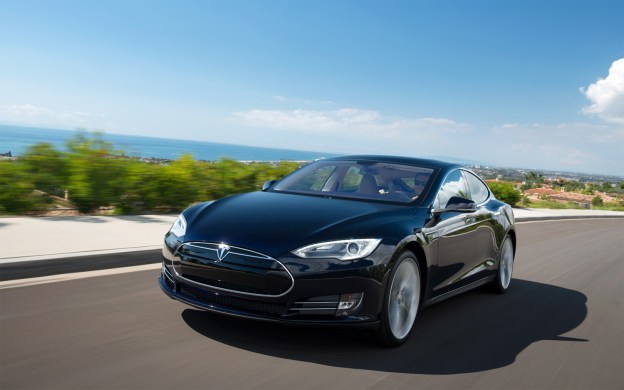 Battery swapping involves removing an EV’s entire battery pack and charging it separately, and installing a fully-charged pack. In theory, EV drivers would never have to wait for their batteries to charge, because they would be resupplied with fresh packs instead.

Tesla envisions fully-automated stations with the same battery-lifting robots used on the Model S assembly line. They can replace the car’s 1,000-pound battery pack without the driver getting out of the car. When the process is finished, the driver’s credit card is billed automatically.

Tesla CEO Elon Musk views this tech as not only making electric cars viable, but also turning the tables on internal combustion when it comes to convenience.

In the demo, which you can view here, Tesla staged a “race” between the battery swapper and a gas station. Two battery packs were swapped in the time it took to fill one Audi A8’s commodious gas tank.

Tesla says the battery swap takes just a minute and a half and will cost Model S owners between $60 and $80 a month. According to Forbes, this rate applies to Model S owners who make a return trip and pick up their original battery pack. They’ll also have the option to keep the swapped pack; if it’s newer Tesla will bill for the difference, and a warranty will be included. The original pack can also be shipped back to the Tesla owner for an additional “transport fee.”

The battery swapping stations will be built alongside Tesla’s “Supercharger” fast charging stations, which will continue to be free to Tesla owners.

The first battery swapping stations will open later this year along the Los Angeles-San Francisco corridor. The next phase of development will bring them to the East Coast and the Boston-Washington, D.C. corridor.

Tesla won’t be the first company to introduce swappable EV battery packs, but it could be the first to make the technology stick.

Better Place set up a network of battery swapping stations in Israel in 2008, but sales of its Renault Fluence Z.E. electric cars and service plans have been slow.