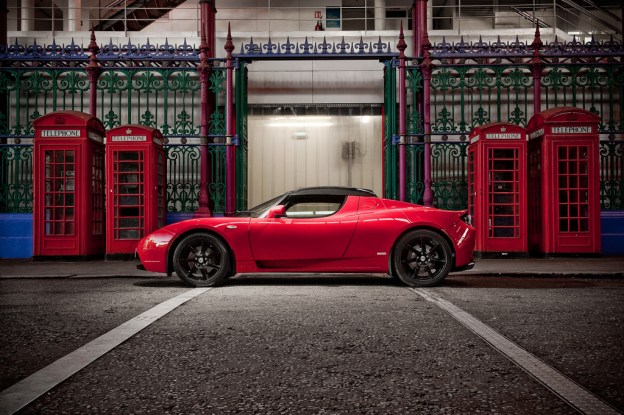 As electric cars become more popular, we are learning more about what it is like to actually live with them. According to theunderstatement, at least five Tesla owners experienced a major issue: after their car’s batteries were completely emptied, the cars became immobile “bricks” that could not be started or even moved.

If the charge in a Tesla’s lithium-ion batteries is fully depleted, the batteries are essentially destroyed. They can no longer hold a charge and, in the five documented cases, there was no power available to tell the motor to engage Tow Mode. Without the Two Mode, the motor stays engaged with the driveshaft (like a gasoline-powered engine when left in gear), making it impossible for the the car to roll freely, hence the “brick” scenario.

Unlike the Nissan Leaf, which shuts down completely before the battery is fully drained, Tesla Roadsters’ secondary systems stay on regardless of the battery’s state of charge.

According to the Tesla Roadster owner’s manual, the car takes 11 weeks to fully drain its battery after being fully charged. One owner left his car unplugged while his house was being renovated; it only lasted six weeks because he had driven the Roadster before putting it into storage.

Other owners did plug their cars in, but the power source was not able to keep the batteries charged. One used a 100-foot extension cord, which apparently reduced the amount of electricity flowing into the car’s batteries. Another owner, in Japan, plugged his car in only to realize that the voltages were incompatible.

Tesla is looking to expand its customer base with the Model S sedan and Model X crossover, both of which use lithium-ion batteries. Tesla claims the Model S can be parked unplugged for long periods of time without losing its charge, saying that “Model S owners can park at the airport for extended vacations without plugging in.” The Roadster loses fifty percent of its charge after seven days.

The “brick” scenario is not covered under Tesla’s warranty; the only remedy is to pay roughly $40,000 to replace the battery pack. According to theunderstatement, the Roadster owner’s manual does not include a statement about fully depleted battery packs needing to be replaced.

Tesla is aware of the problem, telling Jalopnik that emptying an electric car’s batteries is like driving a gasoline-powered car without changing the oil. In other words, it’s a maintenance issue, not a warranty issue. The company also claimed that “Tesla batteries can remain unplugged for weeks (even months) without reaching zero state of charge.”

In the same statement, the company claimed that it “avoids this problem in virtually all instances with numerous counter-measures.” Customers who bought the Roadster 2.0 can have the car alert Tesla when the battery is running low; the feature was not available on earlier models. Tesla also said that “all Tesla vehicles emit various visual and audible warnings if the battery pack falls below five percent SOC,” and that “Tesla provides extensive maintenance recommendations as part of the customer experience.”

Drivers of gasoline-powered cars never have to worry about their vehicles becoming unusable if they run out of gas, but they do have to fill them with fluids. Whether Tesla or its customers are at fault, the “brick” scenario shows that electric cars are still cars, and that they require their own unique form of maintenance.