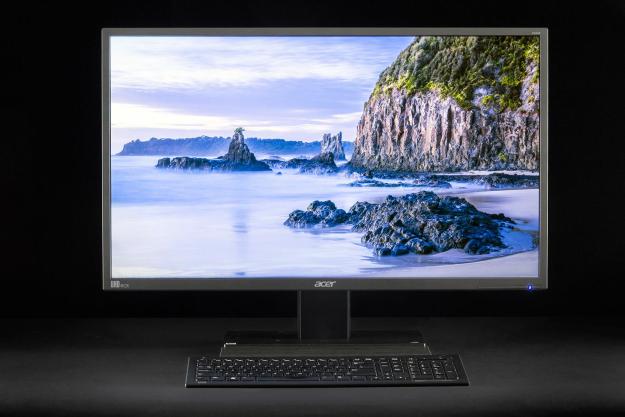 “The contradictions we found in the Acer B326HK prove that while 4K monitors are the wave of the future, the present has its imperfections.”

As the biggest companies in the PC industry have poised themselves for an explosion in demand for everything UHD, each is feverishly whipping its marketing and development divisions into shape to jockey for the top spot in what will inevitably become an all out slugfest for the coveted title of 4K king.

Acer is an early contender for that crown. With two models already available, one catered to gamers and one for the budget-conscious, the company is looking to up the ante with its 32-inch B326HK and target for customers who want the best of what 4K has to offer, even if they still aren’t sure what the “best” is supposed to look like just yet.

The first thing you’re notice about this monitor straight out of the box is its aura of no-nonsense practicality. It appears to stick to the mantra that function should always take precedent over form.

While the bezel isn’t the thinnest we’ve seen, it’s not the most cumbersome either.

Rigid and square, the casing and color palette of the B326HK is minimalist at best and a bit drab at worst. The bezel isn’t the thinnest we’ve seen, but it’s not the most cumbersome either, slipping itself neatly into the category of “not enough to notice, but still noticeable enough.”

The display’s excellent viewing angle is one of its high points, with image quality just barely starting to fade once your eyes are pinned to the very edge of the screen. If you do need to adjust for a better angle, you’ll find changing the tilt and height of the display is easy thanks to Acer’s ErgoStand. The sliding mechanism from top to bottom is effortless to the point of being able to make adjustments with just one hand.

A minor drawback is that unlike some of its competitors (as well as its cousin, the gaming-oriented XB280HK), the B326HK has no way to swivel from side to side independently of its base, nor can it quickly flip horizontally if you were so inclined to use it as a second screen. The option to remove the four bolts on the back and remount the display at a 90° angle is still there, though the process is labor intensive, and calling it a “feature” is a stretch. Both display and stand are VESA compatible, though, so an aftermarket stand is an option.

As expected with most high-end monitors these days, the B326HK comes equipped with a bevvy of available input options. These include DVI-D, an MHL compatible HDMI, DisplayPort 1.2 and mini-DisplayPort, all of which can be utilized independently for a single viewing experience, or in conjunction with one another simultaneously thanks to the display’s integrated picture-in-picture option.

Another four USB 3.0 ports can be found on the edge and underside of the monitor, making for quick and easy charging of your phone or tablet on the fly.

One problem we noticed after hooking up the monitor was the pitiful performance of the onboard speakers, which when sourced through HDMI barely registered above a couple decibels with volumes on the test machine and the screen itself completely maxed out. The dedicated audio-in jack didn’t fare much better when sourced both from an iPhone and a Macbook Pro, either.

That said, if you’ve got enough capital laying around to splurge on a screen like this ($1099 at list), chances are you can chip in another $100 to grab a decent set of desktop noisemakers which should make up for any sonic slack the Acer doesn’t pick up.

Too sharp for its own good

The display comes equipped with the same Acer eColor Management calibration system that has been a staple in most of their other displays for at least the past five years. It’s difficult to use, and we’d hoped a monitor of this quality and cost would come with its own custom set of on-screen tools built to effectively show its full spectrum of features.

The Super Sharpness feature only works well with static text.

It’s from this menu you can access the usual range of customization options that come standard on Acer’s rudimentary models all the way up to the luxury line, including adjustment of brightness, contrast, and gamma, as well as a six-way saturation and hue wheel that gives professionals the chance to dial things in to absolute perfection if that’s the route they choose.

Our favorite feature is the ability to create custom, hot-swappable color profiles that you can flip between at will depending on the time of day, the work you’re doing, or if you just want to settle in for a good movie or play a game.
Another interesting feature is Acer’s “Super Sharpness” which, when activated, automatically crisps the edges of fuzzy text and makes small fonts noticeably easier to decipher.

We tried the setting at both the 4K resolution and 1080p, and while I’d recommend those with eye strain issues give it a shot during long periods of reading or typing, the effect lost its luster when we switched to anything with the slightest movement involved.

When Super Sharpness was activated during a 4K viewing of House of Cards streamed on Netflix the compression artifacts (few as there were) became impossible to ignore, and it seemed like the display was struggling to keep up and compensate when actors moved from one edge of the screen to the next. In short, Super Sharpness only works with stationary text.

The Acer B326HK stuns anyone who sees it, an effect made all the better by the company’s decision to switch from the less vibrant (and cheaper) TN-based screen to a slightly glossy and significantly more stunning IPS panel.
Every color pops straight off the screen thanks to a gamut that hits a near-perfect 99 perecent on the sRGB scale and an impressive 77 percent of AdobeRGB.

The B326HK’s huge display looks great at a glance.

In our tests the gamma curve landed square on the money with at 2.2, but this achievement was offset by the color difference, which clocked in at a harsher score of 3.03. A difference of less than one is generally unnoticeable.
Contrast met our expectations with an average of 350-1 between all brightness settings, which when cranked to maximum ranked higher than almost every other display we’ve tested at a cornea searing 339.6.

It’s easy to condemn these results by comparing them to the other 32″ 4K monitor we’ve reviewed, Samsung’s U32D970. That display was almost perfect out of the box with deeper blacks, a contrast ratio of 460:1 and a gamut that covered 99 percent of sRGB and 96 percent of AdobeRGB. This isn’t an entirely fair argument, though, because Samsung’s masterpiece is twice the price.

Images, movies, and 3D renderings all looked incredible, and even with a few hints of pixel drag during some of the more intense scenes in The Avengers, everything in the frame oozed so much detail it was difficult to be disappointed once the Hulk showed up to smash everything in sight.

Gaming was just as spectacular as you’d expect on such a large and lush screen, but we did notice slight amounts of frame hop when things got particularly chaotic during a test round of Starcraft II. That said, the glitch was minor enough to not be too dentrimental, and was compensated by our ability to make out even the smallest of details in our army when things finally came down to the clutch.

Somewhat surprisingly, while blacks were richer and felt as though they contained a greater complexity of depth at lower brightness levels after our run with the Spyder4Elite, once we cranked the settings up past 75 percent we saw some problems.

While it could be better, this monitor screams ‘I’m the next big thing’ at a relatively low price’.

At maximum brightness the B326HK lost a decent amount of its core blackness after the calibration had run its course. Darker scenes lacked the clean edges we needed to discern one object from the next, a problem that wasn’t made much better by fiddling with the contrast while we tried to solve the issue manually.

Then again, do you really need your display to output almost 340 lux? Probably not. Setting brightness to 40-50 percent of maximum will be preferable in a dark room.

Color difference saw a marginal improvement, down to 2.46, and contrast saw a commendable jump to 410-1 and 420-1 at 50 percent and 100 percent, respectively. The color gamut ranked at an even 99 percent of sRGB, but lost a bit on the Adobe side, sliding down to 75 percent after two consecutive tests.

The results show that though some areas of the generic settings saw a bump in performance thanks to the secondary calibration, the B326HK still holds its own on the laurels of its factory defaults and doesn’t require a whole heap of tweaking if you’re looking for a monitor that rewards those on the hunt for a simple plug and play experience.

As with most of their higher end products, Acer offers a robust three-year warranty that covers defects or design flaws that may cause the unit to malfunction on its own. This includes everything from pixel death to mechanical failure of moving parts on the monitor, as well as any issues that might pop up as a result of shipping damages when a unit is purchased directly from their online store.

As with any new technology in an emerging market, there will be winners, losers, and an endless glut of experimentation lost in the middle of what’s released in between. It took years of tinkering by thousands of engineers from a dozen different companies before flatscreen TVs finally hit their stride, and we can assume the 4K revolution will follow in the same footsteps that its older, lower resolution ancestor did just a few short product cycles ago.

Acer has found a way to benefit from the relatively slim library of comparable options available on shelves at the tail end of 2014 by introducing one of the few large, affordable 4K monitors, but the shortcomings of the B326HK could make it vulnerable to new contenders that might emerge next year.

At the end of the day, if you’re an early adopter and absolutely have to have something on your desk that screams “the next big thing”, Acer has put out a respectable product that all but the most discerning videophiles will find pleasing.

If you’re willing to drop the extra cash, though, competing monitors from Samsung presents an alternative with better overall image quality. Acer’s 32-incher is also threatened by its own 28-inch displays, which offer similar image quality and the same resolution at a much lower price. The Acer B326HK makes the most sense to buyers who want a huge display without emptying their savings.