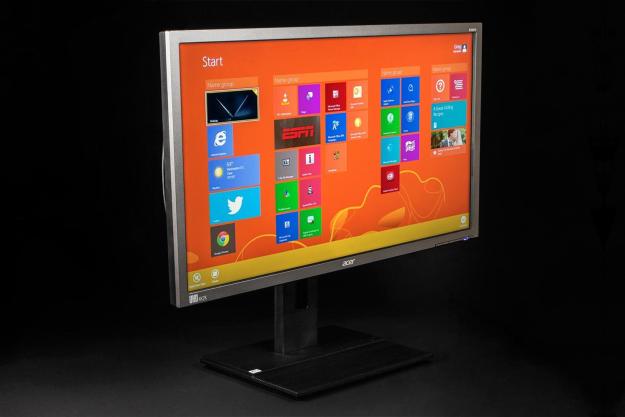 The price of 4K monitors has dropped precipitously. A year ago, if you wanted a 4K display, you could either buy a super-expensive 4K TV, or opt for Asus’ 31.5-inch PQ321Q, which generally sells for around $2,000 as of this writing. Now, there are more than a few 28-inch models around from the likes of Dell, Asus, Philips, and Samsung that sell for well under $1,000.

Acer’s 28-inch B286HK, with its $599 MSRP, is one of the least expensive 4K 60Hz panels you can buy. While testing and reviewing it, we even saw online pricing intermittently dip closer to $550.

Here’s what we think of it, and how it holds up.

Understated design with a wobbly stand

For a relatively affordable monitor, we mostly have good things to say about the Acer B286HK’s exterior design and features. It certainly isn’t flashy, as it’s slathered in matte black plastic.

However, the bezels aren’t much more than a half-inch thick. The stand offers 30 degrees of tilt, 120 degrees of swivel (60 degrees to the left or right), and about six inches of height adjustment. The screen also rotates into portrait mode, which can be a better viewing angle for consuming certain documents, like spreadsheets.

The one downside of the stand is that it’s wobbly. Tap the edge of the monitor (or stomp on the floor if it isn’t solid), and the screen bounces quite a bit. Considering that this isn’t a touchscreen monitor, that’s not a huge problem, but it may annoy you if your floor or desk isn’t very stable.

At least there’s a solution available. The screen has VESA mounting holes. This means that you can detach it from the stand, allowing you to mount it on a wall, an arm, or just a better stand.

The B286HK also has a built-in USB 3.0 hub. If you run the included cable from your PC to the monitor, you’ll get two down-facing USB ports under the bottom of the screen, and two more on the left side behind the bezel. This is a nice bonus feature, but the two ports on the bottom are tough to get to. You’ll want to use those for plugging in wireless peripherals, or other devices you don’t need to swap out often.

The HDMI port on the monitor also supports MHL charging. This means that if you plug your smartphone or tablet in this port, the battery won’t drain while you’re watching a video that’s housed on your phone.
Adjusting display settings (like brightness and screen presets) is done by using the six thin buttons on the lower-right edge of the screen. Navigating the on-screen menus without a four-way directional stick can be a pain. The good news is that the screen was reasonably well calibrated out of the box. Unless you do professional graphics work, you may not need to futz with the display settings much.

The monitor also has a pair of two-watt built-in speakers that don’t sound very good. They could be passable if you’re primarily looking to use this display for productivity purposes. However, you’ll generally get much better audio output from a decent set of $20 desktop speakers, provided that they’re from a reputable brand.

Viewing angles are good, but only from three sides

One of the hallmarks of an inexpensive display (particularly in laptops) is color shifting or loss of contrast when you’re not sitting directly in front of the screen. Images on the Acer B286HK look good when looking from wide angles from the right or left, although you do lose quite a bit of brightness at extreme angles.

The B286HK performs quite well for a budget panel overall, aside from an issue with viewing angles.

The same is generally true when looking at the B286HK’s panel from above. However, if you raise the screen up and look at it from below, colors quickly flip, giving a negative-like effect. This means that in these situations, the angles become more extreme, and many colors start to look white.

This generally won’t be a problem when using the monitor on a desk in standard landscape mode. However, if you rotate the screen vertically, the viewing angle issue shifts to the left side of the screen. So, if the monitor is placed even a little bit to your right, the image will be washed out to the point where you can’t use it. That also pretty much rules out using three of these screens in vertical orientation, in case you were considering a setup like that.

Out of the box, the images and video on the B286HK look good, but overall image quality isn’t quite as good as it could be. Color performance is pretty good, with the panel displaying 95 percent of the sRGB spectrum, and 73 percent of AdobeRGB (that’s just a bit less than the last monitor we looked at, AOC’s 144Hz-capable G2770PQU). The Acer monitor also has a slightly high (but not awful) average delta error of 2.46. This is higher than what you’ll get from good budget screens like Samsung’s S27D390H, and Acer’s K272HUL, but those are lower-resolution monitors.

The screen’s gamma curve of 2.2 was on target out of the box, indicating that grays and other colors should generally look pretty accurate. At the screen’s default (and maximum) brightness of 300 lux, (which is neither overly bright or dim for a desktop monitor), our Spyder4Elite calibrator told us that contrast is rated at 660:1, which is good. That’s better than what both the AOC G2770PQU (500:1), and Samsung’s S27D390H (630:1) managed.

After calibrating the B286HK, most of our measurements remained the same. The average delta error dipped to a much better 1.39, although the gamma curve also slipped slightly, down to 2.1. Maximum contrast dipped to 600:1, but that’s because we also dropped the brightness down to 270 lux.

When switching between pre- and post-calibration settings, the difference in image quality was definitely noticeable, but far from severe. Unless you’re doing professional image or video editing work, you should generally be happy with the image quality of the B286HK out of the box without doing any calibration.

However, we suggest that you drop the brightness down. 300 lux is very high unless you’re in an extremely bright room. Since the screen isn’t glossy, you won’t have to crank up brightness to combat glare.

We’ve established that the B286HK performs quite well for a 4K screen at this price. However, actually using a 28-inch screen running at is a mixed bag.

Games look outstanding, displaying oodles of extra detail you’d expect from a screen that has four times as many pixels as a 1080p display. But remember, to actually run modern games at high settings, you’ll need a lot of expensive graphics card grunt.

The good news is that the screen was reasonably well calibrated out of the box.

For productivity purposes, it’s nice to have so much room for multiple full-width windows. But while text and many menus look very crisp, they also appear tiny at their default settings in Windows. So, unless you have eagle-like eyes, expect to be sitting close the screen, and squinting at times.

Windows does let you scale up fonts and icons, which can help, but that also effectively shrinks the screen’s real estate. Plus, many programs, like Adobe CS6, don’t scale up. So the elaborate menus of Photoshop, for instance, will require precise mousing from you to access.

Much of this will change of course as software makers update their wares, but the 4K desktop experience can often be a little frustrating at this point. Even if all the programs we use were optimized for , we would still prefer a screen that was in the 30-to-32 inch range.

A brief refresher course on what hardware you need for 4K

Considering that many people still don’t have 4K monitors, it’s worth running through some of the current limitations and particulars of tech. This way, you’ll know what to look for in a high-end monitor, and whether or not your system is up to the task of powering a screen like the B286HK.

Otherwise, you’ll be stuck at 30Hz when running at 4K because of bandwidth limitations in older connectors and cables. 30Hz (which limits your monitor to displaying 30 frames per second) is fine for watching videos and basic productivity tasks, but not good for gaming.

Keep in mind that most modern LCD monitors run at 60Hz. Stepping down to 30Hz will be noticeable, even when you’re at the desktop. When you move your mouse around quickly, for instance, the motion won’t look smooth, which gets annoying fast. So, if you’re going to spend the money for a 4K monitor like the B286HK, you should probably also find a way get it to run at 60Hz.

You should also know that if you’re thinking about gaming at 4K, you’ll need very powerful graphics hardware to play modern games at high settings.

Games look outstanding, displaying oodles of extra detail you’d expect from a screen that has four times as many pixels as a 1080p display.

For instance, in Battlefield 4 with the settings maxed out on the Maingear Vybe, we consistently saw frame rates in the low to mid 20s when using the B286HK. Battlefield 4 isn’t the most graphically demanding game out there, and that’s with a fairly high-end AMD R9 290 graphics card in the Vybe. The R9 290 current sells for over $400.

For productivity purposes, a modest current-generation graphics card or integrated graphics chip will handle 4K just fine, though you’ll need a more powerful system to play back video. Plus, remember, you’ll have to connect via the monitor’s DisplayPort or Mini DisplayPort connectors. The B286HK also has an HDMI and a DVI port, but if you use those ports, you’ll be stuck at 30Hz.

If you’re willing to navigate the current complications of 4K tech, or you’re a gamer with the high-end hardware necessary to handle Ultra HD gaming and you don’t mind a wobbly stand, Acer’s B286HK is an excellent option—especially if you can find it for under $599. The B286HK performs quite well for a budget panel overall, aside from an issue with viewing angles when looking at the screen from below.

If you’ve been bothered by tiny text on a laptop before, you’ll probably want to wait for a 4K display with a slightly larger screen, or stick to a 27-inch monitor with a lower 2,560 x 1,440 resolution. That option will give you much more room for productivity than a 1080p screen, with less squinting required.