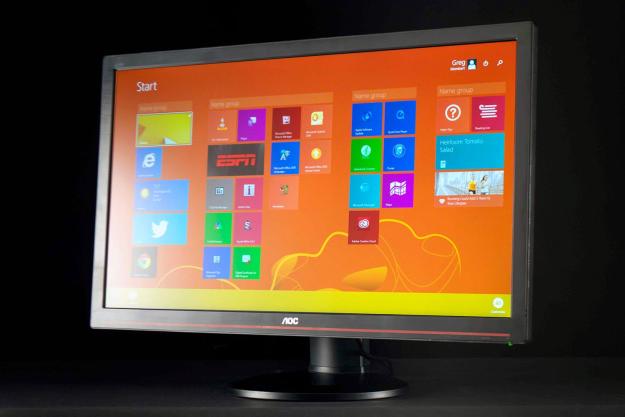 Gamers have a need for speed. Faster processors, better video cards, quicker hard drives; even the smallest upgrade can be worth the cost for hardcore PC enthusiasts. Yet, the most dedicated PC gamers often overlook the pros and cons of cheaping out when it comes to PC monitors, often settling on a 60Hz display that’s technically incapable of showing more than 60 frames per second of action.

This is as understandable as it is common. The selection of monitors offering refresh rates above 60Hz remains small, and gamers often feel that they have to choose between image quality and speed. Price has been an issue too, as monitors with high refresh rates can be expensive.

That’s not the case with the AOC G2770PQU, however. This 27-inch display offers a 144Hz refresh rate and 1080p resolution for an MSRP of $399, though online retailers often list it for just $350. While that’s more than what many 60Hz monitors cost, the price gap between this AOC and its 60Hz competitors is less than the price of a single AAA game on release day. So does the G2770’s quality match its peers, or is this monitor a one-trick pony?

What this monitor lacks in looks, however, it makes up with functionality. The G2770 ships with a broad circular stand that provides excellent stability. Tilt, height, and pivot adjustment are standard. It’s worth noting that these features aren’t found on many competitors. Both the stand and the monitor are VESA compatible too, so you can upgrade to an even better stand, or use the G2770’s stand with another display.

Users can choose to connect through DVI-D, HDMI, DisplayPort, and VGA. Four USB ports are available; two on the right flank and two on the rear panel. Aside from the two right-facing USB ports, all connectors face downward. Adding a new connection can be difficult, because the connectors are not readily visible.

The G2770’s on-screen controls are handled entirely by a handful of buttons on the lower right hand side. Though they’re a bit hard to find at first, they feel different compared to the surrounding material, and are easy to relocate once initially discovered.

Understanding the menu itself takes more effort, thanks to a few oddities. The left/right selection buttons, for example, navigate between different “tabs” with various options. Once you dive into a tab however, the left/right buttons suddenly control up/down instead, which makes getting used to adjusting settings a matter of trial and error.

The variety of picture settings offered here is modest. The typical trio of brightness, sharpness, and contrast is joined by a handful of gamma quality and color temperature presets. Precise RGB color controls are available only when color temperature is set to “user.”

Our initial impressions of the G2770’s image quality were mixed. Color performance was good, as the panel displayed 98 percent of sRGB and 75 percent of AdobeRGB while maintaining an average delta error of 1.76. This is on par with top-tier budget monitors like the Samsung S27D390H and the Acer K272HUL, both of which have 60Hz panels.

The AOC G2770PQU is a strong choice for any gamer who wants a big display at an affordable price.

Yet, the display was hazy, as if its image was rendered from behind a light fog. Our instruments pointed to gamma as the culprit. The G2770 reports a curve of 1.9, which is substantially off the target of 2.2. This problem appeared in color accuracy tests as well, where all gray-scale hues reported a delta error above three. Both results are worse than what the competition offers, especially the Acer K272HUL, which ships with nearly perfect gamma straight from the factory.

Our contrast tests recorded a ratio of 500:1 at the factory default brightness of 300 lux. Most users will need to turn down the back-light, as 300 lux is too high for comfortable use in a dim room. Plus, the monitor’s matte coat makes the excessively brilliant back-light unnecessary. Out-of-the-box contrast is a bit below average, as the Samsung S27D390H hits a ratio of 630:1, and the Acer K272HUL manages 540:1.

Keep in mind that this is a 1080p display. That’s expected given the price, but expectations can’t fix problems. Fine fonts and small interface elements lack the sharp, crisp look provided by 2560×1440 resolution.

While the G2770’s image quality slightly lags competitors, its motion performance is unquestionably superior. We tested the display by playing League of Legends (which hits very high framerates on our test rig) and viewing high-speed animations. We noticed no motion blur or ghosting in either test, and League of Legends felt particularly responsive and smooth. Gamers looking for the smoothest and most responsive experience possible will be quite happy with the AOC G2770PQU.

Clearly, the G2770’s image quality leaves something to be desired in its factory state. The display doesn’t look bad, but it’s also far from ideal. So, we fired up our calibration tools to see if it could be improved.

Both gamut and color accuracy changed little. Gamut readings remained identical, and calibration decreased the average delta error from 1.76 to 1.44. Improvement is always a positive, but a change this slim is difficult to notice, even in a side-by-side comparison.

The gamma curve, however, improved from 1.9 to 2.0, and it made all the difference. Grayscale accuracy, which had an average delta error of three, suddenly dropped to a delta error below one in five out of six grayscale hues. This completely eliminated the hazy look that soured our initial impressions.

Decreasing brightness also reaped rewards. We calibrated the display to 120 lux, which is ideal for use in a dimmed room, and saw black levels drop by two-thirds (a sensible outcome, as we cut brightness by two-thirds).

The G2770’s looks are best described as generic.

Blacks looked downright inky at times, and the G2770 proved capable of rendering significant grayscale detail. This is a very important trait for a gaming monitor. Noticing an opponent in the shadows can mean the difference between fragging them, or you getting fragged.

Contrast remained mediocre, however. A ratio of 500:1 is low, even for an affordable 144Hz monitor, and it robs content of vibrancy that’s apparent on other displays. League of Legends, which is known for its bright and colorful graphics, looks a bit duller than usual as a result. This means the G2770’s speed comes at the expense of quality, though the cost is so low that many gamers won’t even notice.

The G2770PQU is not the most attractive monitor on the market, but it may be the best to offer a 144Hz panel. The fact that it offers image quality that’s nearly on par with the best budget 27-inchers we’ve tested is impressive given its $350 price tag. It’s also just a few bucks north of the Samsung S27D390H, and less than the Acer K272HUL.

AOC also deserves credit for refusing to nickle and dime its customers. This monitor could have shipped with two or three video connections and a cheap mount that only tilts. Instead, the company equips the G2770 with a high-quality ergonomic stand, and enough ports to match competitors that sell for twice the price. These features don’t improve image quality, but they do make the monitor easier and more comfortable to use.

There’s just one competitor that can hope to match the G2770’s value; the ASUS VG278HE. That monitor sells for $375 (in spite of its $499 MSRP) and offers many comparable features, including a height-adjustable stand. Frankly, choosing between these two monitors may come down to whichever is less expensive at the time, but we can say without hesitation that the AOC G2770PQU is a strong choice for any gamer who wants a big display at an affordable price.