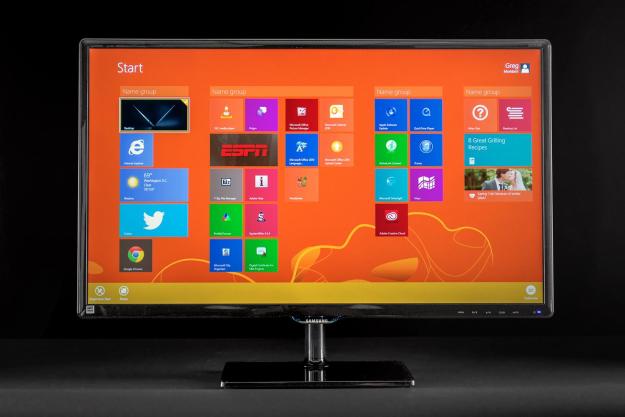 “Though not perfect, the Samsung S27D390H offers a huge panel, and outstanding image quality at a very low price.”

4K is the hot new thing in monitors but, for most people, it remains unaffordable. The practical benefit is not the availability of 4K, but the pressure it places on older monitors.

1080p is no longer impressive, and 27 inches of horizontal space is no longer massive. What once was special, has become mundane.

This has spurred a race to the bottom. Large monitors with 1080p or 1440p resolution have thrown themselves into a nosedive, each competing to become the value leader. Even Dell’s U2713HM, one of our favorites, is frequently available for almost $600. That’s a dramatic drop from its original $799 MSRP.

This is the market that the Samsung S29D390H has entered, and it appears to be fully conscious of what’s happening. The specifications look solid on paper; a 27-inch panel, 1080p resolution, and PLS panel technology. Yet, the MSRP is a shockingly low $309, and at major retailers like Amazon, this monitor sells for as little as $289.

A 27-incher with advanced panel technology for just $289 is something that would be hard to imagine three years ago. Should you take advantage of this monitor’s bargain price, or has the race to the bottom resulted in a collision with mediocrity?

You get what you pay for

1080p panels are cheaper than ever before, yet turning them into a product that can sell for a few hundred bucks is still difficult. Sacrifices must be made, and design is inevitably among the first features that get the axe. The Samsung S27D390H is no exception.

If all you care about is bang for your buck, Samsung’s cut-rate 1080p monitor is an excellent pick.

Cheap glossy plastic is the material of choice. The bezels, the display back, the stand; everything is plastic except the counter-weight on the bottom of the stand which helps stabilize the monitor. The display itself feels reasonably well-built, but the stand is flimsy, fragile and allows plenty of movement when the monitor is touched. Simply turning the display on can send it into a creaking wobble that lasts several seconds. Tilt is the only ergonomic adjustment, and users who want more are out of luck because the monitor lacks a VESA mount.

This bare-bones approach continues in the connectivity department, which is extremely limited. HDMI and VGA are the only inputs supported, and only the VGA cable is included in the box. While this arrangement is adequate, we would have liked to see DVI, as it’s common on PCs that are three to five years old. Users who lack HDMI output (and don’t want to use VGA) will have to buy a DVI-to-HDMI adapter, or stick with old-fashioned VGA.

The S27D390H is managed via a selection of touch-sensitive virtual buttons located in the lower right-hand corner of the display. These lack tactile response, and are difficult to use at first because the touch-sensitive areas are actually above the labels that state what each control does, rather than beneath them.

Once you activate the finicky buttons, you’ll find an old-fashioned series of context-sensitive menus that aren’t well organized. They do the job, to be sure, but we’ve used far better OSD systems in recent months.

The picture quality options are robust for a budget monitor, however. The typical trio of brightness, contrast and sharpness is present. They’re joined by color adjustments for red, green and blue, as well as five different pre-sets for color tone, and three for gamma. However, as is commonly the case, both color and gamma are labeled with vague preset names like “cool 1,” and don’t refer to any measurable standard.

The display is what matters

Though we were unimpressed by the S27D390H’s construction and connectivity, we were instantly amazed by its image quality which, even out of the box, is superb.

The highlight is color accuracy. Aside from cyan, which registered a Delta Error of just over five, every color showed an error score of one or less. Any DeltaE below one is generally unnoticeable to the human eye, so this monitor is very accurate.

The Samsung’s strong results paid off in subjective viewing. High-definition clips looked colorful and showed more depth than is typical for a budget display.

We were particularly impressed by several HD concert performances we viewed on YouTube. The performers appeared vibrant and lifelike, yet objects in the dimly-lit background were also detailed.

You can enjoy the monitor in any room because of its anti-glare coating and brilliant back-light, which generates up to 326 lux. Even direct sunlight isn’t enough to overcome this monitor’s brightness.

There is one downside when it comes to image quality; sharpness. 1080p resolution stretched across 27 inches is not impressive when viewed from only a few feet away. Fine fonts often appeared jagged and pixelated, which could make them difficult to read. We didn’t notice this problem much when viewing HD video, but instantly and constantly noticed it on the Windows desktop, and many websites as well.

The Samsung S27D390H isn’t a great choice for people who work with content filled with small fonts or other extremely fine details.

Most of the monitors we review have room for calibration, but the S27D390H’s great out-of-the-box results meant that there wasn’t much for us to enhance.

We did hope that calibration might expand the Adobe RGB gamut, but it stubbornly remained at 72 percent. Individual colors decreased and increased in accuracy by a few decimal points, but mostly stayed the same – even Cyan, which maintained a DeltaE of 5.01.

Our calibration process targets a brightness of 120 lux, which is ideal for use in a dark room. Adjusting the display to this standard decreased contrast to 570:1, but black levels were three-quarters deeper than at maximum brightness. We felt this improved quality overall, because dark scenes and images looked truly black rather than dark gray and, as was the case prior to calibration, the monitor offered robust detail in shadowy areas.

The lack of room for improvement means the gap between this monitor and others, like the Acer K272HUL, closes. Acer’s alternative offers identical post-calibration black levels, 100 percent of the sRGB gamut, and a slightly lower (but still very competitive) 540:1 contrast ratio. Acer’s alternative also provides slightly better post-calibration color accuracy, though you’d be hard pressed to tell the difference.

Choosing between the Acer K272HUL and Samsung S27D390H based on image quality alone would be almost impossible. Fortunately, Samsung’s option has a trump card that makes your decision easier: the price.

Acer’s K272HUL, which was $449 when we reviewed it, can now be had for $399. That’s a great price for a 27-inch monitor with excellent color accuracy, but the S27D390H undercuts it by more than a hundred dollars. That’s a huge gap, and it instantly makes Samsung’s option more attractive.

You pay for the Samsung’s low price in other ways, however. There are just two inputs, one of which is VGA. The stand is flimsy, and tilt is the only adjustment. Plus, the monitor isn’t VESA compatible. These issues are not insignificant, as they make the S27D390H more difficult to use comfortably, and less versatile overall. Some users will pass on this monitor because of these flaws, and we can’t fault them for doing so.

If all you care about is bang for your buck, Samsung’s cut-rate 1080p monitor is an excellent pick. You’ll be hard pressed to find a display that’s more accurate, and more vibrant for the same price.

Samsung Galaxy Tab S6: Everything you need to know