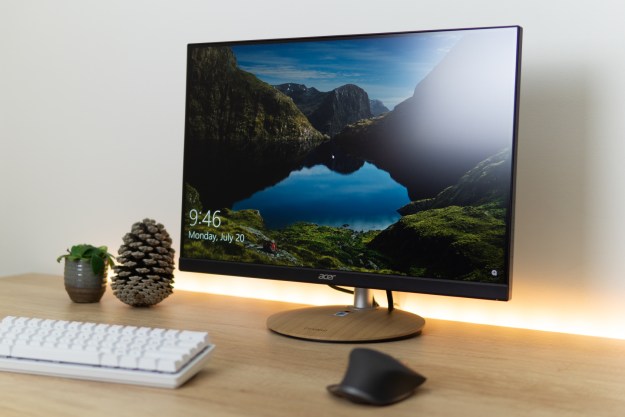 “The Acer ConceptD CM2 makes up for its small stature with astounding color accuracy.”

Creatives need to be picky about their choice of monitor. The higher the resolution the better, and accurate colors are a must.

But Acer thinks there’s a demographic out there who want that in a smaller package. Its new line of ConceptD monitors, aimed primarily at creative specialists, includes a 24-inch panel with 1,920 x 1,200 resolution. The Acer ConceptD CM2 packs a 16:10 aspect ratio, which is refreshing in a world where monitors seem to be getting wider and wider.

Despite the likable aspect ratio, it’s a far shot from the 4K 32-inch behemoths out there. Burdened with a $400 price tag, the Acer ConceptD CM2 has a lot to prove if it wants to win over the creative professionals it is targeting. Does the ConceptD CM2 do the trick?

When it comes to the styling of the Acer ConceptD CM2, I quite like what Acer has done. Taking the display out of the box, you’ll immediately notice the weighty stand with an imitation wooden base and anodized neck. The display’s neck simply screws into the base from below, after which you can easily snap the panel on.

You’re then met with a display that has height adjustments, tilt capabilities, can rotate to portrait, and it can even rotate side to side, so no matter the arrangement of your desk, you’ll be able to adjust the display to match your ergonomic needs. A VESA mount is present for those who want to use their own monitor arms, but you’ll lose out on some of the ConceptD CM2’s charm.

Artists who enjoy a tidy, Zen workspace will appreciate the calm, natural styling.

It’s not perfect, though. The ‘ConceptD’ text on the base — as well as the grain in the wood effect — doesn’t line up quite perfectly with the panel. It’s very close, and it’s just a small complaint that could be unique to our sample. But because the base rotates with the panel, we were unable to get the two aligned, even after re-attaching the neck to the base.

Once you ignore that bit, which isn’t difficult, it’s a lovely monitor to look at. The finish is nice, and it comes with a sleek bezel around three sides of the panel to complete the minimalist, almost Scandinavian look. Artists who enjoy a tidy, Zen workspace will appreciate the ConceptD CM2’s calm, natural styling.

When it comes to connectivity, Acer has opted to keep things rather simple. At the rear I/O, there is a main power plug, two HDMI ports, and one DisplayPort input. As these offer a way in for the audio channel, the display also comes with a pair of two-watt speakers built in. You can also connect external speakers or headphones with the 3.5mm audio jack.

As a display for creatives, it’s also nice to see a USB 3.0 hub integrated. One USB-B port handles the upstream connection, and then there is one USB 3.0 port at the bottom I/O and there are two more on the left side of the monitor.

However, there is one glaring omission: USB-C. I understand that many may not need it, but as a monitor aimed at creatives, I really expected some type of USB-C connectivity here with power delivery so that you can charge your laptop, power your display, play audio, and run peripherals all through one single cable. To be fair, it’s a bit more uncommon in monitor under $500. Of course, if you’re using this display with an older laptop or desktop this won’t be an issue, but it is something to consider in the interest of future-proofing.

Take, for example, the LG UltraFine 4K display. Although it comes in a few tiers higher for price, it packs a Thunderbolt 3 connection and can act as a docking station, making it a breeze to take care of all connectivity using just a single cable to the USB-C connectors on today’s laptops.

Out of the box, Acer’s monitor comes with factory calibrations for the sRGB, Adobe RGB, and DCI-P3 color spaces, which are easily selected via the OSD (on-screen display) control pad at the bottom right corner at the back of the monitor. Simply click it, hit the top button to go to color modes, and pick whichever profile you need.

In the OSD, there are options for custom calibration profiles (for your own calibrations), as well as the usual other options to change brightness, contrast, gamma, black boost, blue light, and more for perfecting the picture to your liking.

I like that the three most important options — color profiles, brightness, and input selection — are available at just the click of a button. No need to dig deep through menus.

The ConceptD CM2 comes with a 24-inch panel that has a 1,920 x 1,200-pixel resolution. That doesn’t give you a tremendous amount of screen real estate to work with, but the CM2 earns its brownie points in other places. The panel used is of the IPS type, which is still among the most respected when it comes to color reproduction and viewing angles.

The monitor has a listed peak brightness of 350 nits and a static contrast ratio of 1000:1.

The ConceptD CM2’s color accuracy blew me away.

When tested, we found that the monitor is able to exceed its listed maximum brightness and reach up to 392 nits, and got near its listed contrast ratio at 970:1. As promised, the display also covers 100% of the sRGB color space, 99% of AdobeRGB, and 97% of the DCI-P3 space. All of that is very impressive.

However, the display’s color accuracy was what blew me away most. Acer promises a Delta-E of < 2, but delivers much more. Our tests resulted in an average Delta-E of 0.45, with a minimum deviation of 0.18 and a maximum of 1.0. These results are better than every monitor we have tested and certainly make up for the display’s steep price.

We proceeded to calibrate the monitor ourselves to see if we could improve on Acer’s work, but as predicted, the results weren’t much better — in fact, we experienced a reduction in contrast and a slightly worse color accuracy with a Delta-E of 0.62, which is still phenomenally good. Calibrating the display ourselves did result in a 1% increase of AdobeRGB color space coverage, bumping that number to 100%, but all things considered, we would recommend using the factory calibration and a brightness that works for you and leaving the rest untouched.

Although it’s meant to be color-accurate and no more, Acer has equipped the ConceptD CM2 with a few goodies that make it good for gaming too. In the OSD, you can jump to the performance tab and you’ll find options for overdrive, adaptive-sync, an FPS counter, and quick response.

So, if for some reason you want to game on this display, you can switch on overdrive for fast responses, as well as adaptive sync for syncing your PC’s frame rate with the monitor’s refresh rate, which results in smooth, stutter- and tear-free gameplay.

Of course, you are limited to 75Hz on the refresh rate, but that’s a bump up from the standard 60Hz you find in most non-gaming monitors. If you’re just casually gaming, this actually results in quite a nice experience.

For competitive gaming, you’ll obviously want to look toward a gaming-focused, high-refresh-rate display such as the Razer Raptor 27 instead, but if you’re just firing up a casual title after a long day of work, the ConceptD CM2 can still fulfill that task better than most 60Hz monitors that don’t come with adaptive sync tech.

Acer’s ConceptD CM2 had us scratching our heads when we first received it, wondering why anyone would be inclined to pay $400 for a 24-inch Full-HD monitor. Promises of excellent color accuracy are often not delivered on, but Acer proved that stereotype wrong. The 24-inch ConceptD CM2 delivers extremely accurate colors straight out of the box, and our own attempt at calibrating the display did not yield any improvements — which tells us that if it’s color reproduction you’re after, you can happily purchase this display and trust its factory calibration for years to come.

It lacks the sharpness of 4K monitors, but you’ll be hard-pressed to find a $400 monitor with image quality this good.

The BenQ SW240 from two years ago comes in as the closest competitor, but it offers a less exciting design and a lower refresh rate at the same price, and is becoming increasingly difficult to come by.

However, if you’re willing to trade some of the color gamut and accuracy, the Dell UltraSharp 27 offers a higher resolution, nicer finish, and more connectivity at a similar street price.

Acer offers a three-year limited warranty on consumer and commercial monitors, which is a much-appreciated fallback on an expensive purchase such as this one. With an LED backlight, chances of a failure also low and color reproduction is likely to remain consistent throughout the years, though you may want to recalibrate it after a few.

The only big gripes are the omission of USB-C and low resolution, so do think twice about that before you’re left wanting.

Yes. If you’re looking for an editing monitor and your only concern is color accuracy, then the answer here is a resounding yes. If, however, you want more screen real estate, gaming performance, or value, then you might want to look elsewhere for a better balance of features and price.