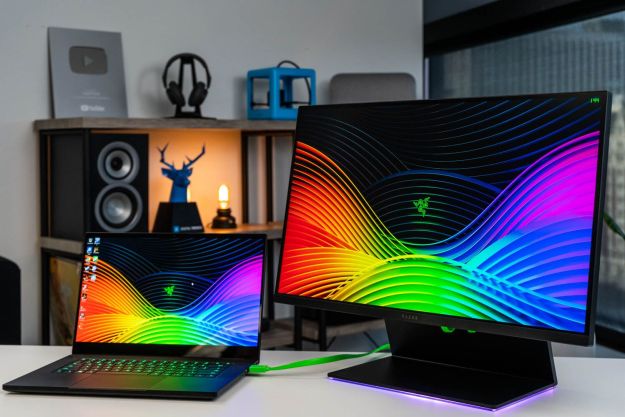 “With RGB lighting and an all-aluminum stand, the Razer Raptor 27 is an awesome and unique gaming monitor.”

You have every right to be skeptical about the the Razer Raptor 27.

It’s the company’s first attempt to build a stand-alone display. And it comes at a time when gaming-specific monitor features, like high refresh rates and G-Sync, have become common. It’s not inexpensive, either; at $699, this isn’t a purchase you’ll make casually.

Yet it will not disappoint you. Once I saw the unique design of it in person, once I witnessed its behemoth-like presence of it at my desk, and once I played games on it, I was convinced. Razer set out on a mission to build a truly unique monitor.

The Raptor 27 is gorgeous. Not a millimeter of the product lacks detail, whether it’s the thin bezels that frame the screen, the menu system, the cloth-like texture of the back, or cable management. Not a single element feels rely on the cheap plastics and ho-hum design that’s so common among monitors.

The Raptor’s base and stand are a single chunk of aluminum. And it’s a large chunk. The base and stand hold up the screen like someone who’s been bulking up their trapezoids at the gym. Even Apple’s 27-inch iMac, and it’s old Thunderbolt displays (rest in peace), aren’t as solid and robust.

The width of the stand is for more than just looks, though. It’s insanely sturdy and rigid, so if the screen wobbles, you can only blame your desk.

Raise the Raptor 27 to its highest point and you now have the ability to it flip back at a 90 degree angle.

Secondly, the wide stand creates space for one of the Raptor’s most interesting features. Built-in cable management. I’m sure you know how frustrating it can be to reach around the back of a monitor and feel for a cable or port. As someone that reviews a lot of PCs and monitors, it’s something I struggle with often.

Razer has an interesting solution to that problem.

Once you raise the Raptor 27 to its highest point, you also have the ability to it flip back at a 90 degree angle. That provides quick and easy access to your ports, right from the front. You don’t have to crawl under your desk or spin around the monitor.

Admittedly, it can only flip back once the monitor is at the top of its height adjustment, and that requires some effort. I wish it lifted a hair quicker, but I can understand the decision. The stiff mechanism does a great job of keeping the monitor’s position exactly where you desire.

The monitor’s green cables, included in the box, run from the ports through a slot and then down the back of the stand. It looks like a Razer-green slip and slide. They’re even held in place by removable magnetic slats. Popping off the slats and squeezing the thin cables is, again, a process that requires some effort. But once it’s all in place, the look is undeniably cool, and your cables will never get tangled up.

Being forced to use Razer’s flat, green cables is likely to be divisive. Not everyone will like the green color scheme, nor the flat design. You can, of course, use your own — they just won’t be guaranteed to fit under the stand’s slats.

Fortunately, the Raptor’s ports cover everything you could need. HDMI, DisplayPort, USB-C, and two USB-A ports are all along the bottom. Those USB ports are useful if you plan on using the Raptor with a laptop. There’s nothing quite like using the single-cable connection through USB-C, and then using those USB-A ports for peripherals.

The Raptor 27’s combination of a 144Hz refresh rate and G-Sync is the pinnacle of smooth PC gaming.

The one caveat with the USB-C port is charging. Many modern monitors can function both as a power and video source for your devices up to 25 watts, such as a 13-inch laptop. The Raptor 27 can only supply 15 watts, meaning it’s limited to smartphones and other smaller devices.

It’s a disappointment, but it’s not Razer’s fault. USB-C can’t deliver more than 100 watts of power, which wouldn’t be enough to power a gaming laptop, anyway. We’ll need another upgrade to the USB specification before that’s possible.

Razer offers just one version of the Raptor 27. In other words, it has a singular vision for what it thinks gamers want in a gaming monitor.

The Raptor measures 27 inches diagonally, the most common size of monitor for gamers. For the average-sized desk, it’s not overly large, but it fills your field of view from that distance.

What about resolution? The Raptor’s screen offers a 2,560 x 1,440 resolution, which is another good choice. Gamers with powerful, updated systems can enjoy 1440p at max settings. 4K is still out of reach for most, and the last thing you want to do is pay a fortune for a feature you’ll never get to use. 1440p is a nice happy medium, especially since the Raptor 27 has a 144Hz refresh rate.

That means the screen can refresh up to 144 frames per second without skipping frames. In other words, it delivers extremely smooth visuals for your fast-paced gaming. There are monitors arriving with 240Hz refresh rates, but few games and systems will benefit from refresh rates that high.

The Raptor also features G-Sync, which ensures that you don’t experience screen tearing or artifacts. The combination of a 144Hz refresh rate and G-Sync is the pinnacle of smooth PC gaming.

Games look fantastic. Thanks to the monitor’s resolution, great contrast, and vibrant colors, games of all sorts both play and look beautiful. Fast-paced action in Battlefield V or Assassin’s Creed benefit from that high refresh rate, while the high contrast ratio highlights the shadows of the environments.

You can find monitors that look better. The handful of OLED models available now, and throughout history, deliver better contrast. There’s also a select few 4K monitor, like the Acer Predator XB273K and Asus ROG Swift PG27PQ, that can defeat the Razer Raptor 27.

However, the Acer and Asus I just mentioned sell for $900 and $1,500 respectively. That’s a lot to pay for a monitor. Razer balances quality and price well. That’s a surprise. The Raptor 27 is a unique monitor, but its $699 price is a decent value relative to the monitor’s image quality and features.

Despite its surprisingly wide color space (100% sRGB and 91% AdobeRGB) and solid contrast, the Raptor hasn’t been calibrated for color precision. The average rate of color error was worse than monitors half this price. This is a common problem on that have a very wide color gamut. Calibration can help tame that, but photo and video editors should take note. You may not be happy with the Razer Raptor 27 if you task it with professional work.

Razer only offers one option, and though it’s good, it’s also expensive. You can find cheaper monitors with similar specs and features out there. You won’t find one that have the polish of the Raptor 27, though, and that makes it stand out from the crowd.

The closest direct competitor, though, is the Asus ROG Swift PG279QZ, which matches the Raptor 27 in every spec but sells for just $100 cheaper.

If you’re willing to downgrade to 1080p, one of the best alternatives is the new Samsung CRG5, which has a 240Hz refresh rate and G-Sync for just $400.

Want more options? Check out our favorite monitors of 2019.

There’s no reason the Razer Raptor 27 shouldn’t last you at least five to ten years. Monitors tend to be reliable, and the Razer feels durable.

Yes. It’s a bit more expensive than some of its competitors, but it lives up to the quality and design I expect in a Razer product.

Topics
The Galaxy Book 3 Ultra is Samsung’s most powerful laptop ever
Samsung Galaxy Book 3 Ultra vs. MacBook Pro 16-inch
Best HP laptop deals: HP Envy, HP Spectre x360, and more
We now know how Apple’s VR headset may handle video, and it’s pretty awesome
One of the best HP laptops you can buy is $250 off right now
Samsung’s 49-inch Odyssey G9 gaming monitor is $600 off today
GPU prices and availability (February 2023): how much are GPUs today?
The best PC power supply for 2023
ChatGPT has a new way to detect its own plagiarism
Nvidia may have another monster GPU in the works, and the price could be outrageous
AMD’s Ryzen 9 7950X3D pricing keeps the pressure on Intel
What is ChatGPT Plus? Everything we know about the premium tier
ChatGPT Plus to bring priority access during peak times — at a hefty price