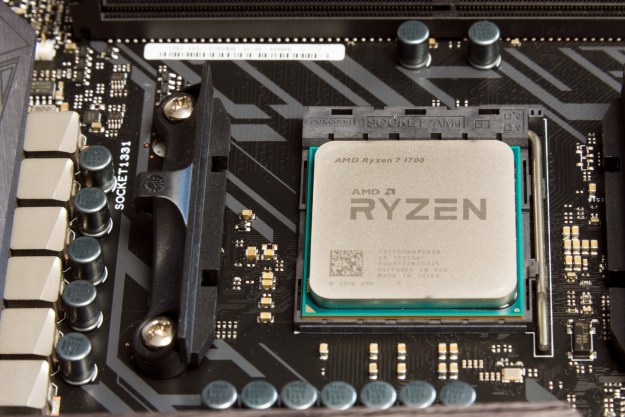 “Easy to overclock and powerful in multi-core workloads, the Ryzen 7 1700 is the best value CPU around.”

AMD is back — again. This time it’s Ryzen, a new processor line that’s a fresh start for not just the Red Team’s architecture, but its perception, as well. These powerful chips start at eight cores and sixteen more conventional threads, aiming to compete in an area where Intel charged a premium.

That means the $329 Ryzen 7 1700, the most budget-friendly of the line, is the chip most likely to draw users from those looking at Intel’s Core i7 Kaby Lake chips — specifically, the crowd favorite Intel Core i7-7700K. That’s a big ask, considering Intel’s current market position and prevalence in desktops and laptops alike.

With the odds stacked against it, the humble Ryzen 7 1700 hopes to escape the shadow of the flagship Ryzen 7 1800X by redefining value and multi-core performance. Does it pull off the task?

Ryzen to the challenge

This may be one of the first chips to feature AMD’s new Zen architecture, but the flagship chip is the Ryzen 7 1800X. For a full breakdown of the new architecture and chipset design and feature set, make sure to head over to our 1800X review.

There are some key differences between the high-end 1800X and the more modest Ryzen 7 1700. The lack of an “X” at the end of its SKU signifies it’s missing Extended Frequency Range. This feature falls somewhere between Intel’s Turbo Boost and an auto-overclock in concept, squeezing a bit of extra clock speed from Ryzen when thermals and power allows. Without it, the 1700 maxes out at its stated Precision Boost speed (unless you overclock it, of course).

Perhaps more importantly, the Ryzen 7 1700 only has a 65-watt Thermal Design Power, compared to the 95-watt TDP found on the 1700X and 1800X. Total power draw tends to have a noticeable effect on performance, and on a chip’s overclocking ability. With such watered-down numbers, the Ryzen 7 1700 is starting to look less appealing.

Close behind the pack

The Ryzen 7 1700’s obvious competitor is Intel’s Core i7-7700K, which retails for around $350. That’s at the top end of what we’d recommend for most users anyway, and right off the bat, the Intel chip claims a 4.2GHz base clock — a full 500MHz faster than the Ryzen’s boost clock.

But it isn’t a fair fight. More cores means lower speed across the board, and the Ryzen 7 1700 doubles the Core i7-7700K’s core count, so each core in the AMD chip runs quite a bit slower. The Ryzen 7 1700 boasts a 4MB L2 cache, and a 16MB L3 cache, over twice the 8MB of Smart Cache found in the Intel offering. There are minor advantages on both sides, so let’s see how things shake out.

We’re running a wider than average suite of tests on these chips, which should give us a better idea of where each processor excels. In addition to the typical GeekBench synthetic test and Handbrake 4K conversion, we’re also running Cinebench R15, 7-Zip’s built-in benchmarking tool, and the Octane and Kraken browsing tests, both run in Chrome.

As you might expect, the Ryzen chips’ extra cores allow them to take a strong lead in any test that makes efficient use of them. The Ryzen 7 1700 steals a victory from its rival, the Core i7-7700K, in both the GeekBench 4 multi-core test, and the 7-Zip compression/decompression task.

It can’t keep up with Intel’s Core i7-6950X of course, but it doesn’t go down without a fight. Particularly when you consider the Ryzen’s price point, which is less than one fifth the Intel flagship. Even somewhat competitive performance is a pleasant surprise.

Of course, one of the biggest questions about Ryzen is whether it fits into the gaming world, or whether Intel still has a stranglehold on that market.

A player, but not the champion

PC gaming remains one of the most prominent uses of high-end hardware in home systems, and unfortunately for AMD, it’s also a task that rarely uses more than four cores. That means the sprawling Ryzen 7 1700 is at a disadvantage, and the Core i7-7700K’s higher clock speed packs a lot more punch.

Depending on the title, the difference between the two is either a wash, or an advantage for the Intel Core i7-7700K. It’s much more prominent in Sid Meier’s Civilization VI than it is in more graphics-heavy games like For Honor. The 3DMark synthetic Time Spy test is almost a tie from all sides, which is evidence that neither chip is a bottleneck for the GPU.

However, the overall victory here goes to the Intel Core i7-7700K, depending on the game. Most modern games don’t use more than four cores, and the Intel Core i7-7700K’s first four are faster than the Ryzen 7 1700’s. If gaming is all you plan on doing with your system, it’s hard to argue Intel’s Core lineup aren’t still a better choice.

Push it to the limit

Pushing a chip outside its normal performance boundaries has long been a pursuit of the tinkerer looking to squeeze more productivity out of their hardware. AMD’s Ryzen Master, which you can read about more on our Ryzen 7 1800X review, has taken the process out of the BIOS, which can be daunting for the uninitiated, and brought it into an easy to use piece of software.

We slowly bumped the clock speed and voltage on our Ryzen 7 1700 until we felt we had reached a stable 3,850MHz overclock. We might’ve been able to push higher by bumping the voltage further, but at 1.35V, we were starting to get nervous about frying this low-power chip. We’re using a Noctua NH-U12S to cool the chip, a beefy air cooler with a generous heatsink and 120mm fan.

After overclocking the snot out of the Ryzen 7 1700, performance improves dramatically. The chip immediately picks up the energy level and joins the peloton. Depending on the workload, the chip now manages to trade a few blows with even its older sibling, the Ryzen 7 1800X.

We’re not saying it’s a better chip in all situations, but it’s hard to argue with the value proposition here. For once, spending less and putting in a few minutes tweaking the software could save you some serious benefit. AMD recently sent us a massive 240mm EK closed loop liquid cooler as well, so be on the lookout for even more extreme benchmarking results on the Ryzen 7 1700.

The Ryzen chips include a three-year warranty, which is similar to the Intel Core i7-7700K, and an industry standard. It doesn’t cover damage from overclocking or improper installation, so take it slow if you decide to lift the hood.

Why spend more? As it turns out, AMD’s Ryzen 7 1700 offers the best value of any of the new chips at just $329, provided you’re willing to roll up your sleeves and spend a little time overclocking. Thankfully, AMD has made the process dead simple, which is sure to help convert would-be tinkerers into masters of speed. The extra cores may not count when it comes to gaming, but there are a lot of folks out there with home workstations and video editing rigs for whom this chip is an excellent fit.

Intel’s Core i7-7700K still beats out the Ryzen 7 1700 for the same price point, at least in some tests, and is likely the best choice for most users looking for high-end consumer hardware, at least when it comes to gaming. If your workload involves highly-optimized tasks, including video encoding and editing, streaming, or computational tasks, the Ryzen 7 1700 takes a lead, particularly if you spend the time overclocking it — which you absolutely should. It just depends on your workload.

We have no reason to doubt that the Ryzen 7 1700 will last just as long, if not longer, than competing chips from Intel. The extra cores will only become more relevant as processors with that many threads become more common, and as developers work to expand workloads past more common four core systems. Beyond that, AMD has promised to continue supporting and releasing products for the AM4 chipset until at least 2020, which gives you an even better upgrade path.

Yes, if your workload consists of more than just gaming. Most moderns games have little use for anything beyond four cores, so the sacrifices you make in clock speed and single-threaded optimization for more threads doesn’t mean a whole lot. If you often find yourself encoding video, rendering objects, streaming, or running computational tasks outside the GPU, the Ryzen 7 1700 offers a healthy boost to performance without the same costs associated with extra cores on the Intel side of the aisle.

Topics
The best motherboards for 2023
The best budget laptops for 2023
What is AMD 3D V-Cache? Extra gaming performance unlocked
AMD Ryzen 9 7950X vs. Ryzen 9 7950X3D: 3D V-cache compared
HP 72 Hour Flash Sale: The 6 best laptop deals, from $250
Samsung’s first QD-OLED gaming monitor might be dead on arrival
Latest Dell sale sees must-have laptops starting from $380
Chrome’s take on Nvidia DLSS is set to launch, but you can’t use it yet
Lenovo Yoga 7i 2-in-1 laptop just got a $700 price cut
Google’s new Bard AI may be powerful enough to make ChatGPT worry — and it’s already here
Why you probably shouldn’t buy the $599 M2 Mac mini
Samsung’s 34-inch Ultra-WQHD monitor is $200 off right now
This HP gaming PC with an RTX 3080 is $700 off