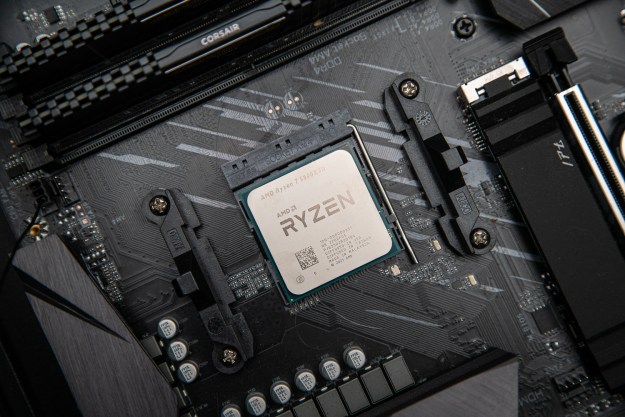 “The Ryzen 7 5800X3D is a proof of concept that stumbled into being the world's fastest gaming CPU.”

The past year has been a tight battle between Intel and AMD to release the best gaming CPU. AMD held the lead with Ryzen 5000 before being leapfrogged by Intel’s 12th-gen processors, but Team Red wasn’t content to rest on its laurels. The Ryzen 7 5800X3D is here to cement AMD as the champion once again.

It has the performance of a flagship CPU with midrange pricing, far outpacing anything else that AMD or Intel has to offer when it comes to gaming. General CPU performance is down, as expected, but gamers who want peak performance can stop searching: The Ryzen 7 5800X3D is the best gaming CPU you can buy in 2022.

The Ryzen 7 5800X3D is mostly identical to the Ryzen 7 5800X. It features the same eight Zen 3 cores, but they’re tuned slightly lower (a 400MHz loss on the base clock and 200MHz loss on the max boost clock). It’s not a great option for applications that are sensitive to core count or frequency, but that’s not the point of the chip.

As I’ll dig into below, the chip offers flagship performance on the level of the Ryzen 9 5950X and Core i9-12900K — both processors that cost north of $600. For gamers, the Ryzen 7 5800X3D is a steal, despite the fact that it’s the last processor that will use AMD’s storied AM4 socket.

AMD isn’t just adding more cache. It’s stacking the cache on top of the chip by shaving down the die and passing through connections directly. That means the Ryzen 7 5800X3D is able to access a massive pool of cache at breakneck speed, all while maintaining the size of a standard Ryzen 5000 processor.

It’s billed as a gaming CPU, and cache isn’t usually a big discussion point when it comes to games. But by stacking 64MB on top of the 32MB already on the Ryzen 7 5800X, AMD is giving the CPU a lot more room to process instructions without fetching them from system memory. Anyone who has used Ryzen 5000 before knows that memory speed plays a big role in gaming performance, so it shouldn’t come as a surprise that a boosted cache represents a big performance gain, too.

What’s important to know is that your OS sees the cache as a shared 96MB pool, not as separate 32MB and 64MB chunks. Adding more cache always increases latency, and as many early Windows 11 adopters learned, cache latency is a killer in games. AMD says that the performance gains vastly offset that increased latency, however, which shows up in my test results.

I didn’t focus too much attention on general CPU performance because we’ve been here before. The Ryzen 7 5800X3D isn’t a great option for general processor performance. It’s slower clock speed and eight cores mean it falls vastly short of the flagships it can compete with in games.

It’s not a bad option, but even the Ryzen 7 5800X would be a better choice if you’re not concerned with gaming. You can see how the 3D-stacked model takes a loss in single-core performance in both Cinebench and Geekbench compared to the Ryzen 9 5950X. All of AMD’s Ryzen 5000 processors fall within a certain range in these benchmarks, but the Ryzen 7 5800X3D’s slower clock speed mean it trails the pack.

Multi-core performance isn’t great either because there are only eight cores, and they top out at around 4.3GHz based on my testing. The only oddball was PugetBench, where I was hopeful the increased cache would give the Ryzen 7 5800X3D a leg up. It doesn’t.

Now for what the Ryzen 7 5800X3D is all about: Gaming. You can see the Geomean results above, showing how the processor stacks up on average to other flagships. I ran all of my tests at 1080p with an RTX 3090 and 32GB of DDR4-3200 memory, short of Halo Infinite, which I ran with an RTX 3070. For settings, there’s a mix of High to Ultra depending on the game.

The gains aren’t always as stark, particularly in GPU-limited games. It seems graphically demanding open-world games don’t benefit as much from the additional cache, as evidenced by Red Dead Redemption 2 and Cyberpunk 2077. Forza Horizon 4 was the odd one out, with a solid 6% increase over the Ryzen 9 5950X.

In a test like 3D Mark Time Spy, the processor doesn’t show its power. But in real games, like in Civilization VI’s turn time benchmark, the Ryzen 7 5800X3D offers big improvements. AMD is offering better gaming performance for less money, with fewer cores and a slower clock speed.

If nothing else, the Ryzen 7 5800X3D is a sign of what’s to come. Although there are outliers, it’s clear that additional cache offers improvements in games beyond the IPC chase that’s been going on for the better part of 30 years.

The extra cache isn’t free on the Ryzen 7 5800X3D. Although it doesn’t draw nearly as much power as the Core i9-12900KS, it gets a little toasty. During a multi-core Cinebench R23 run, the chip peaked at 86 degrees Celsius under a 240mm all-in-one liquid cooler. During the run, however, it only pulled 101 watts at its peak.

That’s not a dangerous temperature for brief, intense workloads like Cinebench. However, it shows why AMD chose to disable overclocking on this chip. The all-core frequency during this run was 4.35GHz, and pushing it any higher would bump right up against the chip’s maximum operating temperature of 90 degrees.

In the single-core test, the processor reached 4.45GHz while consuming significantly less power — just shy of 36W at its peak. Temperatures were much better, too, peaking at 52 degrees Celsius. This is more in line with what you should expect out of the Ryzen 7 5800X3D, with temperatures nearing 60 degrees Celsius with most workloads.

We’re a far cry from the power and heat levels of Intel’s competing processors, but the Ryzen 7 5800X3D still runs a bit hotter than the rest of the Ryzen 5000 range. You don’t need to invest in a new CPU cooler, but it’s something to keep in mind.

The Ryzen 7 5800X3D delivers on AMD’s promise of releasing the world’s fastest gaming CPU. It’s rare we see a CPU specifically tuned for gaming, but AMD shows that a design goal like that works. Of course, it loses the race in the Cinebench/Geekbench battle, but for gamers, that doesn’t matter.

There’s nothing quite like the Ryzen 7 5800X3D due to its unique packaging technology and massive pool of L3 cache. The closest thing would be either the Ryzen 9 5950X or Ryzen 9 5900X with their 64MB pools. In terms of performance, Intel’s Core i9-12900K gets close, but it’s around $150 more expensive and still not as fast in games.

This is the killer. The Ryzen 7 5800X3D is the last CPU to use AMD’s AM4 socket, so upgrading now means that you’ll need to buy a new motherboard when you swap your CPU in the future. It should last for several years in gaming, but if AMD applies this technology to its next-gen chips, we’ll likely see even larger jumps in gaming performance.

Yes, but only with the understanding that you’ll need a new motherboard down the line. As impressive as it is, the Ryzen 7 5800X3D is a little tough to recommend simply based on the time it launched and where future CPU generations are headed.

Topics
AMD Ryzen 9 7950X vs. Ryzen 9 7950X3D: 3D V-cache compared
The best processors for gaming: AMD and Intel face off
AMD Ryzen 5 7600X vs. Ryzen 5 7600: is cheaper better?
AMD may have just leaked the Ryzen 9 7950X3D release date
Save $620 on this Lenovo gaming laptop with an RTX 3070
AMD vs. Intel: which wins in 2023?
Dell is having a big sale on business laptops — up to $2,500 off
Ends soon: sign up for NordVPN today and save up to 62%
New AMD laptop CPU destroys its predecessor, winning by 90%
Lenovo is practically giving away this 2-in-1 Chromebook today
This micro-LED advancement is exactly what AR and VR needs
An AI-generated TV channel is mimicking ’90s sitcoms to nightmarish effect
LastPass vs. 1Password: should you switch?