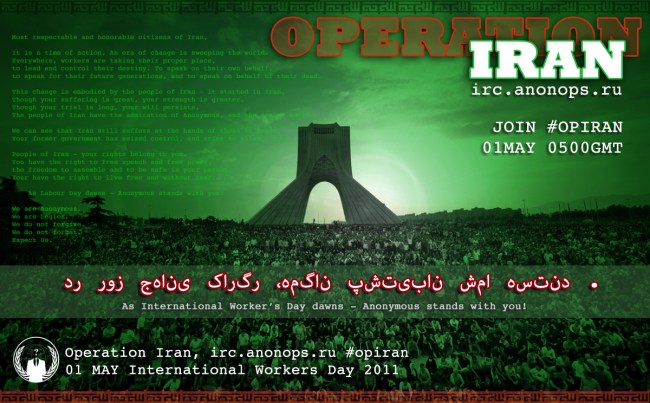 This should really convince Sony that Anonymous has bigger fish to fry. The Hacktivist group Anonymous announced this weekend that it has set its sights on Iran. “Operation Iran” officially began yesterday at 1 a.m. EST; the attacks correspond with International Worker’s Day.

“People of Iran – your rights belong to you. You have the right to free speech and free press, the freedom to assemble and to be safe in your person. Your [sic] have the right to live free and without fear. As Labour Day dawns – Anonymous stands with you!” the group announced.

After rising to further infamy in light of its WikiLeaks support, and offensive efforts against corporations turning their backs on the government transparency organization, Anonymous has taken a different route as the Facebook Revolutions and demonstrations have swept across Northern Africa and the Middle East. The group has declared to help the citizens of these oppressive regimes by shutting down government-run sites, including those that censor online material deemed unsafe or offensive. Anonymous has largely relied on DDoS attacks to flood servers and crash websites–a fairly unsophisticated tactic–but there have also been incidents in which the hacktivists have been able to manipulate code and break into a site’s database, giving them access to confidential data (such as in the case of HB Gary, when Anonymous published private company correspondence).

When it comes to ridding the world of free speech oppressors, Anonymous couldn’t have chosen a more appropriate target. Iran was recently voted the worst country in the world for Internet freedom, and it’s progressively getting worse. According to Freedom House, “since the protests that followed disputed presidential elections in June 2009, the Iranian authorities have waged an active campaign against Internet freedom.” The government has used various means, including slowing connection speeds, torturing, and in one case killing, bloggers. Propaganda sites have run rampant, and an organization called the Iranian Cyber Army (in league with the government), has shut down sites of demonstrators. In March, it was revealed that a series of failed attacks on major websites had originated from the Iranian government.

Iran isn’t Anonymous’ only objective. In a press release yesterday, the group also announced “Operation Blitzkrieg,” an effort to take down Neonazis.