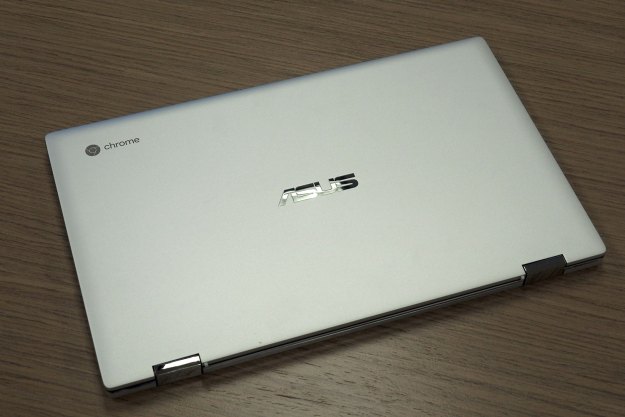 “The Asus Chromebook Flip C434 will let you get your work done in comfort and style.”

The Asus Chromebook Flip C302CA was one of our favorite Chromebooks when it was released in 2017. Asus has finally replaced it for 2019, with the Chromebook Flip C434 that uses smaller bezels to fit a larger screen size into a reasonably small chassis while also including the latest components.

Asus sent us a midrange configuration of this laptop, with an Intel 8th-gen low-power Core i3-8100Y CPU, 8GB of RAM, 64GB of eMMC storage, and a 14-inch, 1080p display. The configuration costs $570, which sits in the midrange of how Chromebooks are priced these days.

The Chromebook market, just like the Windows 10 space, is getting crowded with 2-in-1 devices. Does the Chromebook Flip C434 offer anything to entice buyers away from the myriad of competitors?

The Chromebook Flip C434 is a well-built laptop for $570. Acer constructed the 2-in-1 of aluminum alloy, and that gives it not only some structural rigidity that rivals premium laptops but also some modern good looks. The hinge is a bit stiff, requiring two hands to open, but it does keep the display in its place in each of its four modes – clamshell, tent, media, and tablet.

The chrome chamfered edges add a bit of flair, and the chassis bottom has angles in all the right places. As a whole, the aesthetic doesn’t tend toward bling but rather an understated demeanor, and it works. Kudos to Asus for making a reasonably priced laptop that not only looks good but feels like a million bucks.

We’ll also note that Asus has applied some of its tiny-bezel expertise to the Chromebook Flip C434, giving it a modern look for a budget laptop. The 87 percent screen-to-body ratio doesn’t quite match the 92 percent or higher ratios of the most modern tiny-bezeled Windows 10 laptops, but it’s better than most. That makes the Chromebook Flip C434 smaller than other 14-inch Chromebooks like the Acer Chromebook 514, and it’s also thin at 0.61 inches and relatively light at 3.1 pounds.

Typing, swiping, and tapping are a joy

One component that often gets short shrift on budget laptops is the keyboard, and the Chromebook Flip C434 is a welcome departure. It enjoys an island keyboard with full-size keys that provide sufficient travel and a snappy mechanism. All five of the usual Chrome OS backlight levels are present. This isn’t as good a keyboard as you’ll find on expensive Windows 10 laptops like the HP Spectre x360 13 or the Dell XPS 13, but it’s better than a lot of laptops at this price.

Asus has applied some of its tiny-bezel expertise to the Chromebook Flip C434.

The touchpad is equally as good. It’s smooth and comfortable, and it supports all Chrome OS multitouch gestures with reliability and precision – making it among the best Chromebook touchpads around. Thankfully, the buttons also have a nice click without being too loud.

The touch display works well, too, meaning you can easily swipe through long web pages with just your thumb. Of course, you’ll need that touch panel when you flip the display around into tablet mode.

The display and audio are a bit underwhelming

The Chromebook Clip C434 uses a 14-inch Full HD display that is welcome at this price, and it’s sharp enough for all but the most dedicated pixel-peepers. It’s in the 16:9 aspect ratio, alas, meaning, in general, we’re still waiting for manufacturers to transition to more productivity-friendly 3:2 or 16:10 aspect ratios across the board. The HP Chromebook x2 has a 3:2 ratio and we like it a lot.

We can’t test Chromebook displays using our colorimeter thanks to a lack of software. But we can provide a subjective evaluation, and to our eyes, the Asus Chromebook Flip C434’s display is decidedly average. It doesn’t get incredibly bright, and it doesn’t have class-leading contrast. Colors are pleasant and seem accurate enough for productivity work, but creative types might be disappointed.

When we watched our test Avengers trailer during our battery testing, we found the image to be slightly too dark, implying that gamma may be a bit off. It was still a pleasant enough experience. In general, the display left us satisfied but not excited. The HP Chromebook x2, Acer Chromebook 13, and Google Pixelbook all have much better panels that put them in a different class.

Audio quality was also average. Volume didn’t get very loud but still suffered some minimal distortion, which makes it even less suitable for larger rooms. Mids and highs were present enough with the usual lack of bass. We suggest you pull out some headphones if you want to listen to some tunes or a Bluetooth speaker if you want to binge some video with a few friends.

We can’t put Chromebooks through quite the same suite of benchmarks as Windows 10 and MacOS laptops, but we can easily tell a well-performing Chromebook from one that falls behind. Right off the bat, it’s obvious that the Asus Chromebook Flip C434 has enough power to keep most Chrome OS productivity users happy.

The Asus Chromebook Flip C434’s display left us satisfied but not excited.

Our review unit came equipped with the Core i3-8100Y, a dual-core low-power CPU that would leave Windows 10 laptops wishing for more power. But Chrome OS eats it up, and we saw little if any lag as we opened multiple Chrome browser pages and ran a few Android apps on the side. It’s not as fast as the Acer Chromebook 13 with its full-power, quad-core Core i5-8250U CPU, but it’s competitive with the HP Chromebook x2 with its 7th-gen Y-series processor.

In the Speedometer 2.0 web benchmark, which tests how fast Javascript apps can load, the Chromebook Flip C434 managed a score of 71 compared to the Acer Chromebook 13’s 88.6. The HP Chromebook x2 was slightly faster at 75.1.

The 64GB of eMMC storage is slower than solid-state drives (SSDs) in other machines like the Google Pixelbook and most Windows 10 notebooks. But in real-life use, we never found the Chromebook Flip C434 to suffer any noticeable delays when opening apps and saving files.

The bottom line: Chrome OS doesn’t demand as much from its components as do Windows 10 and MacOS. That means that the Chromebook Flip C434 was plenty fast for all productivity workers and we had little to complain about during our testing. The 8GB of RAM on our review unit also meant that extreme multitasking barely slow things down.

We tried a few Android games on the 2-in-1, and they performed as well as on other Chromebooks we’ve tested. You can certainly game on the notebook, as the limited selection of Android titles we tried out were fast and smooth.

Asus packed in a reasonable 48 watt-hours of battery capacity into the Chromebook Flip C434’s chassis. Along with the low-power CPU and the naturally efficient nature of Chrome OS, we hoped that the 2-in-1 might get us through a working day away from a charge.

That’s exactly as it turned out, although we hit a snag as we began our testing. Usually, we use the Basemark web benchmark to test battery life under load, but the Chromebook Flip C434 wouldn’t complete the test.

So, we stepped to our web browsing test that runs through a series of popular web sites until the battery runs out. Here, the Asus lasted for a very good 10 and a half hours. That’s better than the Acer Chromebook 13’s eight and a half hours, and the HP Chromebook x2’s one hour longer. It’s also competitive with premium Windows 10 laptops like the Dell XPS 13.

Overall, you’re likely to get a solid working day out of the Chromebook Flip C434, as long as most of your work is made up of the usual Chrome OS productivity tasks. Fire up Android games, and you’ll find the battery to burn out much more quickly.

The Chromebook Flip C434 offers a compelling combination of good looks, solid build quality, performance, and battery life . At $570 , it’s quite the deal, too. Asus will be releasing faster versions of the laptop with Core i5 and i7 CPUs later in the year, but they’ll also be more expensive. The Flip C434 might not be our absolute favorite Chromebook, but it won’t do you wrong.

The HP Chromebook x2 remains our favorite Chromebook overall, offering a very attractive tablet with great performance and battery life and a detachable tablet with a very sturdy keyboard base that works well as a clamshell. The $570 configuration offers less RAM and storage, but we still prefer that ultra-portable design to the C434.

You could consider Acer’s Chromebook Spin 13, which sports the same 360-degree functionality as the C434. It’s a bit more expensive than the C434, but offers a solid upgrade with its faster processor and higher-resolution display.

If you need to save some cash, then you could take a look at the Acer Chromebook 15. It’s a larger chassis and it’s not a 2-in-1, but it costs just $400 and offers solid Chrome OS performance, a 15.6-inch Full HD display, and great battery life.

The Chromebook C434 is a very well-built laptop that’s going to take most of what the usual productivity work or student will throw at it. It has a modern CPU and plenty of RAM and storage for Chrome OS. The 1-year warranty is typical and, as usual, disappointing.

Yes. If you want a convertible 2-in-1 Chromebook that gives you some real confidence in hand. It won’t embarrass you at a coffee shop and provides all-day battery and solid performance.

You might also be looking for discounted options. If that’s the case, you can check our recommendations to find the best laptop deals and Chromebook deals.