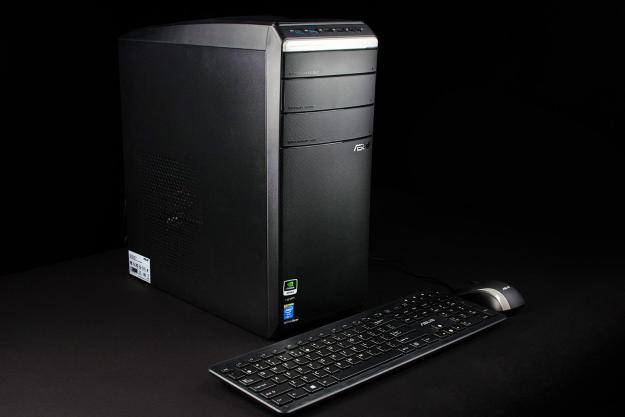 “The Asus M51 isn’t going to bring desktops back into style, but if you’re looking for an old-fashioned tower with great bang-for-your-buck and a solid feature set, this could be the PC for you.”

Asus, the fifth largest PC manufacturer in the world, is known for its cutting-edge mobile PCs. Besides being among the first to jump on the Ultrabook bandwagon, the company also quickly embraced convertibles, offered some of the earliest Android 2-in-1s, and is producing a great line of gaming laptops.

The Asus M51 is perfect for anyone who wants a powerful, yet affordable, desktop PC.

Desktops, however, are another matter. While Asus has always offered some product in the desktop market, they’ve never been best sellers, and the company has never sent us a desktop to review. We were surprised, then, to see the company’s new M51AC-US016S show up at our door.

Available in several configurations, the M51 targets a very wide group of consumers. According to the company’s website, low-end variants will ship with Core i5 processors and Intel HD graphics, while the most powerful versions will boast Nvidia GTX 660 discrete graphics and up to 4TB of storage.

Our review unit, which offers an Intel Core i5-4430 quad-core processor, 8GB of RAM, and a GT 640 graphics card, can be had for $700, which is more than the average price for a desktop but is certainly not expensive. Can this system put Asus’ name into consumer’s minds when shopping for an old-fashioned tower PC, or should the company stick to mobile?

Like many tower desktops, the M51 is essentially a big, black rectangle. The system tapers slightly towards the back, providing a graceful arc and a bit of flair, but it’s no heartbreaker, and it’ll never be noticed if it’s placed beneath a desk.

However, there are some details to help this PC stand out. Most noticeable is a strip of convincing fake-metal plastic along the front edge of the tower, one side of which acts as the button. Below that, Asus added a dimpled texture to front panel’s plastic that adds a little more class than the flat, glossy panels used by many competitors.

While the M51’s form is decent, it hasn’t trumped function. The front top lip provides four USB ports (two 3.0, two 2.0) along with headphone and microphone jacks, and just beyond it is a small plastic drip that can act as a tray for smartphones, USB drives, and other accessories. A top panel below the ports provides access to a multi-card reader, and the system’s rear panel provides eight additional USB ports, six of which are 3.0. Output options include 5.1 audio, SPDIF, HDMI, VGA, and DVI. That’s a lot of connectivity for any desktop, never mind one that sells well below a grand.

A great motherboard wrapped in mediocrity

Unlike most companies in the business of selling desktops, Asus has a large, well-funded hardware division that sells everything from motherboards to video cards.

The internal layout is completely mundane, which is actually good. It means repairing or upgrading the system require no gymnastics.

The M51 takes advantage of this with a quality Asus-brand motherboard that offers several unused SATA connections, a second empty PCIe slot (the first being filled by the GT 640 video card), and three empty RAM slots. While the motherboard is willing, the case is not. The internal layout is completely mundane, which is actually good. It means repairing or upgrading the system require no gymnastics. But a lone empty hard drive bay and limited clearance near the second PCIe slot dampen the upgrade potential.

Users who want to drastically upgrade their system will find they need to switch to another case to fit all the hardware the motherboard can handle, a lengthy procedure many users won’t be comfortable with.

Asus ships the M51 with a wired keyboard and mouse. While Bluetooth would have been a nice touch, it’s not to be expected in a system sold at this price, and the peripherals are actually very nice.

The keyboard is spacious and has good key feel. Though the mouse is only a two-button model with infrared sensor, it’s still very comfortable. Most buyers won’t need to replace either.

Not a hotrod, but adequately quick

While the M51 can be configured with some impressive Core i7 processors, our review unit arrived with the i5-4430, one of Intel’s least expensive and least powerful quad-core desktop parts. The chip still put on a good show, however, reaching a SiSoft Sandra Processor Arithmetic score of 74.3 GOPS and a 7-Zip combined score of 13,730. These figures are about on par with other mid-range desktops, such as the Acer Aspire T3-600.

Though these are some of the lowest figures we’ve recorded from a desktop, they’re still higher than an average all-in-one or laptop PC.

Surprisingly, none of the M51 models we’ve seen listed offer a solid-state drive; it’s all mechanical, all the time. In our case, this means a 1TB, 7200RPM drive that, while certainly quick for its breed, contributed to a middling PCMark 7 score of 3,512. The hard drive’s slow access time (relative to an SSD) can cause a moment of hesitation before a program or file opens.

Graphics power comes courtesy of Nvidia’s GT 640, and while the card is very much an entry-level product, it produced a respectable 3DMark Cloud Gate score of 7,358 and a Fire Strike score of 1,221. The card also proved fast to power Skyrim to an average of 42 FPS at 1080p with medium detail.

Gamers may be disappointed by the need to turn down detail in some titles, but the GT 640 can at least play all games smoothly at 1080p, which is something Intel integrated graphics still can’t claim.

No surprises from cooling

Our decibel meter registered a maximum of 43.9dB from the M51 at load, and that figure was as little as 41.7dB at idle. These numbers are average for the segment and indicate a system that, though audible, isn’t loud enough to annoy most users.

Power consumption figures were low, as the desktop only consumed 43 watts at idle, 80 watts with full processor load, and 93 watts while gaming. Though these are some of the lowest figures we’ve recorded from a desktop, they’re still higher than an average all-in-one or laptop PC.

Besides a wealth of upgrade options, the M51’s Asus motherboard also offers an excellent UEFI BIOS utility. Unlike older BIOS, which only support keyboard input, UEFI supports mouse navigation and provides a graphical user interface. Asus has always had one of the better implementations, which means system settings are relatively easy to understand in change.

There are many other shortcuts on the desktop, but none of the pre-installed software is annoying.

This is not something users will deal with on a daily or even monthly basis, but users will be grateful when it’s needed. Asus also ships the system with AI Suite II, a tool that let users control system settings within Windows.

The software can tweak fan speeds, monitor temperatures, and run diagnostics. While the average owner will probably not bother fiddling with AI Suite, enthusiasts will find it helpful for monitoring the desktop’s health, reducing power draw and lowering fan noise.

There are many other shortcuts on the desktop, but none of the pre-installed software is annoying. A bothersome anti-virus trial is thankfully missing.

Asus covered all of its bases with the M51 desktop. A wonderful motherboard with plenty of upgradability, a wide range of models, and good exterior styling (complete with plenty of ports) makes for a very well-rounded entry that may just be what Asus needs to put itself back on the map in this market. M51 models will be selling from about $600 all way up to $1,000, and slightly beyond, and high-end models will have specifications similar to Acer’s Predator G3 gaming rig. There’s something for everyone.

But is this desktop a good value? Yes, absolutely. Dell’s XPS 8700 offers very similar specifications at the same price, but benchmarks indicate its HD 7570 video card is slightly slower. While the Dell comes with more empty drive bays, it doesn’t have as many internal SATA ports or a second PCIe slot. Acer also offers good value, but the company doesn’t have a system with comparable graphics performance at this price. And HP? Forget about them, at least for now – the company hasn’t transitioned to 4th Generation Core processors, and its mid-range desktops rely on extremely slow GT 625 and GT 630 video cards.

The Asus M51 is perfect for anyone who wants a powerful, yet affordable, desktop PC. It isn’t going to bring desktops back into style, but if you’re looking for an old-fashioned tower with great bang-for-your-buck and a solid feature set, this could be the PC for you.a