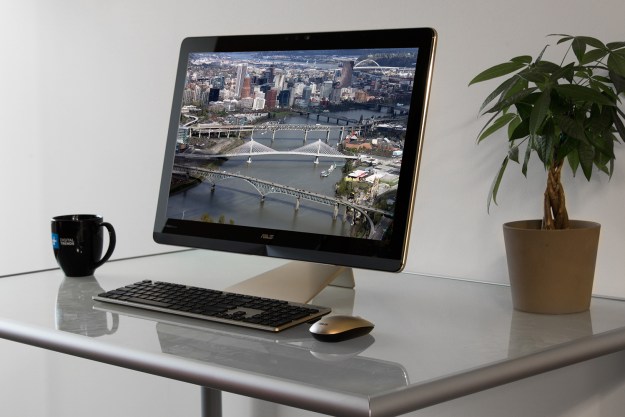 The sleek, slim all-in-one has lured consumers ever since the launch of the first iMac, but Windows users often have trouble finding a system up to Apple’s standard of quality. There are a few that put up a good fight, like Dell’s XPS One and Lenovo’s A-Series. Most, though, are trapped in the same race-to-the-bottom that ensnares desktop towers.

Asus is struggling to break free from that downward spiral with its line of Zen systems, which have enjoyed some success in the Ultrabook arena. Now, the company has brought the same luxury treatment to the all-in-one with its new Zen AiO Pro Z240IC.

The system’s spec sheet is a jaw-dropper. Though its display measures just 23 inches, the Zen AiO Pro manages to pack a Core i7-6700T processor, 16GB of RAM, and a 512GB solid state drive. But wait, there’s more! Asus also somehow crams in an Nvidia GTX 960M, a 4K display, and even Intel’s RealSense camera.

It’s no exaggeration to say no other all-in-one on the market crams so much hardware into so little, but it comes with an appropriately high price tag of $1,900. That’s a lot to spend on an all-in-one, particularly with a relatively small 23-inch display. Does the Zen make you feel at peace despite the hole in your bank account?

The Zen AiO Pro takes obvious design cues from Apple’s iMac. A single piece of metal spans the rear of the system, encasing the hardware in classy brushed metal. The stand is forged from a single hunk of material but, unfortunately, doesn’t offer any adjustments aside from tilt. Around front, the beefy bezels and 4K panel are covered by a single piece of glass, accented by a matte plastic panel along the bottom that houses the built-in speakers.

All of these elements add up to an elegant, but safe, aesthetic. Few will find the Zen ugly, and most will find it quite handsome, but there’s nothing new offered here. That means the compromises are similar to the competition. Like so many all-in-one systems, the Zen’s compact form factor comes at the cost of ergonomic adjustments, and there’s no VESA mount for attaching a third-party monitor standard.

Asus should be commended for packing in a plethora of connectivity, though. The rear I/O panel includes one USB 3.1, four USB 3.0, one USB 2.0, two HDMI-out, separate headphone and microphone jacks, and an Ethernet jack. Wireless connectivity includes 802.11ac Wi-Fi and Bluetooth 4.0. All that’s missing is HDMI-in which, if present, would make the Zen usable as a monitor.

Productivity power, with a catch (or two)

Sitting down to use the Zen as a work machine immediately revealed a few problems, one of which was, surprisingly, the display. It’s very glossy, as is the trend among all-in-ones. The powerful backlight hits almost 400 lux, which overcomes most glare, but reflections are still visible even at maximum brightness if the Zen is used in a sunlit room.

Surprisingly, this small all-in-one is a capable gaming rig.

If the glossy display is a minor annoyance, the Zen’s bundled peripherals are a serious misfire. The included keyboard and mouse connect wirelessly, at least, but they’re constructed of cheap plastic and offer nothing that can’t be had from a typical budget keyboard and mouse bundle. Replacing them won’t be overly expensive, but then again, this is a $1,900 PC – and spending an equivalent amount on Apple’s iMac or Dell’s XPS will net you far nicer accessories.

Those issues aside, the Zen certainly won’t hold you up. Its Core i7-6700T quad-core processor proved extremely quick in GeekBench, delivering a single-core score of 3,364 and a multi-core score of 13,381. The Core i7-6700K, the fastest quad-core currently in Intel’s stable, scored 3,898 and 15,821, respectively. That means the Zen delivers about 80 percent of the performance. Not bad, given its size and other capable hardware.

Speaking of which, the 512GB solid state drive runs at breakneck speed, delivering sequential read speeds of 1,571 megabytes per second, and sequential writes of 1,544MB/s. Those results are in the absolute top-tier of what’s currently available. The only systems we’ve seen with similar performance are top-tier gaming rigs from Origin and Falcon Northwest.

A final, nifty piece of hardware is Intel’s RealSense camera. While a lot of interesting tech demos are available, it’s only practical purpose is Windows Hello, a facial recognition login available in Windows 10. With RealSense, the feature works like magic – just sit down, and you’re instantly logged in. It’s not a must-have, but you’ll have a hard time going back to passwords once you use it.

While the Zen’s performance is held back by a few niggling issues, those problems fall away when it comes time to sit back and relax. The 4K display serves up 185 pixels per inch, which translates to a sharp, crisp image. Color accuracy looks spot-on and contrast is reasonable, though black levels could be deeper. Aside from the iMac, which crams more realism and detail into dark scenes, there are few all-in-ones that compare.

Surprisingly, this small all-in-one is even a capable gaming rig. Base models come with the GTX 950M, but our upgraded review unit is equipped with the extremely competent GTX 960M. Star Wars Battlefront averages about 50 FPS at 1080p and medium detail. Heroes of the Storm, meanwhile, exceeds 75 FPS at 1080p and maximum.

The Zen has an elegant, but safe, aesthetic.

No, the Zen can’t handle most games at its native 4K resolution, nor can it play cutting edge titles at maximum detail and 1080p. But it’s one of the best gaming all-in-ones on the market, and it should satisfy the needs of casual players.

The entertainment experience is helped along by the bundled speakers. They’re loud, offer some bass, and don’t distort terribly when stressed. Like almost every all-in-one they suffer from poor sound staging (it’s hard to produce convincing stereo from a pair of speakers just 12 inches apart), but most owners will see no reason to replace them with external speakers.

Asus’ Zen AiO Pro has a lot of competitors. Its design does little to help it stand out, but the hardware is a different story. There’s no 23-inch all-in-one on the market that offers similar performance, and only the best 27-inch models are in the same league.

Logitech G230 headset ($30)
You’ll need a headset to make the most of the Zen’s gaming chops, and the G230 is a solid, affordable option.

That makes the $1,900 price tag more tolerable. That’s a lot of money, but there’s no alternative that beats the Zen’s processor, hard drive and gaming capability. The closest competitor is probably Dell’s Inspiron 24 7000. Its top-tier configuration is only $1,550, but it’s also less powerful across the board, and the display is just 1080p.

And Asus does offer less expensive models to consider. The best value may be the Signature Edition version sold through Microsoft’s store. It downgrades to from 16GB of memory to 8GB, and trades the 512GB solid state drive for a 1TB hybrid drive, but is otherwise the same. The downgrades slash the price to $1,500.

I’m not sure if there’s a lot of demand for a premium all-in-one with a 23-inch display. But there’s no better choice than the Zen AiO Pro if you demand big performance from a compact system.