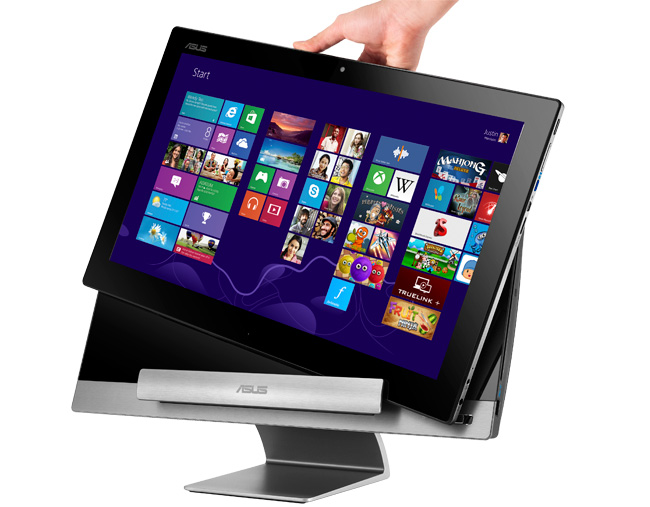 The gigantic tablet-desktops we saw at the Consumer Electronics Show are heading to stores, beginning with the Asus Transformer All-in-One that wowed us in Las Vegas. Asus just announced that the tablet-desktop hybrid will be heading to North America some time between April and June, so it’ll be ready for dorm rooms and back-to-school season.

As we mentioned in our hands-on coverage, the Transformer AiO is basically two computers in one. The 18.4-inch IPS tablet-display is powered by a quad-core Nvidia Tegra 3 processor, while the base of the desktop dock has a built-in third-generation Intel core chip with Nvidia GeForce GT 730M discrete graphics that turns the slate into a serious machine.

When you detach the tablet from its base, the screen becomes a table-sized slate that you can either run Windows 8 or Jelly Bean (Android 4.1). You can either take advantage of its 178-degree wide viewing angle and 10-point multi-touch display by playing Fruit Ninja with friends, or enjoy editing your Excel spreadsheet on an 18.4-inch touchscreen via Asus’ wireless Remote Desktop technology. The slate’s 1920 x 1080 pixel resolution means you won’t be staring at pixelated HD movies but YouTube is another matter. At 0.7-inch thick and 5.3-lbs, the Transformer has about the same heft as a standard laptop but we don’t expect you to travel with this bad boy. Asus claims this Transformer tablet can last 5 hours before it needs to be plugged in, but we’ll have to put it to the test in a more thorough review.

Slide the tablet into the “PC Station” dock and the tablet becomes an all-in-one desktop with a touchscreen. The Transformer AiO comes with a keyboard and mouse along with the computer dock and tablet, so the machine is ready for any way you’d like to use this convertible device. Not only is the base embedded with an Intel processor and discrete graphics, it also offers four USB 3.0 ports and a HDMI-out port, in case you want to set up multiple monitors.

Starting at $1300 for configuration with the third-gen Core i5 CPU, the Transformer AiO from Asus won’t come cheap, but might be worth the costs if you need to flexibility and space efficiencies of a detachable tablet-display running two different OSes.

Topics
CES 2023: Asus’ new 27-inch OLED monitor hits the sweet spot for gamers
Asus’ new ProArt Studiobook has a glasses-free 3D OLED screen
This starter Asus gaming PC and 24-inch monitor bundle is a steal
Best Buy sale: Time is running out to get this Windows laptop for $100
Apple Studio Display just got an unprecedented price cut
The best capture cards for 2023: Xbox, PlayStation, and PC
Hack involved the data of a nation’s entire population
Best Gaming PC Deals: Save on RTX 3070, 3080, 3090 PCs
The 6 biggest problems with ChatGPT right now
Pro users are already unhappy with the upcoming Mac Pro
How to schedule an email in Outlook
15 years later, the MacBook Air could soon have its best year ever
How to watch Super Bowl 2023 on your computer