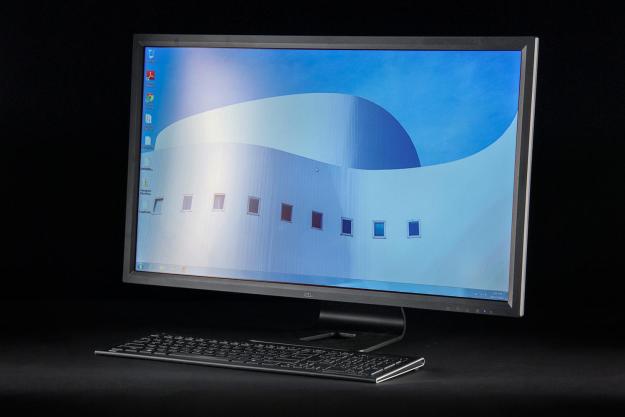 “CTL's X2800 features 4K at a reasonable price, and it has more to offer than high resolution too.”

Dell, Asus, Acer, HP, and Samsung are the brands most people turn to when looking for a new display. However, there are a lot of choices outside of these major companies. A number of small businesses offer monitors too, and one such company is CTL.

Headquartered in Portland, Oregon, the firm has a fraction of the money and staff that today’s technology giants do, but you wouldn’t know that from its flagship X2800 display. This 28-inch 4K monitor has all the features an enthusiast would expect, including a 60Hz refresh rate, and five video inputs.

What’s truly exceptional though, is the price. CTL sells the X2800 for just $550, which is barely more than the going rate for competitors with 1440p panels. Is the price too good to be true, or has a small U.S. business managed to build a world-class monitor?

We were surprised by the X2800’s heft as we lifted it out of its packaging. The price admittedly left us with some feelings of bias. Surely, we thought, a 4K monitor with a price this low would feel cheaper than a Dollar Store action figure. However, that couldn’t be further from the truth.

The monitor is propped up by a metal stand that’s so solid, it feels like it could be used as a weapon.

The X2800 isn’t particularly attractive, but it’s absolutely well built. Every panel, including the inch-thick bezel, feels like it is designed to last.

The monitor is propped up by a metal stand that’s so solid, it feels like it could be used as a weapon. On the downside though, the stand only allows you to perform tilt adjustments. A VESA mount is available to fix this problem, and CTL sells its own height-adjustable stand for $35. This is one area where the X2800’s cost-cutting approach is apparent.

The same can’t be said for port selection, as the monitor provides VGA, DVI-D, two HDMI ports, and a pair of DisplayPort connections. Most competitors only offer one DisplayPort, and sometimes HDMI 2.0 (these are the only standards that can drive a 4K display at 60Hz). It’s nice to see VGA and DVI as an option for buyers who might use the monitor alongside older devices that lack modern video connections. Two USB 3.0 ports on the left flank provide some additional connection options for thumb drives, and other media.

While the X2800 hides its budget roots well, the facade starts to fall when the on-screen controls are used. They’re accessed through a set of touch sensitive buttons located along the lower right hand corner of the display. As with most touch controls, they lack the tactile feel that’s necessary to help users detect when a button activates. The result is a jerky stop-start-stop experience that will leave you guessing as to whether the adjustments you want to make have actually occurred.

There’s not much to control, either. Aside from brightness and contrast, there’s only a couple of pre-set color modes, one of which is a user-defined mode that allows you to adjust red, blue, and green. Gamma, sharpness, and detailed color controls aren’t available. While we had no trouble calibrating the display to satisfy our preferences, the lack of significant gamma and color adjustments may irk those who like tailoring image quality to their specific tastes.

The only other feature of note here is picture-in-picture mode, which lets users see input from multiple sources simultaneously. This isn’t the kind of thing most consumers need, but it’s sure to be useful for those who do. The fact that it is accessed through the on-screen controls can make turning it on and off frustrating.

The low price of this monitor goes a long way towards excusing the terrible controls, but we can’t entirely forget our frustrations. Making a simple adjustment, such as lowering brightness, can require half a minute of fumbling as the dull buttons ignore your inputs.

After setting up the CTL X2800, we dove into a session of Diablo 3. We instantly noticed that the monitor offers strong contrast in addition to the razor-sharp look we expect from a 4K monitor. Characters are displayed with significant depth, and we saw good shadow detail in the game’s darker areas as well.

We then opened up several 4K test videos and images. These too had excellent contrast, but we noticed that the CTL’s greens and blues appeared flat at times. This was most noticeable when viewing video depicting vegetation alongside blue skies.

This 28-inch 4K monitor has all the features an enthusiast would expect.

Still, we were very satisfied with image quality overall. In this area, it matches (and perhaps exceeds) the more expensive Acer XB280HK. Like that monitor, however, the X2800 uses a TN-panel that suffers from limited viewing angles. The lack of a height-adjustable stand can make the perfect viewing angle difficult to find.

Our testing equipment backed up our impressions. It detected a gamut that spans 97 percent of sRGB, and 73 percent of AdobeRGB. Contrast also came in strong at a ratio of 530:1. The gamma curve was 2.1, which is only slightly off the target of 2.2, and the average color difference was 2.45 (anything less than one is generally unnoticeable). Cyan proved to be the most troublesome color, as usual, with its difference of 5.57. All other colors came in at 2.5, or less.

These results are on par with the Acer XB280HK. That monitor had a slightly better contrast ratio of 630:1, but it was bolstered by an outlandishly high (some might say unusable) default brightness of 306 lux. Measured contrast was identical to the CTL when we turned the backlight down to a more usable setting. The Acer renders a slightly narrower gamut, but what it did render was slightly more accurate.

To calibrate the CTL X2800, we turned the brightness down to 120 lux, which is a better output for use in a dark room. We then adjusted settings using Datacolor’s Spyder4Elite until we received the best results possible. In the end, we reached an average color difference of just 1.10. Remember that anything below one is generally unnoticeable, making this an excellent result. Cyan was the only color with a difference above four. The gamut stayed about the same, though AdobeRGB coverage widened from 73 percent to 74 percent. Gamma remained stubborn as well, and we could not hit the ideal 2.2 standard.

Still, these results are among the best we’ve seen from any monitor. Acer’s more expensive XB280HK calibrated to an average color difference of 1.55 with a perfect gamma curve, but a slightly narrower color gamut. The only monitors we’ve reviewed with better color accuracy are the Acer K272HUL, the Samsung Series 7, and the Samsung Series 9, all of which scored just a little better.

We went back to our gaming, video, and image tests to see if we could notice the difference. The improvement in color was hard to pick up in video content, but a bit easier to see in images. In the latter, greens and blues look more balanced. In Diablo 3, the improvement in color took a back seat to an improvement in black levels. Lowering the display’s brightness helps blacks achieve an inky tone that’s rare among LCD displays.

CTL’s X2800 makes a strong case for itself in the budget 4K monitor market. The $550 price isn’t low enough to qualify as generally affordable, but it’s a great value compared to the rest of the competition. More importantly, this monitor provides image quality that’s on par with what you’ll get from many 1080p, and 1440p monitors that sell for around the same price.

Dell’s UltraSharp U2713HM, for example, usually goes for around $550 to $600. It has better image quality overall, but the gap is so narrow that most consumers wouldn’t notice it without a side-by-side comparison. The ASUS PB278Q is only $60 less than the X2800 as of this writing, and Samsung’s S27A850D is about the same price as the X2800.

Some concessions are made to help CTL offer so much for so little. The on-screen controls are frustrating to use, calibration options are limited, and the stand only offers tilt adjustment. These are minor problems though, and CTL makes up for them with exceptional connectivity. If you’ve been waiting for a great value before making the jump to 4K, wait no longer. Your monitor has arrived.

Topics
The best capture cards for 2023: Xbox, PlayStation, and PC
Best Monitor Deals: Save on Gaming Monitors, Ultrawide
HP Envy x360 13 vs. Dell XPS 13: the best tiny laptop?
The best external hard drives for 2023
GPU prices and availability (February 2023): how much are GPUs today?
The best PC power supply for 2023
ChatGPT has a new way to detect its own plagiarism
Samsung Galaxy Book 3 Ultra vs. MacBook Pro 16-inch
The Galaxy Book 3 Ultra is Samsung’s most powerful laptop ever
Nvidia may have another monster GPU in the works, and the price could be outrageous
AMD’s Ryzen 9 7950X3D pricing keeps the pressure on Intel
What is ChatGPT Plus? Everything we know about the premium tier
ChatGPT Plus to bring priority access during peak times — at a hefty price