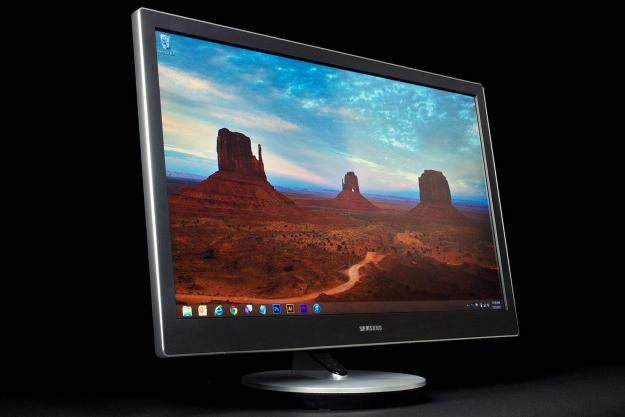 When it comes to image quality, there are two kinds of consumers: those who care, and those who don’t. Most buyers fall into the second group, and while it’s easy to sneer at users who nitpick gamma and gamut, their motives are understandable. Sacrifice image quality, and very big displays can be found at a very low price.

For those who do care, however, such a trade-off just won’t fly. These “prosumers” are willing to part with a huge chunk of cash if a monitor lives up to their exacting standards. This is exactly the demographic targeted by Samsung with the Series 9 monitor, a 27-inch, 2560 x 1440 tour-de-force that sells for $1,200.

There are two key features that set this display apart from the common rabble. First is the Plane Line Switching (PLS) panel. A variant of the IPS-LCD technology common in smartphones, high-end laptops, and some HDTVs, PLS promises an even better viewing angle and improved color accuracy. Second, the Series 9 monitor comes calibrated straight from the factory, which means it should provide better out-of-the-box quality than, well, almost every other monitor sold.

While all of this sounds nice, execution absolutely matters. At over a grand, this Samsung goes up against the best products from Apple, Dell, HP, Viewsonic, and NEC – all veterans of the high-end monitor market. Can the Series 9 really go toe-to-toe with such determined competitors?

While high-end monitors are known for many perks, design is not among them. Only Apple has traditionally paid any attention to how a professional-grade display looks when turned off, but Samsung’s no stranger to design. The Series 9 monitor borrows the brushed-aluminum, chrome-trim style used on most of the company’s smartphones and laptops to create a look of functional elegance. Unfortunately, as with many of Samsung’s products, most of what looks like aluminum is actually textured plastic.

The chrome stand, however, is real metal, and it keeps the large monitor stable. As we’d expect from display of this caliber, stand wobble is an absolute non-issue, and the monitor’s position can be adjusted for both height and tilt. There’s no swivel or rotate functions, however, which is a feature found on some competitors (particularly the Dell Ultrasharp series) sold at a much lower price.

At first glance, the circular base appears to be lacking ports, but a close look at the bottom reveals HDMI, DVI, and DisplayPort nestled alongside USB-in and the power jack. All of these ports are a bit difficult to access, but not more than any other monitor. Two additional USB ports inhabit the right side of the stand and can be used to connect USB drives.

The Series 9’s OSD controls are accessed through touch-sensitive buttons on the display’s base. They’re backlit, which makes them easy to locate, but the always-lit power button can be distracting when the monitor is used in a dark room.

Users will find plenty of adjustments available including not just the usual brightness, contrast, and sharpness, but also color, gamma, and color temp – the last of which can be set to one of thirteen settings in 500k temperature increments from 4000k to 10000k. These controls allow for significant customization, either to better calibrate the display or to adjust picture quality to fit personal tastes.

Though this monitor comes calibrated from the factory, Samsung took the unusual step of shipping it with calibration software. The tool, called Natural Color Expert, is really more of a confirmation tool that helps the user see evidence of the factory’s accuracy. As we’ll discuss in a moment, there’s surprisingly little room for improvement out of the box.

Otherwise, the Samsung comes with DVI, DisplayPort, and HDMI cables, and a CD, which contains the user manual. Though we’d expect cables to come with a product this expensive, not all high-end monitors ship with them. We’re happy to see Samsung spend a few extra bucks to include them.

Samsung ships the Series 9 alongside a calibration report to prove the factory has done its job. We’d never take such a thing at face value, however, so we hooked up our Spyder4Elite calibration tool and ran our typical test suite. The results are impressive.

In “standard” preset, the display managed to render 100 percent of sRGB, 76 percent of AdobeRGB, and achieved an average color error of 1.08 delta-E. To put that into perspective, experts consider a differentiation of 1 delta-E to be the lowest the human eye can notice; anything below appears accurate. While the Samsung Series 9 showed a delta-E of almost 4 when rendering Cyan, all other results were well below 2, and two out of three primary colors were below a delta-E of 1.

We do have some bad news, however. Our test equipment registered a black level of 0.18 at minimum brightness, which increased to 0.61 at maximum. These readings are just average, and they no doubt contributed to the display’s moderate contrast ratio of 430:1. We also noticed a uniformity difference of up to 10 percent along the top of the display, which is just okay for a display in this price range.

In most situations, calibration of a display will result in a significant improvement. The settings from the factory are meant to suit a wide range of uses, and companies assume real pros will calibrate to fit their specific needs. Samsung is one of the few to do factory calibration, however, and we saw very little improvement in our post-calibration results as a result.

The color gamut remained at 100 percent sRGB and increased to 78 percent of Adobe RGB, which is a small gain. More significant gains were made in color accuracy, where we managed to lower average delta-E to 0.95. That’s a very good result, but not exceptional compared to other high-end monitors. Notably, we saw little improvement in the accuracy of blue and cyan, and the accuracy of black actually took a step backwards.

Black levels were almost identical after calibration, though the reading at 100 percent brightness increased a tad from 0.61 to 0.62, and overall contrast dropped to 410:1. Uniformity improved slightly, with the maximum difference dropping from 10 percent to 8.7 percent, again along the top of the display.

Overall, we don’t think we can make the claim that our after-calibration results improved image quality. Some readings were a bit better, but others a bit worse. This is a credit to the effectiveness of the factory calibration, but also a disappointment, as the pre-calibrated Samsung Series 9 failed to provide inky blacks and didn’t have the best accuracy when rendering Cyan or Blue.

The highly accurate color this monitor provides is noticeable almost immediately. Even photos posted on Facebook will, if taken by a quality camera, show rare vibrancy. When viewing photos of a boutique of flowers, for example, the image on the Samsung Series 9 was noticeably better than that of an entry-level Dell UltraSharp U2412M we had on hand (another very good monitor), and it’s a huge leap over the other all-in-ones and laptops we had for comparison.

So-so black levels are a particular sore point and contribute to a less-than-stellar experience while viewing certain games and media content.

We also appreciated the matte coating, a feature that separates this model, the S27B971D, from its sibling, the glossy S27B970D. Glare can wash out the panel if intense, direct light is applied, but most glossy screens will be unusable under similar conditions. There’s also plenty of brightness on tap to overcome ambient lighting, and in our sunlit office we were happy with the display at 60 percent of its maximum.

The viewing angle is nothing short of amazing. While all IPS monitors are known for superior off-angle quality, the PLS panel in this display goes beyond all expectations. Very little shift in color is visible no matter the direction the panel is viewed. There is some shift to gray when viewing an all-black screen off-angle, but this problem is shared by all LED backlit displays.

Ghosting tests showed that Series 9 does a reasonable job of handling motion. This is a 60Hz monitor, so some blurring is inevitable, but the issue is rarely apparent in normal use. Even then, not everyone will be bothered.

However, these benefits are somewhat spoiled by the display’s lackluster black level performance. Put simply, blacks never render as pure black, but instead rest at a bright shade of gray. To be fair, the black levels are not terrible, and we’ve on occasion seen displays that are literally three or four times worse. But we were expecting more for the money.

The Samsung Series 9 is a display that feels wedged between two different categories. On the one hand, this stylish display looks and feels at first glance like a high-end consumer product; but on the other hand, the display is calibrated with excellent color accuracy from the factory, and is priced to compete with top-tier professional monitors. Samsung seems to be targeting a user who cares deeply about color accuracy yet doesn’t play games or watch movies and also doesn’t care to mess with calibration at home. We’re not sure many buyers fit that niche.

More importantly, this monitor doesn’t impress when placed next to competitors like the Dell Ultrasharp U2711 and Asus PB278Q. The problem is not that this monitor is bad, but rather that it’s not good enough to justify its premium over competitors, a great many of which are sold for a bit below $1,000. So-so black levels are a particular sore point and contribute to a less-than-stellar experience while viewing certain games and media content.

If you just want accurate color, and you want it without going through the effort and expense of calibration, then the Samsung Series 9 might be for you. But we also think that the “average” user looking for an exceptional all-purpose monitor will be better served by less expensive competitors.