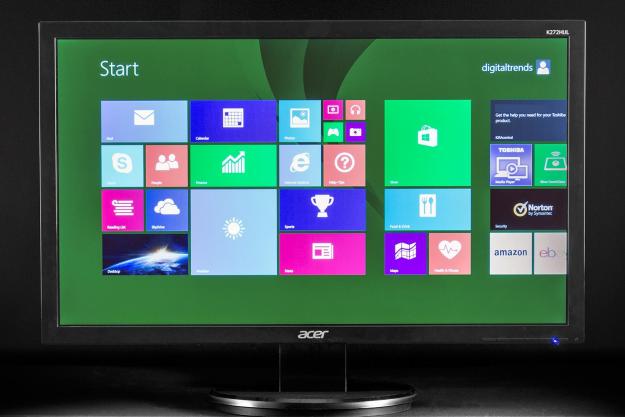 4K is the big buzzword in the monitor business these days, but its debut means more than the addition of yet another resolution for buyers to think about when weighing their options. Going 4K also forces panels that were once the king of the hill down-market. Two years ago, 2560×1440 (or 2560×1600) was the ultimate in desktop monitor resolution, but now, it’s merely good.

This has resulted in lower prices for some formerly expensive monitors. Dell now sells its entry-level 27 inch Ultrasharp for as little as $650, while Asus and Samsung offer WQHD 27-inchers for $550. Acer, meanwhile, has entered the fray with its K272HUL, which sells for a mere $450.

That’s not much for a display with over 3.6 million pixels; in fact, this is the least expensive WQHD monitor on Newegg that’s sold by a major name brand (some off-brand monitors are less). So does this make the K272HUL a value leader, or has cutting the price resulted in a big compromise in quality?

The Acer K272HUL is built to fit a budget, not to make a design statement, and that’s evident in the monitor’s construction. Plastic is the material of choice throughout most of the display, and while it serves its purpose, no one will mistake this for a luxurious, super-premium screen. The monitor is several inches thick at most, yet the glossy black bezel flexes significantly when touched, as if the monitor’s held together with nothing but a few dots of super-glue.

The Acer K272HUL is one of the best budget monitors we’ve reviewed.

Buyers looking for a highly adjustable stand will need to look elsewhere. The stand holds the monitor firmly in place and provides a wide, stable base, but tilt is the only adjustment permitted here. There’s no way to change height, swivel or orientation. A VESA mount is included, however, so you can mount the K272HUL to an aftermarket stand.

Connectivity, on the other hand, is robust. There’s two HDMI, DisplayPort, and DVI alongside an audio jack for the monitor’s built-in speakers. All ports face downwards, however, which can make connecting cables a chore.

Physical buttons found on the lower right portion of the display can be used to make adjustments to the image. There’s not much to change though, as the controls only let users alter brightness, contrast and color temperature (which offers warm, cool and sRGB presets). There are no controls available to adjust sharpness, black levels, response times or precise color temperature. With that said, it’s rare for a budget monitor to offer advanced controls, and the Acer delivers no less than we’d expect.

Navigating these settings can be a chore. Acer’s menu uses many icons, yet the purpose of each icon isn’t always obvious, which means there’s some trial-and-error required to understand what each button does. We eventually became proficient at navigating the monitor, but it took longer than it does with most.

The only bonus feature worth noting is the display’s picture-in-picture feature, which lets the user display content from a second input in a small on-screen window. You can set the window up in one of four quadrants, or you can split-screen your display down the middle. However, the PiP content area is of course rather small, which limits its use. Acer’s claim that PiP can replace multi-monitor situations seems dubious.

Is this thing on?

The speakers in the K272HUL serve little purpose other than to add another checkmark to the features list. Most smartphones are louder, and by a substantial margin! You’d have to be desperate to rely on this monitor’s built-in speakers for your audio.

Like most consumer monitors, the Acer K272HUL is calibrated out-of-the-box for flash rather than precision. The backlight, which defaults to maximum, generates an impressive 347 lux according to our meter. Throw in a semi-gloss panel and you’ve got the recipe for a monitor that’s usable in virtually any lighting condition.

Our calibration tools found color gamut to be a weak point though, as the un-calibrated display rendered only 90 percent of sRGB and 67 percent of AdobeRGB. Black levels proved average at best and contrast ratio came to a modest 630:1. Overall, these gamut figures are the worst we’ve seen from a large monitor in the past year. LG’s LN450W managed 81 percent of AdobeRGB without calibration, while the Samsung S24C770T rendered 75 percent, and the Dell P2714T rendered 73 percent.

Acer has managed to exceed our performance expectations without introducing any flaws.

Color accuracy came to an average error of 1.92 DeltaE. As is almost always the case with modern LED-backlit monitors, cyan was the furthest off at 5.47 DeltaE, but yellow was also significantly off at 3.42 DeltaE. A DeltaE of 1 is considered the minimum noticeable by human eyes, so the significant errors this monitor generated when asked to produce cyan and yellow aren’t hard to detect with the naked eye. Still, these results are better than the LG LN450W’s average DeltaE of 2.58, and about on par with other mid-range large monitors we’ve reviewed.

Gamma is a strong point though, as the monitor came right out of the box with a perfect 2.2 Gamma curve, which means that the K272HUL renders images with appropriate levels of brightness. The white point of 6800K was also pretty close to our target of 6500K.

Subjectively, we found the Acer’s quality pleasing enough, though inaccurate rendering of cyan meant images suffered from a cold, sterile look. The contrast ratio is sufficient enough to make movies and games look good, if not great, and accurate gamma ensured that details in dark scenes were properly rendered. While what’s offered here is no match for a high-end monitor, the K272HUL holds up well when compared with the LG LN450W and Dell P2714T.

Calibrating this monitor proved difficult. Our greatest frustration was sRGB mode, which only works at 80 percent of maximum brightness. This is simply too bright for viewing in a dark room, and it did not result in the best color accuracy.

We instead achieved our best results by dimming the backlight to 20 percent of maximum and using the Warm color temperature pre-set. This expanded the gamut to 100 percent of sRGB and 81 percent of AdobeRGB. Average color accuracy, meanwhile, improved to a DeltaE of 1.07. Cyan was still the worst with a DeltaE of 3.92, but all other colors boasted a DeltaE below 1, which is great for a $450 monitor of this size.

Yet, doing this knocked Gamma off the target of 2.2, which it achieved out of the box, to 2.1. Brightness decreased to 124 lux and took contrast down with it, narrowing the ratio to 540:1. And white point barely budged, improving just a smidge to 6700K. In a dark room, the end result was a superior picture, but the backlight was no longer bright enough to make for comfortable use in a sunlit area.

We never found a perfect compromise. Increasing the backlight set gamma back to 2.2 and improved overall contrast, but inevitably hurt color accuracy, resulting in a less realistic image. Still, it must be said that the Acer performed admirably considering its price, as its calibrated color accuracy and gamma beat the LG LN450W, the Dell 2714T, and came shockingly close to the much more expensive Samsung S27C750.

The Acer K272HUL is the least expensive name-brand WQHD 27 inch monitor on the market, so it comes as little surprise that its performance is not ground-breaking. You’ll receive greater color accuracy and superior contrast from something like the Dell U2713HM or even the ASUS PB278Q, which is only $100 more.

Still, this Acer is far from a bust. The display’s overall quality, while far from the best, is likely “good enough” for most owners. We watched quite a few YouTube trailers and, while we were never astounded by what we saw, we were never disappointed, either. And in some areas, like gamma and calibrated color accuracy, this monitor can compete with alternatives that sell for hundreds more.

We could certainly criticize the K272HUL for its poor build quality, lack of adjustable stand and confusing controls, but what’s the point? This is a cheap monitor, and what we expect from a cheap monitor is simple; decent image quality, low price, and no show-stopping faults. Acer has managed to exceed our performance expectations without introducing any flaws, and that makes the K272HUL a good choice for budget buyers.