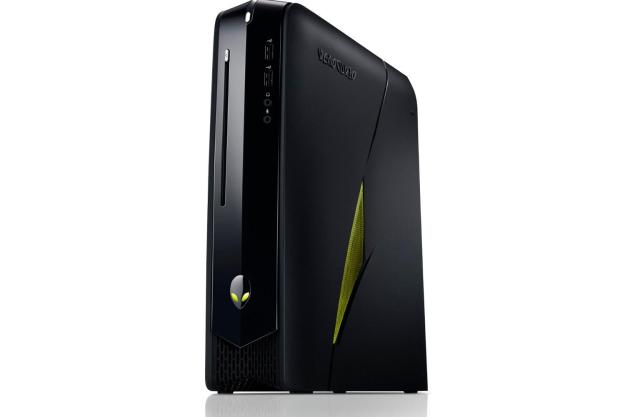 “Beautifully engineered, the Alienware X51 is a quick, small, and surprisingly affordable gaming PC. No competitor can match its killer combo of pint-sized chassis and powerful performance.”

The PC gaming console has long been a dream of both hardware manufacturers and gamers. Consoles offer a living-room gameplay experience, while computers provide incredible performance, a wider selection of games, and upgradability. Meshing the two together would lead to perfection, right?

Of course, the solution is not that simple. After all, computer components aren’t designed to fit in small cases. Alienware is arguably the only company to successfully tackle this problem with its first X51, which we reviewed in April of 2012. The previous-gen system only boasted a GTX 555 graphics processor and a Core i5-2320 quad-core, but it proved capable of handling modern games. An as-tested price of $950 didn’t hurt, either.

Now, we’re taking a second look at the X51, refreshed with 4th-gen Intel Haswell processors. Our review unit shipped with a Core i7-4770 processor, 16GB of RAM, and an Nvidia GTX 670 graphics card. Haswell should improve performance, but is it enough to keep up with a pack of new and refreshed competitors?

Alienware, owned by Dell, has both the money and the connections necessary to craft unique and innovative designs. The result is a gaming PC that’s only 13 inches tall and about three inches wide. In other words, it’s about the size of a game console.

Like a game console, the X51 can be used either in a horizontal or vertical position. Dell designed the slot-loading optical drive and front ports, which include two USB 3.0 and headphone/microphone, so that they’re accessible in either position. The X51 gives you the option to position the PC in a home theater, or go old school and set it sideways on a desk with the monitor on top.

Aesthetically, the system manages a distinct look without overdoing flash. Alienware’s typical design cues, including strange alien text and a LED-lit side vent, are present, but they’re small and dim compared to the company’s other models. This is a blessing since bright LEDs are distracting in a home theater environment.

The system’s rear port panel offers six more USB (four 3.0, two 2.0), and four video inputs, which include dual DVI, HDMI, and DisplayPort. Another HDMI port is found on the motherboard, but is not functional with discrete graphics, and Internet connectivity can come through Ethernet or an internal Wi-Fi antenna.

The X51 is almost impossible to open without instruction. Fortunately, instruction is available; Alienware posted a handy disassembly video online. You can remove the side panel and video card within minutes when following these steps. Other videos describe how to remove the hard drive and wireless card.

Though its custom chassis is unusual, we were pleasantly surprised to find it a pleasure to work with. There are few screws to disassemble because many components are held in place partially by clips or by contact with other portions of the enclosure. Replacing the RAM, video card, or hard drive is no more difficult than it would be in a larger PC.

Upgradability remains an issue, however, as there’s no excess space or empty bays. Instead of normal 3.5-inch hard drives, the X51 uses those designed for laptops, and the video card tray in our review unit can’t accommodate anything larger than the GTX 670. Even the RAM is wedged tightly between the processor fan and the optical drive. Finding parts that fit could be a trial, and the external power supply puts a cap on the wattage components can draw.

Nothing small about performance

Our review unit’s Core i7-4770 is almost identical to that in the Falcon Northwest Fragbox we recently reviewed, but it’s missing an important letter at the end: “K.” That means the X51’s processor can’t be overclocked, which leads to a SiSoft Sandra Processor Arithmetic score of 124.6 and a 7-Zip score of 22,572. Both figures are about 15 percent behind the pace set by the Fragbox. That being said, they’re still quite good, and certainly more than adequate for games.

The general performance test, PCMark, returned a score of 5,934. This practically ties with the Digital Storm Bolt, and is well ahead of the Acer Predator, but it’s also far behind many high-end gaming desktops including the Falcon Northwest Fragbox, which broke records by scoring 7,107.

In-game performance proved more than adequate. At 1080p and maximum detail, our X51 review unit easily delivered Skyrim’s 60FPS cap at Ultra detail and pumped out over 100 FPS in Borderlands 2 at maximum detail.

The X51 alarmed us during its first boot by spinning its fans at maximum for several brief seconds before winding down to its idle pace, which ended up being a warning of things to come. Our decibel meter found the system emits up to 49.3dB at full load, which is just behind the 50.1dB reading we recorded from the punishingly loud Digital Storm Bolt.

The sound a PC makes is not a minor issue. A system like the X51 is designed to exist in a living room, yet, because of the noise, some users may find it an annoyance rather than a pleasure. For comparison, the original Xbox 360 (which was widely criticized for its volume) falls between 48dB and 52dB when playing a game, so this computer is in the same territory. Current consoles, including the new “slim” 360 and the PlayStation 3, emit far less noise.

On a positive note, our wattage meter revealed that the system, which uses an external power supply similar to the Xbox 360, won’t run up your power bill. At idle, our meter reported consumption of 44 watts, while full gaming load bumped use to 216 watts. That’s a lot relative to a standard desktop, but it’s green by gaming standards. Falcon’s Fragbox, for example, requires 330 watts at full load.

A bundle of adequacy

Alienware ships this system with a keyboard and mouse, an unusual move for a boutique gaming manufacturer. Both devices are okay – particularly the keyboard, which is on par with the $40 media keyboards sold by Logitech and Microsoft.

With that said, we think shipping peripherals with a gaming PC is the wrong choice. Both the mouse and keyboard are far behind the quality of even an entry-level mechanical gaming keyboard or 5-button gaming mouse, and hardcore gamers will end up buying both (or already have them).

Don’t call it a Steambox

The X51 is not officially a Steambox, but it can fill that role. A basic $600 version that ships with Ubuntu (instead of Windows 7) is available, and Alienware’s reps were sure to remind us that their system is best when connected to a TV and used with Steam’s Big Picture Mode. Steam does not come installed, however, nor is there any official documentation or pre-bundled shortcut directing users towards the service.

Actually, there’s not much pre-bundled anything, except for Alienware software to control the LED lights and a few basic utilities, such as a backup service and a power management tool. Our review unit also arrived with Windows 7, which is the standard OS, but Windows 8 is available as a no-charge option.

The X51 is a beautifully engineered computer that can’t entirely overcome the fundamental challenges all small gaming PCs face. Yes, it’s easy to disassemble; but upgrading is a chore. Yes, it packs incredible hardware in a small profile; but it’s still loud. Yes, it can be used with Steam’s Big Picture Mode; but most PC games still lack controller support.

All of these problems are notable, but the system has a savior: price. Our review unit ships for $1,820, which is about $800 less than the Fragbox. Stop and think about that for a second. This is a fully capable gaming computer the size of an Xbox 360 that can run any game at High detail (and most at Ultra) while maintaining well over 60 FPS, yet it’s one of the least expensive gaming desktops we’ve recently tested. And you don’t even have to spend that much. Our review unit has all the options, but many are overkill, and pricing starts at just $700.

The value of the X51 helps to redeem its flaws since no competitor can match the X51’s killer combo of pint-sized chassis and powerful performance. Falcon Northwest’s Tiki is awesome, but it’s also much more expensive. Cube systems like the Falcon Northwest Fragbox and Maingear X-Cube can be had for a similar price, but they’re larger and more difficult to place in a home theater. Only Digital Storm’s Bolt is of similar size, but that system suffers the same problems as the Alienware while offering none of its benefits.

We’re still waiting to see the perfect combination of PC hardware with console form factor, and we expect we’ll have to wait for some time. Until then, the X51 is the only credible choice among PC-console hybrids.

Best laptop deals: Save on Apple, Dell, HP and Lenovo
Best Chromebook deals: Get a new laptop from $99
This stunning DIY gaming PC dream machine is made of glass
The best laptops you can buy in 2022
Apple’s VR headset may launch soon, intriguing leak suggests
The most innovative monitors of 2022
The most innovative tech products of 2022
Why I refuse to buy The Callisto Protocol on PC, even with an RTX 4090
Nvidia and AMD GPU prices could skyrocket again in 2023. Here’s why
How to safely overclock your Intel or AMD CPU
ChatGPT: how to use this viral, often hilarious AI chatbot
What does the lock mean on Snapchat?
I replaced my MacBook with a Quest Pro for a full work week. Here’s what happened