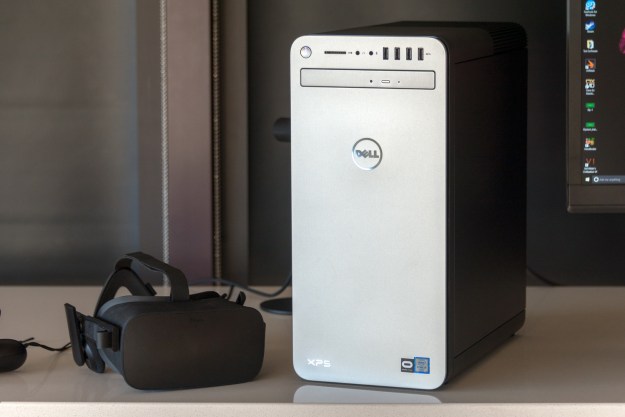 Despite what it may seem from our reviews, not everyone is buying tricked-out gaming PCs. That sort of power is overkill for most people, and often, gaming desktops are just medium-sized towers with a Core i5 and a mid-range graphics card.

Desktops not unlike Dell’s redesigned XPS Tower SE. In our case, it’s the XPS 8910 SE — Special Edition — which is configured separately from the standard edition. Our review unit is the basic model, with a Core i5 and a 1TB HDD, with a bump to the GTX 1070 instead of the RX 480.

Those are decidedly mid-range components, and they carry a correspondingly mid-range $1,200 price tag. How does it compare to more affordable gaming PCs? Can this budget Dell keep up with the competition?

The Dell’s short stature and mundane appearance betray the powerful internals packed inside. In fact, it would be hard to describe the Dell as anything but boring — it would fit in alongside any other office computer without raising an eyebrow.

That’s a dual-edged sword. The Dell’s inconspicuous look will be exactly what a lot of users want. No fancy lights, no big windows, or flashy exterior. At the same time, it doesn’t have the same construction quality we often see on some dedicated gaming desktops. The plastic is a little on the flimsy side, and the fins over the fans bend if you put your hand on them. Panels don’t line up perfectly either, particularly where the doors come off.

On the upshot, the system is quite small. Even mid-sized gaming rigs tower over this Dell. If you need something that fits on a small desk, or next to your TV, the Dell’s slight stature gives it an edge over beefier machines.

Around back you’ll find a selection of useful ports. There are two USB 2.0 ports for keyboard and mouse, four USB 3.0 ports, and a single USB-C connection. Ethernet makes an appearance as well, and there are HDMI and DisplayPort connection for the internal graphics.

Every XPS Tower SE SE is “VR ready,” so the most basic option available has an 8GB RX 480, while our review unit is packing a GTX 1070. Depending on which card you go with, your video connection options will vary, but should include at least one DisplayPort and one HDMI each. That means you can hook up a VR headset and an external display at once.

As you might expect given its size, the XPS Tower SE’s internals are cramped. Accessing the motherboard is a tool-free process, but one that’s a bit unconventional. Opening the side panel reveals the internal frame and power supply, which is located high inside the case. Pop two latches on the back, and the whole frame, with power supply, swings outward on a stiff hinge.

Most gaming desktops tower over the scaled-down Dell.

Once that’s out of the way, you have access to the rest of the components. Let’s start at the bottom. Two 3.5 or 2.5-inch drive bays take up the lowest point in the case, not uncommon for cases of any size. A plastic bracket sitting on top holds up the GPU, a full-sized reference GTX 1070 in our case. Above that, there’s easy access to the memory and CPU.

All in all, that’s solid accessibility for a system so compact. As desktop sizes shrink, reaching the RAM or throwing in an extra drive can become a chore. If we have one gripe, it’s cable management. There were several loose cable ends hanging awkwardly, and a serious shortage of zip-ties. As a result, you may have to tuck some wires back into place before you swing the hinged panel closed again, or risk ripping into them.

Our review unit was powered by a Core i5-6400, a quad-core chip with a 2.7GHz base clock and 3.30GHz Turbo Boost, paired up with 8GB of DDR4 RAM. That’s the basic CPU, with options for the Core i7-6700 or Core i7-6700K. The latter is an expensive jump, and considering the size of the CPU cooler and tight spaces inside, it wouldn’t be wise to bank on overclocking it.

While the newer XPS Tower SE SE beats out the older model, it falls behind other compact gaming machines. That’s partially thanks to its Core i5 chip, which lacks the Hyper-Threading of the Core i7-6700 and Core i7-6700K found in the Acer Predator G1 and Lenovo IdeaCentre Y900, respectively.

However, the XPS Tower SE SE costs a fair bit less than either of those systems, and its performance isn’t disappointingly low for what you’re paying. It’s a few minutes slower in real-world tests like our Handbrake 4K video conversion, but provides enough power that it won’t feel sluggish — or at least, if it does, it will be because of the hard drive.

Despite its solid CPU performance, the Dell has a dark secret hiding under the hood — our review unit arrived with a 1TB mechanical hard drive. We’re used to seeing SSDs in basically every computer, and the absence here is notable.

Ouch. Systems with even a halfway-decent SSD, such as the Lenovo Y900 and Acer Predator G1, boast read speeds three to five times faster than the mechanical disk in the XPS Tower SE. Write speeds tend to vary more based on manufacturer and drive capabilities, which is why the Y900 matches the write speeds in the XPS.

Users will feel the consequences every time they boot up the system, or go to load a big game. An SSD and a Core i5 should cause a system to power on in seconds, but you’ll have to wait with the Dell. You’ll have to pay at least $1,700 for a configuration with an SSD, and it’s just a 32GB M.2 drive configured as cache — an improvement, but still not competitive.

The better solution is to pick up one of any number of inexpensive 120 or 250GB SSDs, such as the Western Digital Blue, for under $100. But anyone buying an off-the-shelf gaming rig likely doesn’t want to hassle with an upgrade.

While the base model XPS Tower SE packs in AMD’s latest RX 480, our model was upgraded to an Nvidia GTX 1070. We’ve seen this card in a few systems, but we’ll run it through the synthetic 3DMark benchmark to see how it fares.

As expected, the GTX 1070 in this Dell runs as well as other systems with the same card. In the older Fire Strike and Sky Diver tests, it falls close the the GTX 980, but takes a strong lead in the DirectX 12-powered Time Spy benchmark.

While we’re in the process of updating our test suite, our comparison results are a little slim, but we do have some practical gaming benchmarks for the XPS Tower SE. In Sid Meier’s Civilization VI, the system averaged about 50 frames per second on ultra settings, with ultra-graphical memory usage, in both 1080p and 1440p. Without anti-aliasing on, Deus Ex: Mankind Divided was kinder to the XPS Tower SE, averaging 56 FPS with the settings on Ultra at 1080p, and 39 FPS at 1440p.

These scores don’t hit the ideal 60 FPS we like to see, but they perhaps make the Dell look worse than the reality of the situation. Both Deus Ex: Mankind Divided and Civilization VI are demanding games, and it’s hard to find a budget PC that can handle them at 60 FPS and maximum detail.

The other systems in our test suite were powered by the much faster GTX 1080, at a greater cost. In everyday use, gamers can expect to max out the settings in several modern titles when playing at 1440p and still keep their framerates at 60 FPS or higher. You’ll only need to tweak the settings if you’re playing the latest and greatest titles, or you play on a high-refresh screen.

While Dell’s lower-end systems pack in extra software, the XPS line has always featured cleaner installations. Apart from a couple of non-intrusive apps, the Dell did want to sign us up for an anti-virus trial, and even offered to use our info to do so the first time we booted up the system. It also continued to remind us every time we booted up from then on. You’ll want to uninstall that, or register your system to stop the nagging, but otherwise, it’s pure Windows 10.

The XPS Tower SE includes Dell’s standard one-year limited warranty. That’s not at all uncommon for most desktops, particularly at this price point.

Dell’s unassuming but moderately powerful XPS Tower SE doesn’t break any speed records, and the basic model is lacking some necessities, but there’s a lot to like here, too.

The most significant option comes from Dell itself with the Inspiron 5675 Gaming Desktop and XPS 8930. Both are cheaper models that include a lower-powered GTX 1060, however, performance is still quite strong in both machines. In addition, you’ve got a bunch of other great options for budget gaming desktops worthy of consideration, such as the Asus G11DF gaming desktop and MSI Trident 3.

With a modern GPU, recent CPU, and room for extra drives, there’s nothing stopping the Dell from lasting quite a few years. The only exception is the already-mentioned mechanical drive, which will continue to age as poorly as it feels now.

Eventually, though, the XPS Tower SE will go out of date for most users, because its tight enclosure makes processor and motherboard upgrades difficult.

No, at least not in our tested configuration. We have certain expectations from a system that costs $1,000 or more, and a few of them are missing here. The system would be much more appealing with an SSD, but it’s only available at a much higher price. Dell could instantly improve the XPS Tower SE by adding a small solid state drive to every model, but until that happens, we can’t recommend it.