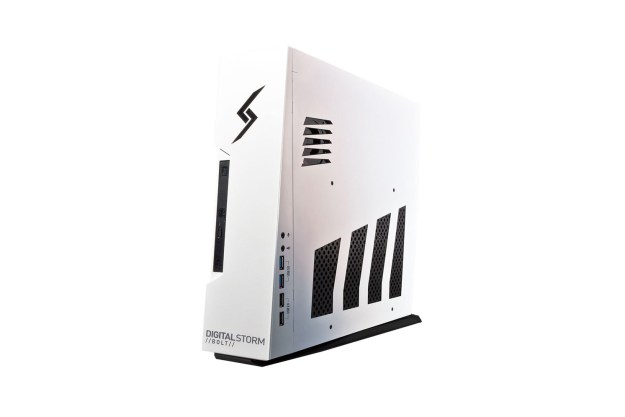 “Though we applaud Digital Storm’s attempt to create a small and attractive gaming tower, the Bolt ultimately strikes disappointment instead of inspiration.”

Desktops are jealous of their thinner, more popular laptop brethren. The sentiment is understandable. Laptops are more attractive, personal, and portable. While desktops stay tucked under a desk, hidden like your father’s box of “gentleman’s literature,” laptops are paraded at meetings and coffee shops. “Look at me!” their owners silently shout. “I’ve got a new. Pretty cool, huh?”

Most desktops have responded to this shift in fortune by sulking and cutting their price. No category is more guilty of this than the gaming desktops which, as a group, have bulked up and doubled-down on gaudy LEDs.

Yet there are notable exceptions. Last year Falcon Northwest surprised us with the excellent Tiki, a stunning and thin tower system that didn’t compromise on performance. Now, Digital Storm has followed that path with the Bolt, a system only 3.6 inches wide that manages to cram in an Intel Core i7 processor and Nvidia GTX 660 Ti graphics card.

The Bolt looks interesting on paper, but has a difficult path to tread. The Tiki surprised us not only because of its size, but also because it managed to stay small without compromising other traits, which is a rare feat. Let’s see if lightning strikes twice.

Over the last few years, gaming desktops moved ever so slightly away from monolithic black boxes and more towards designs with more color. Colors like white with black accents (so a Stormtrooper, basically). The Bolt attracts attention and will certainly be worthy of comment from anyone who enters the room. Take that, laptops!

Many of the aesthetic touches also add function to the enclosure. The cool black stripes on the side and top of the case double as vents, and the subtle flair of material at the base also serves as a stand that keeps the system from falling on its side. As for the cool Digital Storm logo on the front; well, that’s just for looks.

While the Bolt does attract immediate attention, it doesn’t hold up when given a closer look. There’s a whiff of high-school shop class project to the design. Large, ugly panel gaps mar the front and side of the case, which seems to be made from the same metal used to build garage doors. Inserting a thumb drive into a USB port causes the front panel to wobble disconcertingly, and the screws holding the case together are plainly visible.

Problems exist on the inside, as well. Removing the system’s cover is simply a matter of removing four thumbscrews and giving a rearward tug. Once open, however, we found most components difficult to service. Removing the solid-state drive, for example, is a real nail-biter because two screws don’t have enough clear space above them to accommodate a normal screwdriver. This was true even when we took the front cover of the case halfway off – not because we didn’t want to remove it fully, but because we weren’t sure we could do so without breaking something.

Other components are worse. The graphics card is crammed beneath the tiny power supply, the second hard drive is wedged in the center of the case, and RAM is not readily accessible. Though theoretically user-serviceable, the Bolt is a difficult design to work with in practice. Consumers not savvy enough to build their own system (presumably the bulk of owners) will be way out of their league.

The Bolt’s connectivity is decent. Four USB ports (two 3.0 and two 2.0) join headphone and microphone jacks along the front, which is as much as most systems will offer – no matter their size.

Around back there’s two more USB 3.0 ports, four more USB 4.0 ports, two DVI-out and HDMI-out, 5.1 audio hook-up with SPDIF, antennas for a built-in wireless card, two Ethernet jacks, and even an old-fashioned mouse/keyboard port – though only one (so you can only hook up a single PS/2 device). We would have liked to see more USB ports, and maybe eSATA, but their absence is not a deal-breaker.

The slowest car in the drag race

Gamers can grab a Bolt for as little as $999, though that model offers a measly Core i3 processor. Our review unit was instead equipped with the beefier Core i7-3770K, which made short work of our tests. SiSoft Sandra’s Processor Arithmetic Test came to a combined score of 130.92, and the 7-Zip test reached a result of 24,788 MIPS. Though these numbers are short of the Falcon Northwest Tiki and Maingear F131, the Storm’s pint-sized competitors, they are more than adequate for modern games.

PCMark 7 spit out a score behind the Tiki and the F131, but the difference between all three machines is less than 150 points and is within the margin of error. Repeatedly running this benchmark could eventually produce scores that place the Tiki and F131 behind the Bolt.

In-game performance is strong enough to handle any modern title at 1080p and high detail. Titles that are not extremely demanding, like Diablo 3 or Civilization 5, will run at well over 100 FPS in most situations. Even Skyrim averages 80 FPS at 1080p and ultra detail.

Engineers continuously have to battle heat and noise when reducing size. In this scenario, the battle against noise has been lost. There’s a small blower fan near the front of the case to keep the Bolt cool, but there’s no insulation between it and your ear, so the drone is always audible. When our office is quiet, we can hear it from a room away!

Our decibel meter confirmed what our ears suspected. At idle, the Bolt produces 46.1 decibels of sound, which is far above average for both desktops and laptops. Stressing the processor adds another decibel, and playing a 3D game spiked noise to 50.1 decibels.

That’s extremely loud for a desktop system, yet the numbers only tell half the story. Not all noises are the same. Some are deep; others are steady. The noises produced by the Bolt’s cooling are neither. The system emits a grating high-pitched whirr that started to drive us insane.

All of this stands in stark contrast to the Tiki, which we praised as remarkably quiet for any desktop PC, let alone a miniature gaming tower. Digital Storm simply doesn’t live up to the standard. That being said, at least the fans do their job. The video card never exceeded an internal temperature of 75 degrees Celsius, which is well within the acceptable limits.

A bolt in the dark

Digital Storm put a lot of effort into the Bolt, yet it still comes up short. The Bolt is slower, louder, and harder to service than the competition. A disadvantage in any single area would put the Bolt in a precarious position. However, failing in all three areas makes it lackluster, to say the least.

Price comes running towards the Bolt’s defense, ready to fight any criticism. Our system’s as-tested price of $1,599 is about $700 less than the as-tested price of the Tiki and F131. That does seem like a good deal, but the Bolt is less equipped than other systems we’ve reviewed. When armed with similar hardware, the Tiki is $500 more and the F131 is about $400 more. We think both systems are worth the difference – and then some.

We also can’t figure out who this computer is really for. No one needs a thin desktop system. The slender body is cool, but it’s also a luxury. What’s the point of introducing a skinny desktop of middling quality at a cut-rate price? Buyers who want an impressively engineered system will go for the Tiki, while consumers who want value will end up with a larger PC.

Though we applaud Digital Storm’s attempt to create an attractive and affordable gaming tower, the Bolt ultimately strikes disappointment instead of inspiration.

Topics
Best Dell XPS deals: Save on XPS 13, XPS 15 and XPS 17
This stunning DIY gaming PC dream machine is made of glass
The best laptops you can buy in 2022
Apple’s M2 Max chip may bring next-level performance to the MacBook Pro
Mass shipment of Apple’s mixed-reality headset may be delayed
4 tech collabs we want to see on the OnePlus Featuring co-creation platform
This 67W charger is an Apple fan’s retro dream come true
This 38-inch curved Alienware monitor is $450 off (51% claimed)
Alienware teases a monster new 18-inch laptop ahead of CES
Here’s what I’ve learned after using the Quest Pro for one month
Nvidia may finally admit its major mistake with the RTX 4080
These Chrome extensions will put cash-saving coupons right in your browser
The best GPU benchmarking software