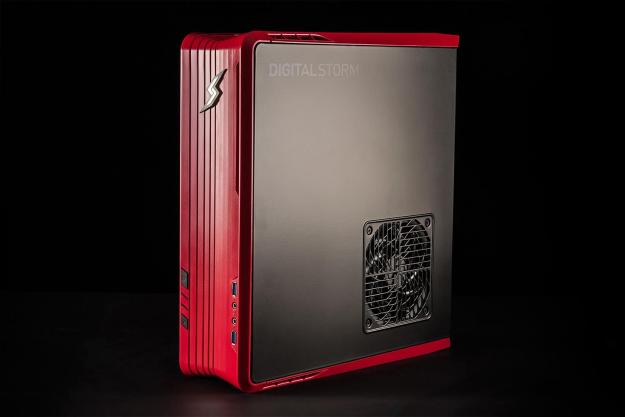 “If you’re looking for an affordable gaming rig, and enjoy a little visual panache, the Eclipse is worth a look.”

The selection of small yet powerful gaming machines has seemingly divided itself into two distinctly different camps. One is made up of extremely inexpensive and small PCs that often have a mobile discrete graphics chip, such as the iBuyPower SBX and Alienware Alpha. The other consists of powerful mini-towers that make few compromises but cost thousands, such as the Origin Chronos and Falcon Northwest Tiki.

Digital Storm’s Eclipse offers a third option. Starting at $699 and leveling off at $1,299, this rig is the same size as the Chronos (in fact, it uses the same enclosure) but provides more modest hardware. Well, perhaps modest is not the correct word: our tricked-out review unit arrived with an unlocked Intel quad-core, eight gigabytes of RAM and a GTX 970 graphics card.

This slots the Eclipse snuggly between the budget boxes and luxurious boutique towers, but the Syber Vapor, which won our Editor’s Choice, is a potential alternative, and offers quicker hardware in its beefiest configurations. Can Digital Storm’s mid-range rig find a way to shine?

Billing itself a “slim tower of power,” the Eclipse comes is 15 inches tall, 14 inches deep and only four inches wide. That’s not much larger than Microsoft’s Xbox One. Its bright red chassis definitely draws the eye, though the matte finish means it won’t be too distracting. That said, gamers who want a machine to blend in with their black-box consoles might be put off by its loud look.

The Eclipse’s thin design made it feel a bit precarious when standing upright. And while it’s advertised as able to lie horizontally, doing so can obstruct the GPU fans in this configuration. You’ll need to find a way to elevate the machine unless it’s used vertically. A set of rubber feet are included to help stabilize the tower in its vertical position, but we found they came off too readily and were easy to lose. They also felt cheap.

Ports in the storm

For such a small machine, the Eclipse certainly manages to provide an ample number of ports and connection options. Two USB ports sit up front, alongside headphone and microphone jacks. On the back are another six USB ports, four of which are 3.0.

Our particular review unit benefited from a Z97 motherboard, which supplied built-in Wi-Fi access, as well as integrated audio. Display ports include two HDMI and another two DVI ports for dual monitor setups. The ports on other versions of the Eclipse will vary depending on the configuration purchased.

Accessing the internals of the Eclipse is a mixed affair. Only one panel of the machine comes off, and while the storage and RAM can be easily accessed, the video card and optical drive are more of a challenge. A plastic panel separates the power supply and GPU from the rest of the components.

Billing itself a “slim tower of power,” the Eclipse isn’t much bigger than an Xbox One.

Getting past the plastic divider to access the video card took nearly an hour; and though your mileage may vary, it is still a chore. Considering that the video card in question is the recently controversial Nvidia GTX 970, difficulty swapping out GPUs may be a deal breaker for some.

Additionally, there is a slot for an added SSD if the mood strikes; but beyond that, there’s not a lot of room for future improvement. Most upgrades will require the removal of previously installed hardware.

Despite the tight fit, the Eclipse definitely packs some power. We tested the Level 4 “ Ultimate” model, which comes standard with an Intel i5-4690K processor, 8GB of RAM, a 120GB Samsung Evo solid-state drive, and a 1TB mechanical disk.

Running Geekbench returned a respectable score of 3959 in single-core and 13006 in multi-core. That’s better than Syber’s console hybrid, the Vapor, and way ahead of either the Alienware Alpha or iBuyPower SBX. Digital Storm’s rig fell short the pricier Falcon Northwest Tiki Z, but it’s also a third of the price.

Crystal DiskMark reached a sequential read speed of 515 megabytes per second and sequential write speed of 496MB/s. Such numbers are typical of a solid-state drive, but that doesn’t mean they’re slow. The Eclipse’s SSD felt snappy in typical use and loaded games quickly, though it could be difficult to install many on a drive with only 120GB of space.

The Eclipse did well in 3DMark, riding the line between affordable console hybrids and full gaming desktops in terms of performance.

Nvidia’s GTX 970, in spite of recent controversy over its memory, remains a serious piece of hardware. The Alienware Alpha and iBuyPower SBX aren’t even in the same league. The more expensive Tiki beat the Eclipse, but only by leveraging two GPUs. That’s not exactly a fair fight!

To get a better idea of how the Eclipse handles gaming, we ran some real-world tests with four different titles – Civilization: Beyond Earth, Diablo 3, Battlefield 4, and Shadow of Mordor. Each game was benched at 1080p and 4K with separate tests for maximum and medium graphical options. Here’s what we saw.

Blizzard’s action-RPG was no sweat at 1080p, hitting an average of 231 frames per second even at the highest detail settings. The Eclipse nearly tripled the results of the Syber Vapor. 4K resolution proved a far greater challenge, but Digital Storm’s rig was still up to the task, averaging 92 FPS at maximum detail with a minimum of 72 FPS.

With its myriad of mechanics to track, Sid Meier’s Civilization series is a great way to test how a machine handles CPU-intense gaming. Running the internal benchmark produced an average 127 FPS at medium detail and 97 FPS at very high. It should be noted, however, that these numbers swung pretty wildly based on how many hex spaces were on screen at one time.

4K was too much for the Eclipse to handle at anything beyond the medium detail preset. Very high slowed the average to 40 FPS with a minimum of 32. While still playable, the game felt jittery at such settings, and was not as enjoyable as it otherwise could be.

DICE’s popular shooter wasn’t an issue at 1080p, as it managed an average of 140 FPS at the medium detail preset and an average of 80 FPS at ultra. As the numbers suggest, Battlefield 4 was quite enjoyable at this resolution.

The Eclipse looks to offer HD gaming for those with PC needs, but a console budget.

4K was also playable at the medium preset thanks to an average of 80 FPS with a minimum of 70 FPS. Turning settings up to ultra, however, reduced the average to 33 FPS and the minimum to 24 FPS. While technically playable, we’d rather dial back the detail to enjoy a better framerate.

Orc-hacking seemed to suit the Eclipse nicely when this game was played at 1080p, as it averaged 125 FPS at medium detail and 78 FPS at ultra detail. The game generally felt smooth, though some stutter was noticeable when transitioning into execution animations.

Ramping resolution up to 4K reduced the average to 44 FPS at medium detail and 30 FPS at ultra. These results are respectable given the Eclipse’s modest price tag, but they’re not ideal, and most gamers will want to stick with a lower resolution.

The Eclipse’s mild purr is most likely attributable to its excellent airflow. Built with gaming in mind, the tower has two dedicated GPU fans, side and power supply vents, and a third fan above the processor. Registering 40.8 decibels while idle, the FurMark GPU stress only pushed the machine to 45.9dB. That’s quieter than the iBuyPower SBX, but louder than the Syber Vapor.

The Eclipse is easy on the juice, as well. It pulls just over 50 watts while idle, and less than half that of the Chronos (256 watts to 565 watts) at full load. While the Eclipse might not be as graphically powerful as some of its pricier competitors, its sound and energy footprint is much more palatable.

Digital Storm includes a 3 year limited warranty and lifetime access to its customer care team with the purchase of an Eclipse. The company also offers free labor on upgrades, or “the option for any customer to make upgrades to their Digital Storm system without voiding the warranty,” which may offer consolation to those reluctant to open up their PC.

Corsair K70 gaming keyboard  ($120)
Want the ultimate gaming keyboard? Then you want this Corsair. You can even choose you favorite type of Cherry MX switch.

Rosewill 45-piece PC toolkit  ($19)
Working in the Eclipse’s tight quarters can be difficult, but these tools will make repairs and upgrades a cinch.

Less expensive than high-end towers, and more powerful than console-hybrids, the Eclipse carves out an attractive place in the gaming landscape. Its four levels of pricing also offer some flexibility for those who are tight on either cash or desk space. The connection options outpace those offered by consoles, and efficient fans keep the Eclipse reasonably quiet even when handling heavy graphics.

The Eclipse does have its problems, however. It’s not as small as alternatives like the Syber Vapor, and its chassis can prove difficult to upgrade. Strangely, in spite of its reasonably large case, the Eclipse also comes up short of the Vapor’s quickest configurations. While the model of Vapor we tested was reasonably priced, high-end configurations can be purchased with a GTX 980 and quicker Core i7 processor for $1,500, giving the Eclipse a challenge. Rolling back the Vapor to a configuration similar to the Digital Storm Eclipse we reviewed puts the former at a $50 price advantage.

That doesn’t sound like much, but the Vapor is more attractive, slightly smaller, arguably easier to upgrade, and comes standard with a mini-keyboard and gamepad. These traits make the Eclipse look a bit drab, and Digital Storm doesn’t offer many hardware options to spice things up.

Make no mistake: the Eclipse is a respectable machine, and as our benchmarks prove, it’s more than capable of handling modern games at 1080p resolution and maximum detail. There are better alternatives, however, which makes the Eclipse difficult to recommend.

Topics
The best PC power supply for 2023
GPU prices and availability (February 2023): how much are GPUs today?
Intel targets RTX 3060 takedown with Arc Alchemist price cut
The first RTX 4080 laptops are much cheaper than we expected
ChatGPT has a new way to detect its own plagiarism
Samsung Galaxy Book 3 Ultra vs. MacBook Pro 16-inch
The Galaxy Book 3 Ultra is Samsung’s most powerful laptop ever
Nvidia may have another monster GPU in the works, and the price could be outrageous
AMD’s Ryzen 9 7950X3D pricing keeps the pressure on Intel
What is ChatGPT Plus? Everything we know about the premium tier
ChatGPT Plus to bring priority access during peak times — at a hefty price
Usually $3,879, this Lenovo laptop is down to $1,479 today
Get this Asus gaming laptop with an RTX 3060 while it’s $400 off