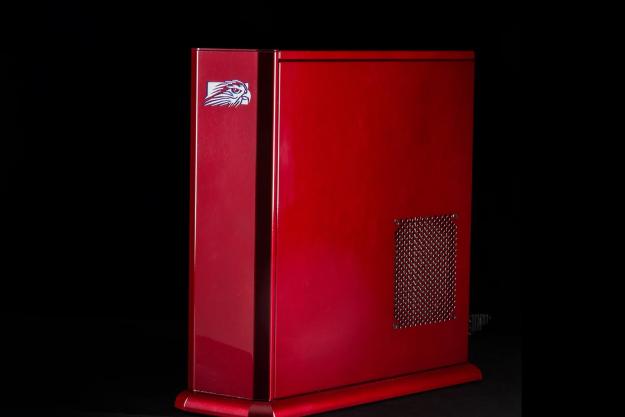 “The Tiki Z crushed our expectations of what a mini-tower can do.”

For over two decades the engineers at Falcon Northwest have set the standard for personalized, customized PC gaming rigs built just to your specifications. As other companies flood the market with cheap competitors and budget builds, few have stayed true to their mission as staunchly as Falcon, and this dedication is nowhere more evident than in the new Tiki Z.

The original Tiki, which first came out two years ago, is made to satiate all the desires of high-end gamers without demanding a high-end price (though it certainly has expensive configurations). The Tiki Z, though, amps the hardware up to 11 with an Intel Core i7 4790K, 16GB of RAM, two terabytes of SSD storage, and the card that is its namesake, Nvidia’s Titan Z. All of this is crammed into a system that takes up half the space of a normal mid-tower.

Can you have a great gaming experience without sacrificing legroom?

Much like iBuyPower’s SBX, the case of the Tiki is meticulously designed to fit every component that’s been slipped inside without a centimeter of excess space. A metal bracket holds both solid state drives, the mechanical drive and the optical drive into place. While the hard drives can be replaced the process requires a little patience and the removal of numerous screws. The RAM is hard to access until the hard drives are moved, and the same goes for the video card, which is installed at a 90-degree angle to its normal orientation through the use of a PCI spacer card.

The air vents on the side line up perfectly with those of the Titan Z, which makes sense considering the case was laser cut for the card, and the cables for the CPU liquid-cooler have but a few millimeters to move around once the outer shell is cracked open. Replacing the processor is a particularly difficult task, as the motherboard must be taken out of the case to remove the CPU cooler.

On the outside, though, the Tiki screams sexy. Its svelte, clean lines blend into a heavy, sturdy base, and everything about it reminds you it’s been built to make a statement. The Falcon Northwest logo is emblazoned by white LEDs on the front of the rig, and on the side the Titan Z is gently lit by the same color scheme. It seems the company knew which features would define this computer, and actively decided to accentuate them without being tacky.

Plug it in, plug it in

On the back of the Tiki you’ll find two HDMI 2.0 ports and two DVI, courtesy of the Titan Z. The motherboard is stocked with four USB 3.0 ports, four USB 2.0, and three audio jacks, representing line in/out, with an extra slot for the microphone on the side.

Two Wi-Fi antennas line an RJ45 Ethernet jack and SPDIF out closely, and the Tiki also comes with a single PS/2 input to accommodate any older keyboards and mice you might have laying around.

On the top of the case you’ll also find two readily accessible USB 3.0 ports, another audio out jack, and an additional microphone in.

A wolf in sheep’s clothing

The Tiki Z plowed through our benchmarks, proving a small yet properly built PC can punch above its weight.

In Geekbench tests the Z can only be compared with the absolute cream of the crop, coming just behind its bigger, badder brother, the Northwest Mach V, and slightly above AVADirect’s Z97 Quiet Gaming rig.

Crystal DiskMark’s read/write results were equally impressive, at 987 megabytes per second read, and 865MB/s write. These results come in just behind the Falcon Northwest Mach V but destroy less expensive mini-PC competitors, like the SyberPower Vapor, which reached sustained reads of 185MB/s.

Despite Nvidia’s claim that the Titan Z isn’t built with gamers in mind the card had no problem handling the best of everything we threw at it. While in 3DMark the Tiki was trounced by the larger Mach V (the first place it’s faltered yet), it still held its own against many options in a similar price range. The AVADirect Z97 Quite Gaming, for example, easily fell before the Tiki.

A solid gaming keyboard is a must-have for anyone who enjoys first-person shooters or strategy games, and few are better than the K70. Its responsive Cherry MX Red switches and anti-ghosting capability ensure smooth, conflict-free input.

Logitech has made the best-selling gaming mouse for years. While others can match the quality of the G502, which is impressively built and includes on-the-fly DPI customization, Logitech’s mouse stands out because it offers everything a gamer could want at a very reasonable price.

This gaming monitor pairs perfectly with the Tiki Z. It is compatible with Nvidia’s G-Sync technology, which eliminates tearing and stutters, and offers a refresh rate as high as 144Hz. The monitor’s maximum resolution of 2560 x 1440 pairs well, too, offering sharp gameplay at more than six frames per second in any title.

The HypreX Cloud headset is a great way to keep in touch with other players during the most hectic games. It’s light, comfortable and offers a pair of strong 53mm drivers. You can also use it with not only a PC but also a Mac, PS4 or Xbox One, which is useful if you game on devices besides the Tiki Z.

Sid Meier’s Beyond Earth has proven itself a bit of a divider between what makes a good rig, and what makes a great one. The game’s graphics aren’t hugely impressive, but a large number of objects can be on screen at once, and the game relies on a balanced relationship between CPU and GPU to achieve optimal results.

Battlefield 4 was able to achieve stellar results. At medium detail and 1080p the computer essentially maxed out, topping at 201 frames per second, hitting a low of just 194, and averaging a median of 198. The Tiki barely blinked when we cranked everything up to ultra, posting yet another 201 FPS maximum, a minimum of 164, and an average of 187.

Finally, we come to the game that separates the men from the boys. Shadows of Mordor can bring even powerful gaming desktops to their knees. How does the Tiki Z measure up?

At idle the Tiki Z is whisper quiet, clocking around 20 decibels on our meter, which is still well below most gaming rigs out there right now. Once we got into the thick of it, though, it was hard to hear the bullets whizzing past our head over the blast of the Titan Z’s boisterous fan, which registered almost 51dB at load.

On the outside, the Tiki Z screams sexy.

Another problem we found with the design of the Tiki Z came in the form of an unrelenting torrent of heat that poured out its vents every time we gamed. Sitting beside this rig is borderline uncomfortable while running top of the line games. Even with a window open and the cold rushing in, this thing pumped out warmth like a space heater.

This is not unexpected. When components this powerful are cramped in a small case all the heat has to go somewhere, and it can turn extended frag sessions into a sauna.

The Tiki drew a decent amount of power for computer in such a compact shell, but that wasn’t too alarming considering what it’s equipped with.

At idle it drew a typical amount of power for a computer this quick, around 110 watts, which is just under what we rated for Falcon’s macro-tower cousin, the Mach V. At load things jumped up considerably however, to about 580 watts during the most intense moments of our Furmark benchmarking test.

The Tiki Z comes standard with Falcon Northwest’s three-year parts and labor warranty, that also includes a one-day shipping guarantee for all defects which might surface over the first year of ownership.

The Tiki proves that you don’t need a premium plot of real estate for a premium gaming experience and still comes in under the sticker price you’d expect from a machine this luxurious. Yes, the approximately $4,900 price tag is significant, but it’s reasonable for a desktop this powerful.

Also remember that half the MSRP is wrapped up in the Nvidia Titan Z. That makes the rest of what’s received look even more reasonable. Even when we tried to build a comparative machine on our own online, we only came about $200 under what the Tiki Z, and that’s not including the sleek, anodized custom aluminum case.

Overall, the Tiki Z is a great way to round out Northwest Falcon’s PC gaming lineup, and its micro-tower manageability makes it a solid pick for gamers who want maximum power out of minimum space.

Nreal’s Air AR glasses head to the U.S., ready to rock with iPhones
Best gaming monitor deals for October 2022
The best Mac games for 2022
AMD Ryzen 7000: Everything we know about Zen 4 CPUs
Save $550 on this HP gaming PC with an RTX 3070 today
Hurry — Dell XPS 13 is $550 off in Dell’s monster clearance sale
Flash deal drops this 15-inch Dell laptop to just $250
Best Prime Day Deals: What to expect from the October event
Twitter is building a menu option for Twitter Shops
Apple has a bunch of new products coming, but not this year
Lenovo is practically giving away this 2-in-1 laptop today
Lenovo Legion i7 gaming PCs and laptops both got massive discounts
Lenovo’s ThinkVision ultrawide curved monitor is 40% off today