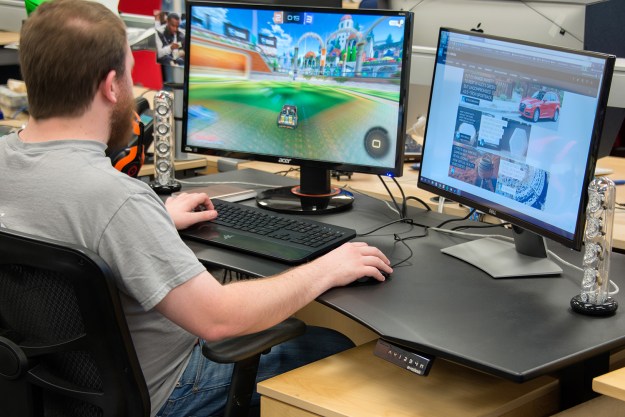 “The EvoDesk gives gamers both an extra edge, and a great excuse to get on their feet.”

Let me paint a picture for you: It’s almost 1:00 AM, you’re 28 minutes into a rousing ranked match of Heroes of the Storm, and your team is counting on you, the trusty carry, to finish the job. You can hear them yelling in your headphones, but with no caffeine left nearby, you’re starting to fade – and fast. What you really need is to reinvigorate, and change your stance.

The curve of the front of the desk helps with comfortable positioning whether standing or sitting.

The solution isn’t one of caffeine or mind-altering substances, but of rising to your feet, taking the power into your hands, and finishing what you started, but the only way to do so is with a standing desk. Not only is standing while you frag a healthier option, but taking a break from sitting has numerous benefits for mental acuity and focus. That means the added bonus of sharper reflexes and faster response times. Standing while playing might be an advantage.

Whatever the reason for wanting to rise to the challenge of serious PC gaming, the EvoDesk is definitely the only sitting-standing desk that has its crosshairs locked on gamers. It starts at $600, which means standing has to be a priority to make a desk like this worth it. Is the EvoDesk gaming desk a must-have, or the modern day Power Glove?

What makes it a gaming desk?

What defines the EvoDesk as a gaming desk is the coating on the desktop itself. EvoDesk forgoes the traditional wood or laminate in favor of the “EvoGuard” finish. This lightly textured surface is designed with high-intensity light reflecting points designed to improve the accuracy of a laser sensor, like those used in gaming mice.

It’s also a gaming desk in terms of the offered feature set. The EvoDesk has a cable pass with attached run, single and dual monitor arms, and Harmon Kardon speakers with mounting plates. The rest of the difference is one of marketing, and pre-built configurations based around “levels” with more advanced feature sets. Ultimately, they can all be heavily customized to suit different needs and spaces.

Normally, a pair of desk legs isn’t something to be excited about, but the legs on the EvoDesk actually include a few useful features. Namely, they’re responsible for lifting the desk up, and it moves at an impressive 1.5 inches per second. That’s a brisk pace, but light touches let you adjust the height in a more precise increments.

The control panel has four preset memory options, but I didn’t find them to be that useful. Normally the desk is in the sitting or standing position, and whenever I wanted to go from one to the other, using the up or down button was easy enough. The bump to the programmable unit doesn’t break the bank at $50, but it also doesn’t provide a lot of functionality apart from showing the height, which again, isn’t terribly useful.

With the EvoGuard desktop there’s a standard rectangular option, or a configuration with the curved Ergo Edge front. The brand claims this slight shape adjustment means comfortably reaching an extra 22 percent of the total desktop space. Whether that’s true or not is hard to verify, but there’s no doubt the shape of the front of the desk helps with positioning whether standing or sitting. As an added bonus, the inside of the curve has a shallow slope, which makes resting on it much more comfortable than without it, particularly when standing.

The star of the show, however, is the EvoGuard coating. The textured black design stands out in our office of wooden desks that, in comparison, look like they were pulled off an old ship. This slick, modern take on the desktop fits the current theme of glossy and matte finishes found on most gaming peripherals.

A note on the lift mechanism

We’ve had a handful of standing desks in for review over the last couple of months at the Digital Trends office in Portland, and we’ve noticed a trend across almost all of them. The frame and lifting mechanism for the desks is the same regardless of manufacturer.

That means that choosing between different brands mostly comes down to selecting a desktop and finish that you like, as well as selecting from the configurable features that fit with your needs. In the case of the EvoDesk, the star of the show is definitely the finish.

Not only does it replace your mousepad by providing an excellent surface for, but it’s also much less expensive than solid wood or composite options. The desk’s three available colors are all more at home with a full set of gaming peripherals than any stodgy wood finish.

While assembly was relatively straightforward, it’s worth setting aside the better part of an afternoon for the task. You’ll also need a lot of space to set it up, at least as much as the space the desk is going into, if not more.

The first step is assembling the legs. It’s a fairly simple process of putting the pieces together with some Allen and some Philips screws. After the frame is assembled, it’s attached to the desktop in a few key points with screws that can be turned by hand, but would be quicker with a light hand drill.

Assembling the desk ultimately leaves it sitting on its top on the ground. Two people are needed to turn the desk over and move it into position. The instructions warn that trying to turn it over from one side only could damage the desk.

ASTRO Gaming A40 PC headset kit ($150.03)
Easily one of the best gaming headsets on the market, and it costs half as much as the Harmon Kardon speaker option.

EvoDesk’s goal is to push gamers to their feet, and it just might be successful. By pairing up the right feature set with a desktop material and finish built for gamers, there’s no match that can’t be won by taking a stand.

While the EvoDesk’s starting price of $600 might seem like a lot, it’s actually right in line with other standing desks we’ve reviewed, such as the UpLift 900. The EvoDesk’s gaming finish on recycled wood is the least expensive desktop material offered, but it has many advantages over a real wood surface.

Just because it’s the only standing desk built for PC gaming doesn’t mean EvoDesk cut corners. The precision desktop looks right at home with a couple of high-end monitors and a flashy mouse, and replaces the need for a mousepad entirely. PC gamers, pay attention – it’s time to take a stand.

How to update your BIOS