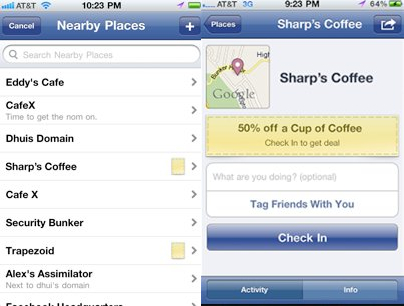 Remember back when Facebook was in talks to acquire Foursquare? Now they don’t have to. With the announcement of Facebook Deals today, any mayors and candidacy hopefuls out there might be wondering what this means for Foursquare. Speculation is leaning towards nothing good.

Facebook’s introduction of Places two months ago should have served as a warning sign for Foursquare, but the company denied any sort of unease. Where were the rewards with Places? All Facebook’s location-based application offered was a measly posted update to the mini-feed of where you were. Foursquare had mayors and badges and the occasional coupon. But paired with the newly launched Deals, Foursquare’s got some serious competition.

Like its’ predecessor, Deals is free and simple for vendors to use. As a business, would you rather make a play for Facebook’s 500 million users, or Foursquare’s 4 million? It’s a pretty easy decision. And once a business has created a deal, it’s also shared to all fans of the page, which is better advertising than Foursquare has available.

Foursquare’s “Specials” feature lets businesses reward customers similarly to Deals, but it caters to the site’s social ladder. It advises retailers to “show extra love to your venue’s Mayor!” Deals doesn’t require a game where you unlock anything, or rack up points, or become the metaphoric mayor – all users are privy to all deals, and this is likely going to get it more action.

And for consumers, Deals also offers options when it comes to incentives. A virtual punch card is available, as well as the chance of giving to charity, or to be rewarded for bringing friends.

Despite any ominous premonition, Foursquare has proven itself a successful and innovative business, with a devoted following – and it has been very beneficial for some businesses. CEO and founder Dennis Crowley also revealed at the ad:tech conference today that the site is working away on improvements to the site, included its rewards system, so don’t count it out yet.

But Foursquare isn’t the only potential victim. Popular daily deal site Groupon could also take a hit. In the same press conference as it introduced how easy its’ new mobile app lets users claim Groupon deals, Facebook more or less announced its plans to fiercely compete with the site. Facebook offers its Deals service to retailers for free, and Groupon takes a percentage of what vendors make off its coupons.

Just to solidify its place in the location game, Facebook released the Places API (which used to be read-only). With a few simple lines of code, Facebook is encouraging any and all third-party applications to allow users to link their check-ins on any location-based sites to its’ site. Advantage, Facebook.