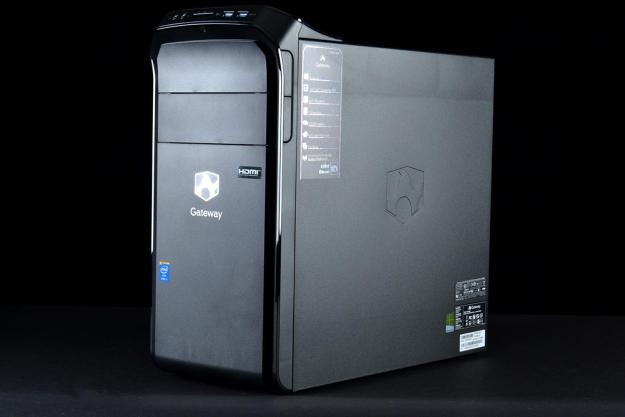 “Fast, affordable and easy to upgrade, the mundane Gateway DX4885-UB3A checks all the right boxes and avoids any major problems.”

You could be forgiven for forgetting that Gateway still makes desktops. The manufacturer once known for its cow-themed branding was purchased by Acer in 2007, and it shows. Besides the label on the front of the DX4855-UB3A, this desktop wafts the scent of Acer from every creak and crevasse; the enclosure, model name and even specifications are reminiscent of Acer’s own desktop computers.

This isn’t necessarily a bad thing, however, as Acer is known for providing value in inexpensive systems, and the Gateway DX4885-UB3A is nothing if not affordable. Though our review unit boasts a relatively mundane Core i5 4430 quad-core processor paired with a one terabyte hard drive and eight gigabytes of RAM, it is actually the most premium offering in the DX line. This does not, however, lead to a premium price, as our review unit can be found at various retailers, including brick-and-mortar stores, for $599.

That’s not much for a new desktop with a 4th-gen Intel processor, and a glance at the competition on Newegg.com shows no competitors with identical specifications selling for less. Does this mean the Gateway DX4885-UB3A is a bargain? Or is it just cheap?

A squint away from an Acer

The DX series, regardless of the variant in question, offers a compact black case that measures just less than 15 inches tall and is barely more than seven inches wide. Though there are smaller PCs available, this Gateway can hardly be accused of gigantism, and is very easy to place on or under a desk.

Like Acer desktops, the enclosure features a top front lip which protrudes outwards, providing easier access to the two front-facing USB 3.0 ports, the headphone and microphone jacks, and the card reader. While the inclusion of two front USB ports is merely on par with most competitors, their positioning at the top of the case is superior, particularly when the desktop is positioned below a desk.

Unlike Acer desktops, the DX series does not include a grippy soft-touch top panel that might be useful as a shelf for a smartphone or tablet. Excluding this convenient feature seems odd.

Connectivity on the rear panel is a bit slim, consisting of just four USB ports (two 2.0, two 3.0) along with HDMI and DisplayPort for video-out and three audio jacks. The system supports ancient PS/2 connections used with old keyboards and mice, yet the bundled peripherals are USB.

Big on the inside

Though small, the Gateway DX4885-UB31 has plenty of room for upgrades. The conventional interior layout is centered around a Micro-ATX motherboard that includes two vacant RAM slots and an unused PCI-Express slot, making memory and video card upgrades a cinch. The only limitation in that regard is the power supply, which produces 300 watts; however, because the layout is open, replacing the PSU is possible without removing any other components.

Gateway’s DX4885-UB3A is a solid value desktop that’s a cinch to upgrade.

While the motherboard offers several unused SATA ports for storage upgrades, there are no free hard drive bays available. The only open slot is an optical bay, which could be used to house a hard drive via a bay adapter. The existing hard drive is easy to service, because it’s oriented so that it can be removed without taking out other components.

Despite its bargain price, this Gateway could be turned into a beefy gaming rig or powerful workstation, due to the fact that it has space for a large video card, large power supply and a sizable CPU cooler. The only long-term problem is the lack of a forward cooling fan mount, but this obstacle is a complication rather than a roadblock.

No performance surprises, but that’s okay

The Core i5-4430 in the DX4885 is a processor we’ve tested before, so we weren’t shocked when it produced respectable SiSoft Sandra Processor Arithmetic and 7-Zip scores of 77.47 GOPs and 14,643 MIPS, respectively. These marks place the system on par with other low-end and mid-range desktops. Subjectively, the Core i5-4430 provides all the grunt an average user can hope for, as it feels responsive and also cranks through demanding tasks (like video encoding) with ease.

Less impressive, however, is the hard drive’s PCMark 8 storage score of around 2,755. This is the second-lowest score we’ve received since we started using this benchmark several months ago. It’s also well below desktops and laptops that wield solid state drives. Expecting an SSD in this price range is unreasonable, but it also points to the biggest flaws with today’s budget desktops. They simply lack the snappy, responsive feel users have come to expect from their experience with smartphones, tablets and ultrabooks.

Graphics performance, on the other hand, is good given the lack of a discrete graphics card. We got a score of 5,834 in the 3DMark Cloud Gate test, along with a score of 744 in 3DMark Fire Strike. These numbers are well in excess of past integrated graphics chips and demonstrate that, when given the chance to stretch its legs in a desktop, Intel’s HD 4600 can provide usable performance. Even so, gamers should be aware that this system is merely adequate for gaming; it will run games, but the latest 3D titles will manage a playable framerate only at medium or low detail, if that.

We’ve been harping on Acer for its atrocious bundled keyboards over the last two years. Thankfully, while many of this Gateway’s features take inspiration from its parent company, the keyboard does not. We got a large, full keyboard with old-fashioned beveled keys and plenty of space. Media keys are restricted to mute, volume control and sleep, but that’s not a major issue.

The mouse is a less impressive two-button affair with a simple scroll wheel that relies on infrared sensor technology. We also thought that it felt a bit too narrow in-hand, though others may differ; mouse feel often depends on the user. Still, most will find that it operates well enough to make the purchase of a third-party mouse unnecessary.

Unlike what you’ll find on many Acer machines, the overall bloatware load on the DX4885 is light. There is a Gateway store shortcut on the desktop and a shortcut to Acer Remote, which is an Android/iOS app that can be used to share media and photos between the desktop and a smartphone. Though potentially useful, there are plenty of third-party apps that do the same.

Still, the most of the shortcuts are links rather than actual programs, which means they can be deleted without worry. Even the apps found in the Windows 8 start screen are useful, which include household names like Netflix and Skype.

There’s not much to say about this desktop’s cooling, as it never registered on our decibel meter no matter what load we placed on it. This is not surprising considering that the DX4885 uses an efficient 4th-gen Intel Corei5 processor and lacks discrete graphics. While fan noise is noticeable if you listen closely, it generally blends into the background, and won’t penetrate your eardrums with any whine or buzz that might annoy sensitive users.

Ultimately, the Gateway DX4885-UB3A manages to provide solid performance without suffering from any cringe-worthy blemishes. The price is right, the internals are easy to upgrade, and the system runs quietly.

Our only serious beef with this desktop is the barebones connectivity. With only six USB ports in total, and only two video outputs, this Gateway is behind the competition. Most users will find the Gateway DX4885-UB3A’s port selection to be adequate, but those who have several external hard drives and peripherals like webcams and headsets will quickly fill up this desktop’s ports.

However, this flaw isn’t big enough to keep us from recommending the Gateway DX4885-UB3A. This system is a good value, and it can easily be upgraded into a beastly high-end PC down the road. Buyers on a budget can hardly ask for more.