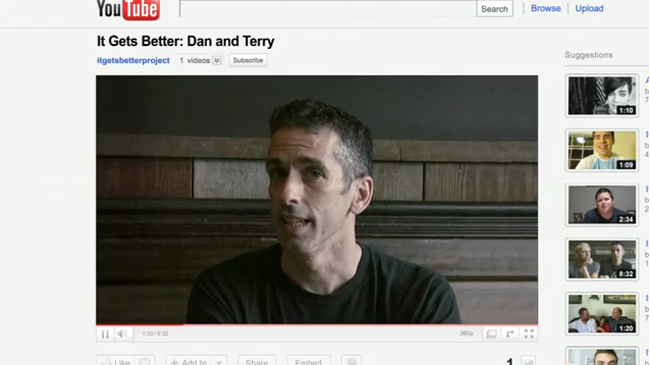 As Don Draper would tell you, good advertising always seeks to connect consumer with product in an emotional way. And with Google’s first television commercial for its Chrome browser, the tech giant has gone straight for the heartstrings.

Rather than focus on Chrome’s superior speed, as its past Internet-only ads have done, Google centers this ad around the “It Gets Better Project,” which seeks to help gay young people who are struggling in the face of bigotry and societal adversity. The It Gets Better Project was first launched in September 2010 by author Dan Savage, who posted a video on Google-owned YouTube to help “inspire hope for young people facing harassment.”

By launching a traditional television ad campaign for its web browser, Google has taken the so-called “browser wars” to an unprecedented public level. Google is currently in a firefight with Microsoft, whose series of Internet Explorer browsers are currently used by 45 percent of all Internet surfers, The New York Times reports, more than any other browser line, but still less than the 53 percent market share IE held last year. Chrome, on the other hand, only has about 18 percent of the market, making it the third most-used broswer. Mozilla’s Firefox browser sits in the No. 2 spot with roughly 30 percent. Apple’s Safari holds only 5 percent of the market.

The reason Google — which rarely spends money on TV ads — has decided to promote Chrome in the mainstream (the ad first debuted during last night’s episode of “Glee”) is because those who use Chrome almost always use Google search and, therefore; see other ads, bought through Google’s wildly successful AdSense online advertising platform. This is because Chrome has only one place to type in information: the “omnibox,” which serves as both the address bar and the search bar, and automatically pumps queries through Google search, by default.

“Instead of looking for Google and looking for search, the omnibox gives them immediate access to Google search,” said Google chief financial officer Patrick Pichette during a conference call with analysts last month. “On a tactical basis, everybody that uses Chrome is a guaranteed locked-in user for us in terms of having access to Google.”

So, don’t be confused by the Google’s intentions in launching this ad. Yes, it is heartfelt and tastefully made. Yes, it takes a brave moral stance behind the LGBT community, which continues to face real and dangerous threats from homophobic forces that seethe throughout the US and the rest of the world. But it still has a lot to do with making money — not that there’s anything wrong with that…

Topics
The latest Firefox release redesigns its private browsing feature
Microsoft Edge now warns when your typos can lead to being phished
Google Chrome tops this list of most vulnerable browsers
New phishing method looks just like the real thing, but it steals your passwords
The best laptops you can buy in 2022
This free service just hit a huge website security milestone
Best VPN services 2022: today’s top picks
This stunning DIY gaming PC dream machine is made of glass
Apple will pay $50M to settle the butterfly keyboard fiasco
This 15-inch Windows laptop is a great buy while it’s just $139
Get Samsung’s 49-inch Odyssey G9 Monitor for under $1,000 today
Why Starlink download speeds are experiencing double-digit dips
Hackers just stole LastPass data, but your passwords are safe