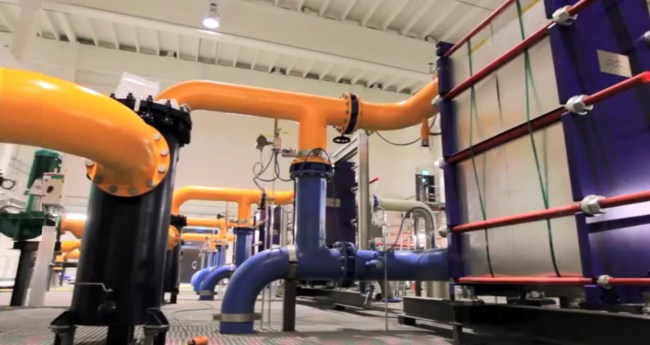 Google is once again showing off its big environmental conscience with video of the new Hamina, Finland data center, due to open up towards the end of the year. The new center, much like Google’s Saint-Ghislain center, will not be using chillers in its cooling system. Instead, waters from the Baltic Sea will be harnessed to keep servers cool.

Google paid $52 million for the Summa paper mill that yielded the 410 acres of land where the new data center is being built. Stora Enso, the paper-making company that formerly owned the land, closed the paper mill down in 2008 because of the drop in newspaper and magazine-paper production.

According to the video, the center collects cool water through an inlet pipe and travels through granite tunnels built by the paper mill in the 1950s. The Register has found that the pipes are two meters in diameter and “the system uses 20-year-old water pumps installed by the mill.” The tunnels and pipe are kept clear of blockage by using a small submarine to explore regularly.

The water travels through four straining systems and meets a water-to-water heat exchanger. The heat exchanger cools a separate stream that carries on to the data center. Google senior director of data center construction Joe Kava says that once the water’s purpose is met, “we return the temperature that is much more similar to the inlet temperature, so we minimize any environmental impact in that area.”

The total costs for the structure comes to roughly $260 million, including the purchase price but the money Google saves from cooling costs will be significant. The Register also reports that the Finland data center will use wind power from the wind park next to the facility.

Custom PC liquid cooling isn’t as scary as you think

Google has a new plan to replace cookies. Will it work?