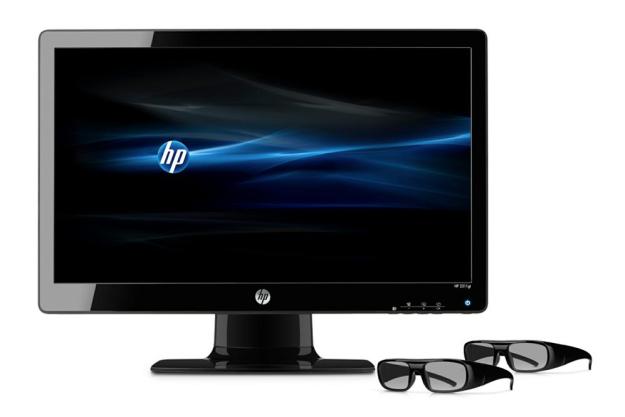 “Its passive 3D mode goes a long way in improving impressions, but you should be prepared to make extensive use of 3D to make its $270 price tag feel worthwhile.”

You can almost hear the din over 3D subsiding these days, like a band of carnies riding into the sunset after shaking down every kid in town for a ride on the Sea Dragon. The novelty of seeing television in three dimensions for the first time has come and gone. The new rules of the game: 3D is a feature, not the sole reason to buy a display, and it has to be priced accordingly.

HP seems to get it. Rather than promising to blow you out of your swivel chair with hair-raising 3D visuals, the new HP 2311gt has been positioned as an affordable desktop monitor that just happens to do 3D, too. No crazy gimmicks, just another feature to join the likes of LED backlighting and full 1080p HD resolution. But does its utility as a normal display suffer at the hands of 3D, and is it worth the premium?

Nowhere near as angular at HP’s futuristic x2301, the 2311gt instead adopts a sleek, rounded look that avoids calling too much attention to itself while actually looking quite sharp when you stop to look. If you’ve seen HP’s earlier 2310e, the design of the 2311gt should look familiar. It’s basically the same monitor. As usual, gloss black plastic is the order of the day, but unless you like to get handsy with your monitor, fingerprints shouldn’t be too much of an issue.

One marked change from the 2310e comes in the form of new on-screen display (OSD) buttons, which are now physical buttons below the bezel, rather than capacitive touch buttons. The “swipe strip” from that monitor is also gone in favor of traditional + and – buttons to tap through adjustments.

Like most consumer monitors, the 2311gt has a simple base that only allows it to recline from straight up and down to about 25 degrees cocked back. That should be plenty of wiggle room for most seating positions. Keep in mind that it offers no VESA mounting holes on the back, so the stand it ships with is the stand you’re stuck with.Swivel the monitor around and you’ll find DVI, VGA, HDMI connectors — an adequate trio for hooking it up to just about anything. Like many of HP’s new monitors, the ports face out rather than down, which makes cables substantially easier to plug in and swap on the fly.To keep the monitor as thin and lightweight as possible, the 2311gt uses a laptop-style power brick. While it does present one more piece to potentially “lose,” you’ll definitely appreciate the lack of bulk in the 8-pound display when maneuvering it around on your desk. This arrangement also provides plenty of cord length, so it’s no issue if you need to slide the monitor to the far reaches of your desk, away from the nearest power outlet.

The HP 2311gt uses a 23-inch twisted nematic (TN) display with LED backlighting. It can consume up to 45 watts at full brightness, which doesn’t make it a watt guzzler by any means, but it fails to match the green appeal of some more miserly monitors, like the aforementioned 2310e (which maxes out at 32 watts). HP claims it delivers a 1,000:1 native contrast ratio, 250 cd/m² brightness, and 5ms response times.

Although physical buttons represent a step back, we actually prefer having hard buttons to press to make adjustments on this monitor. Every press registers with a firm click, and holding a button down on an adjustment that goes from 0 to 100 quickly “ramps up” the adjustment speed so you’re not waiting all day. As usual, you can choose between several presets like movie, photo, gaming and text, or set your own. The controls are pretty rudimentary: You can tweak brightness, contrast, color, and sharpness, nothing fancy. Even so, there are some extras like dynamic contrast, power-saving settings, and even a “backlight hours” counter.

Unlike a lot of monitors that come set from the factory in a “vivid” mode designed to drop jaws in Best Buy and sear your tender eyes, the 2311gt actually comes out of the box relatively viewable. The biggest problem we noted was a clear greenish cast that was most visible with large chunks of white. We were able to amend it with some color calibration, but the big drops to green and blue definitely left the image a bit dimmer, too.

Despite its issues with inaccurate color right out of the box, the 2311gt actually does pretty well with its color palette. According to our Datacolor Spyder4 calibration sensor, it covers 95 percent of the RGB spectrum. That said, we did notice some light banding in gradient tests, suggesting that the 2311gt can’t muster every color necessary to pull off a smooth transition between two opposite shades.

Besides the skewed color, the 2311gt had quite a bit of difficulty displaying both extreme whites and extreme blacks. Near-white and near-black were both indistinguishable from the real thing in our test patterns, which can make details hard to distinguish in dark scenes, or look blown out in extremely bright scenes.

Viewing angles are well within what you’ll need to comfortably view this monitor from a typical seated position at a desk, but playing with the color calibration too much will exaggerate the distortion that occurs when you get too far off angle. For instance, after adjusting for the strong green cast, the monitor tended to look a little pink from above and below.

Since the HP 2311gt offers passive 3D, it uses a film-type patterned retarder (FPR) to polarize every alternating line of pixels. While you shouldn’t be able to notice it without the special glasses on, looking closely at the display does reveal a tight comb pattern sweeping horizontally across the screen. We noticed the same issue on LG’s D2342P, another passive 3D display; it comes with the territory. While the stripes take a keen eye to spot, they can be distracting once you notice, especially on big blocks of solid color, like white. If you really have little intention of using 3D, this minute problem may be enough to deter you from the 2311gt and steer you toward a 2D-only model.

HP rates the 2311gt’s brightness at 250 cd/m², which is on the average to low side. Even significantly cheaper monitors can sometimes hit 300 cd/m². This isn’t much of an impediment in a typical office environment, but you might want to consider a brighter display near large windows or other areas with lots of ambient light. Also keep in mind that 3D will diminish this even further because the glasses block some light — you’re only getting the equivalent of 100 cd/m² after you don stereoscopic shades.

Like the aforementioned LG D2342P, the HP 2311gt comes with TriDef 3D Ignition, which serves as a launcher to adapt popular applications and games for display in full stereoscopic 3D. The repository of games goes 600 deep at present, and TriDef is fairly quick to add new ones, so you can rest assured most popular titles are supported, or will be soon. Just fire up the launcher, select your title, pop on one of the two pairs of 3D glasses, and you’re in another world.

With passive 3D, the number of vertical lines of resolution is essentially halved, so some games will tend to look “fuzzier” in 3D than 2D, but that’s just a fact of life. Also keep in mind that not all games will be easier to play in 3D. It’s tough, for instance, to look at both the iron sight on a gun and the target you’re shooting without closing one eye — just like in real life.

In terms of effect, we were extremely satisfied with the 3D feel the 2311gt delivered. Objects look “solid” on the screen, there is a real sense of depth, and you get a fair amount of leeway to move your head around before the illusion starts to break apart. Unlike active 3D monitors, there’s no “crosstalk” and glasses are lightweight and inexpensive. As we mentioned before, they do still dim the screen, so things can get pretty dark in atmospheric games.

As a 2D display, the HP 2311gt just looks kind of dull. Not irredeemably so, but the fact remains that you can get a better looking monitor for less if you’re not totally sold on the whole 3D thing. Its passive 3D mode goes a long way in improving impressions, but you should be prepared to make extensive use of 3D to make its $270 price tag feel worthwhile. And learn to use those monitor adjustments, because you’re going to need to spend some time with the color calibration for the 2311gt to look right.