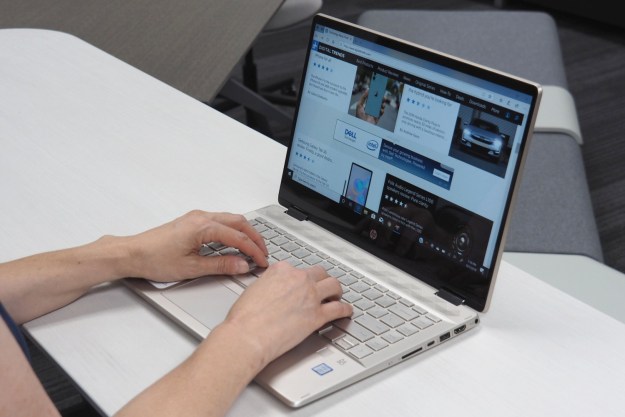 “The HP Pavilion x360 14's performance and build quality are top-notch for the price.”

Not everyone has thousands of dollars to spend on one of the best laptops, but the new HP Pavilion x360 14 is a prime example of a budget laptop that aspires for more.

The version I received sports an 8th-gen quad-core processor, though a model with 10th-gen processors is also now available. You can get the affordable model I reviewed at Best Buy for $560 with 8GB of RAM and a 128GB SATA solid-state drive (SSD).

That’s an attractive price, but can a laptop this cheap possibly offer everything you need?

A design that feels like it should cost more

The Pavilion x360 comes in silver, but aluminum it is not. You’ll need to jump to one of the laptop’s expensive cousins, such as the expensive Spectre x360 13 if you want to avoid plastic.

The lid gives a little under pressure, as does the keyboard deck. It’s nothing egregious, though, especially given that you’ll be spending less than half the money. That doesn’t mean the Pavilion is flimsy or cheap-feeling, though. It’s robust enough that you’ll be confident slinging it around.

The hinge, always important on a 360-degree convertible that can morph between clamshell, tent, media, and tablet modes, is stiff enough to keep the display steady but smooth enough when revolving.

The Pavilion x360 is an attractive laptop as well, coming in a huge variety of colors including Natural Silver, Mineral Silver, Warm Gold, Cloud Blue, and Pale Gold. Whew, that’s a lot. There’s either a $10 or $15 upcharge for all but Natural Silver, but whichever color you select is attractive with just enough chrome and the right angles to be familiar to HP fans. It’s not a gem-cut Spectre, or even the modern Dell Inspiron 13 7000 2-in-1 Black Edition, but half the price, you might not care.

Still, I wouldn’t quite call the Pavilion sleek. The side bezels are reasonably thin, and the top bezel isn’t huge — but man, that chin beneath the display is massive. Meanwhile, the Pavilion x360 is a bit chunky at 0.8 inches thick and 3.49 pounds.

Budget laptops are often well-appointed with ports, and the Pavilion x360 is no exception.

That’s pretty heavy for a 14-inch laptop constructed of plastic. The all-metal Dell Inspiron 2-in-1 mentioned above comes in at 0.63 inches and 3.08 pounds. The Pavilion x360’s weight is most concerning when you’re using it as a tablet, of course. All that is common with laptops at this price range, so I wasn’t too surprised.

Interestingly, I’ve noticed that budget laptops are often well-appointed with ports. The Pavilion x360 is no exception, coming with a nice selection, including a USB-A 3.1 Gen 1 port and audio jack on the left-hand side. The right-hand side is packed with another USB-A port, a full-size HDMI port, a USB-C 3.1 Gen 1 port, and a full-size SD card reader. There’s no Thunderbolt 3 support, but that’s to be expected at this price point.

I’m a writer. No matter how great a laptop looks or how well it’s built, the keyboard has to be useable. Fortunately, the Pavilion x360 inherited a very similar keyboard to its Spectre cousins. It’s a familiar island style, with keycaps that match the system color and lettering that’s light but still legible. The mechanism is a bit shallower and not quite as crisp as the Spectre keyboard — my personal favorite — but it’s better than most other budget laptops I’ve used. That’s a real plus in this machine’s favor.

The touchpad is plenty wide but a little short; there’s plenty of room on the keyboard for a larger touchpad. Fortunately, HP has moved to Microsoft Precision touchpad drivers in its latest laptops, including the 2019 Envy 13 that I liked quite a bit. Unlike HP’s older laptops using Synaptics drivers, the Pavilion x360’s touchpad is very precise and reliable.

The Pavilion x360’s touch display is responsive, another area where you’d be hard-pressed to tell the difference from a more expensive premium laptop. My review unit didn’t include an HP Active Pen, but if you configure a 10th-gen version at HP.com, then the pen is in the box. Accordingly, I didn’t get a chance to test it.

Finally, Windows 10 Hello password-less login is provided by a fingerprint reader located conveniently on the keyboard deck, to the right of the touchpad and out of the way. It works well, and it’s a bonus that you don’t find on many budget laptops.

Performance is par for the course

As I indicated in the introduction, my review unit used an Intel 8th-gen Whiskey Lake Core i5-8265U. According to our benchmarks, the Pavilion 360 performed as expected. For example, in the Geekbench 4 synthetic benchmark, the HP achieved roughly equivalent scores to the vastly more expensive Lenovo ThinkPad X1 Yoga Gen 4 with the same CPU.

In our more real-world Handbrake test that encodes a 420MB video to H.265, the Pavilion x360 finished in just over five minutes, 16 seconds faster than the Lenovo.

In other words, this 2-in-1 is plenty fast for the typical productivity worker. You won’t want to use the Pavilion x360 for video editing or high-end photo editing, but for Office apps, web browsing, content consumption, and the like, you’ll be fine.

Note that the Pavilion x360 is now available at HP.com with Intel’s latest 10th-gen CPUs. For example, a model with a Core i5-10210U and Full HD (1,920 x 1,080) display is on sale for $630, including an active pen that’s not in the box from Best Buy.Of course, you’ll also be ordering your Pavilion x360 with an Intel 10th-gen Ice Lake Core i5, and that’s likely to be faster. Note that you can upgrade to a faster PCIe SSD from the 128GB SATA SSD included in my review unit. It’s not a speedy drive, but it’s fast enough for productivity work.

One thing you won’t want to do with the Pavilion x360 is to play modern games. The Intel UHD 620 graphics won’t keep up.

Battery life is a letdown

So far, so good, at least at these prices. But what about battery life? If you want a laptop that will keep you working away from a plug, does the Pavilion x360 qualify?

I ran our usual suite of battery tests, and unfortunately, this is a 2-in-1 that doesn’t impress with its longevity. When browsing the web, the Pavilion 360 lasted for six and a half hours compared to the budget-oriented Acer Aspire 5 at nine hours with it 15.6-inch display. And when looping our test Avengers trailer, the HP lasted for under eleven hours compared to the Acer at 13 hours.

In our most demanding Basemark web benchmark test, the Pavilion x360 barely made it past two hours while the Aspire 5 lasted for an hour and forty minutes longer.

Clearly, battery life isn’t the Pavilion x360’s strength, at least when configured with the 8th-gen Core i5. That could improve with 10th-gen chips, but in any event, you won’t get a full day’s work out of the 2-in-1.

A budget price, a budget display

One component that often takes a hit in budget systems is the display, and the Pavilion x360 is a case in point. Five years ago, a Full HD display like this one would have been average. Today, it’s mediocre.

Specifically, the colors are muted. At just 62 percent of sRGB and 48 percent of AdobeRGB, you’re missing a chunk of your colors, and the accuracy is off as well. Contrast is also below average, at a 670:1 contrast ratio, and brightness is 262 nits, below our 300 nit threshold.

Don’t misunderstand me — this isn’t a bad display by any means, but you can get a better display, even on other budget laptops. The Aspire 5 is a great example — it has similar colors, but its higher contrast makes so productivity tasks involving black text on a white background more pleasant.

That’s the story here: The Pavilion x360’s display is just okay for productivity work, and its gamma at 2.4 is close enough to the perfect 2.2 that consuming media is a decent experience. I’ll note that audio is a strength, with plenty of volume and no distortion when cranked up. The Pavilion x360 isn’t punching above its weight in this category, but it’s not embarrassing itself either. If you’re looking for more of the best cheap HP laptop deals or other cheap laptop deals, check out the ones available now.

The HP Pavilion x360 14 is a fine budget 2-in-1, especially when purchased from HP.com with a 1oth-gen CPU. It’s built well, it looks good, and it offers excellent input options and solid connectivity. Battery life is disappointing, and so if you don’t want to carry a charger around with you, then this isn’t your best choice. But for anyone else, you really can’t find much better for the money.

You could collect all your loose change and skip your morning latte for a while, go for the more expensive Dell Inspiron 13 7000 2-in-1 Black Edition. You’ll enjoy an all-metal build and a bit more of a luxury feel, though at that price, you open yourself up to a world of great options, including the Spectre x360 or XPS 13 2-in-1.

If you want to stay in budget, you could opt for a larger display and grab an Acer Aspire 5 and enjoy much better battery life.

The Pavilion x360 is an all-plastic laptop, but that doesn’t mean it feels cheap. You’ll get your money out of this laptop, although as usual, the industry-standard 1-year warranty leaves us wanting more.

Yes. It’s far from perfect, but the HP Pavilion x360 14 is an affordable and attractive option for people looking at this price point.

Find out what HP units are on sale today by heading over to our best HP laptop deals list. You may also want to check out the best laptop sales for more options from other brands.