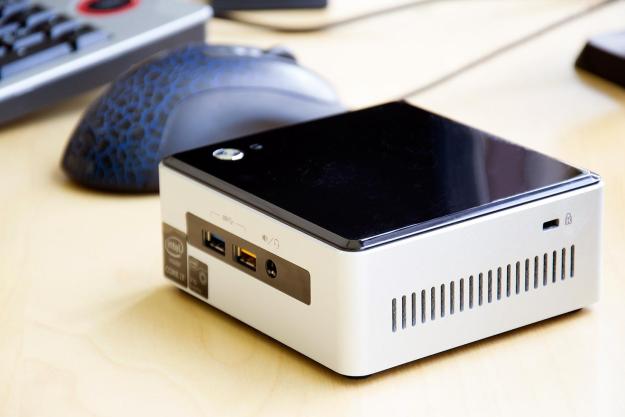 “The Intel NUC Core i7 may not be for everyone, but users who need a compact device with a speedy processor should be satisfied.”

When you hear the word desktop, you probably think of the large rectangular box that sits in your cubicle at work, or maybe an elegant all-in-one that kills cords and takes up only as much space as the monitor. But it’s 2015, and that means you need to start being more open-minded about the way you think about the desktop PC. Intel’s NUC would certainly appreciate it.

The newest addition to the Intel NUC family packs a dual-core, 3.1 GHz Intel Core i7-5557U into a small case, about the size of a router. Like the other models, it leaves you the task of installing your own RAM and hard drive. That means more customization, as well as a great opportunity to learn a bit more about how to put together a computer without having to do it all yourself.

While some people might take comfort in the classic tower shape, those of who feel a little more adventurous will find that the performance of the NUC, and its low price point, make it an appealing alternative to the typical mid-range desktop.

For such a small, barebones system, the NUC feels a little heavy, but that heft lends it a seriousness that you might not find in other small systems. Like its shorter Core i3 and i5 powered siblings, the Core i7 NUC has sturdy aluminum walls, but is capped with a piece of glossy black plastic that is easy to scratch and attracts a lot of fingerprints. Inside there’s plenty of room to install the RAM and hard drive, with a slot for an M.2 drive right on the board, and a 2.5” drive in the base, plus two slots for RAM.

The Core i7 NUC feels a little heavy, but that heft lends it a sturdiness you might not find in other small systems.

The i7 NUC comes in about two inches tall, almost two-thirds of an inch taller than the standard i5 version. That doesn’t really affect the footprint of the device, though. Wherever you needed to fit the smaller case, this one will probably fit too. The extra space means taller fan grills, and a little more room below the motherboard in the case.

The plastic lid pops off, but underneath there isn’t anything interesting going on; just a panel and the ends of the antennas. You can download the mechanical drawings from Intel’s website and 3D print your own lid, which in theory would allow you to add extra connections, like USB ports or an LTE. That being said, the NUC already has four USB ports, with one on the front with a higher power rating for charging devices, so don’t expect to see a lot of replacement lids that aren’t custom-made for special uses.

Other than its slightly taller size, the design of the Intel Core i7 is the same as the Core i5 version, which we previously reviewed.

The i7 performs as expected

Our test system came with the Intel Core i7-5557U. It’s a speedy dual-core chip with a 3.1GHz base clock, and 3.4GHz Turbo clock, soldered onto the motherboard. Because the NUC is a kit, we had to install the RAM and hard drive. For the memory, we used a pair of 8GB DDR3 from Crucial. The hard drive we installed was a Samsung 951 series M.2 drive with 256GB of storage. Because the components aren’t included with the system, your build may differ from ours.

The Core i7 NUC performed admirably in the GeekBench performance test. That’s not too surprising considering its hardware, but still impressive for a system of such small stature. The Alienware Alpha, Syber Vapor I and iBuyPower SBX all fell before the NUC, which is surprising given all three were designed as small form-factor game machines.

While the Core i5 we previously tested had Intel HD 6000 graphics on board, the Core i7 NUC packed Intel HD 6100 Iris Graphics. While our benchmarks showed a slight performance increase over the Core i5 NUC, in real world situations it didn’t count for much.

Any system with a respectable discrete GPU will clobber the NUC Core i7, as you can see from the 3DMark results. The Alienware Alpha we tested had a GTX 860M, a mobile GPU with 2GB of dedicated VRAM, and the difference in performance is striking. Still, like the Core i5 version, this NUC can handle 4K video at 60Hz.

Intel Integrated graphics are fine for streaming Netflix or playing some Candy Crush, but they aren’t known for their prowess in full-on gaming situations. Even Intel’s HD 6100 Intel struggled even with games like Diablo 3, which is a few years old. If your sight is set gaming, you’ll want to look elsewhere.

The classic top-down RPG was manageable at low detail and 1080p resolution, as the game averaged 32 frames per second, and it never dropped under 25 FPS, even with corpses exploding and fire raining down from the sky. Turning detail up to high, though, made the game unplayable.

Framerates never dropped under 25 FPS in Diablo 3, even with fire raining from the sky and monsters exploding en-masse.

The Intel NUC Core i7 struggled a bit with the newest Sid Meier game. You’ll have to turn the quality way down to achieve playable frame rates. We hit an average of about 18 FPS while running at medium settings in 1080p, and the game never broke 25 FPS. That’s not unplayable because of the game’s turn-based nature, but such a low frame rate would become frustrating.

The newest game in the Battlefield series is pretty demanding, and it’s a game that we frequently use as a benchmark for modern first person shooters. While the Iris graphics are noticeably better at gaming than the standard 6000, they’re still not going to win any awards against a discrete video card.

Battlefield 4 in 1080p is playable on medium settings, with an average of 26 FPS. With the graphical settings on ultra, the average FPS drops to 8, and maxes out at 10, which makes it near impossible to aim or take cover. Dropping the graphical settings to low, or lowering your resolution a bit would make the game a fairly enjoyable experience.

One of the nice features of a compact computer is low power draw, and the Intel NUC Core i7 is no exception. At idle, the system averaged just under eight watts, only slightly higher than the NUC Core i5, and still very power efficient for a desktop. Even under load, the system never went above 45 watts, around half of what we usually see from mid-range laptops.

Of course, these small machines can also be prone to producing a lot of noise, but the NUC Core i7 manages to keep quiet, even under pressure. At idle, the system is a barely audible 35dB, and even when the fan kicks into full speed for gaming or benchmarking, it only picked up to about 40 dB. That means in a totally quiet room, you can hear the fan whirring away, but any music or television at a reasonable volume will easily drown out the system’s noise.

If you need a system that fits in your TV cabinet or can attach to the back of a monitor, but still has some oomph, the Intel NUC series offers a number of great options. That being said, the version of the NUC with a Core i7 is going to run you about $100 more than the Core i5 version, with an estimated price somewhere between $475 and $525 (Intel does not set an official MSRP, leaving that up to retailers), and that’s before you add in the cost of an SSD and RAM.

You need an SSD anyway, might as well take advantage of the 2.5-inch bay with this 250GB drive you can often get for under $100.

The Core i7 NUC supports 4K video output, and this 27-inch offering from Dell comes in at a nice price point for a high-end display.

This compact Bluetooth mouse doesn’t have fancy features, but it is affordable, comfortable, and compact.

You might as well make the whole setup wireless with an full-sized 2.4 GHz keyboard that features media and activity keys.

At the lower end, you can purchase a 2.5-inch, 128 GB SSD for only about $70, and 4 GB of compatible RAM will run you just shy of $50. You’ll also need an operating system, which means buying Windows 8.1 for around $100. Even on the conservative side, you should expect to invest almost $700 to get the Core i7 NUC up and running.

Compare it to some of the other systems in the same size and price point, and you’ll really start to notice the difference. The Alienware Alpha starts at $499, but at that price point the system works right out of the box, and while it lacks 4K output, it has impressive gaming performance at 1080p. The Syber Vapor 1 is also a bit larger than the NUC, but it blew away the Intel graphics in our 3DMark tests, and its Core i3-4150 CPU was only slightly behind the NUC’s Core i7 in GeekBench.

Then there’s the Core i5 NUC, which will run around $600 with similar equipment. Or, if your budget is around $700, you can upgrade to eight gigabytes of RAM and a 256GB drive.

The i7’s performance jump is obvious in benchmarks, but it’s tricky to say who the faster, more expensive version is intended for. Neither NUC is really fit for gaming aside from the occasional round of solitaire, and most users won’t require, or even really notice, the extra punch the Core i7 provides.

The Core i7 NUC is a great little computer that moves faster than almost anything else in its weight class, but unless you’re using it for something specific, it’s worth looking into the Core i5 version first to see if it can handle what you’re going to throw at it. After all, you could spend that extra hundred bucks on a faster hard drive or more RAM.