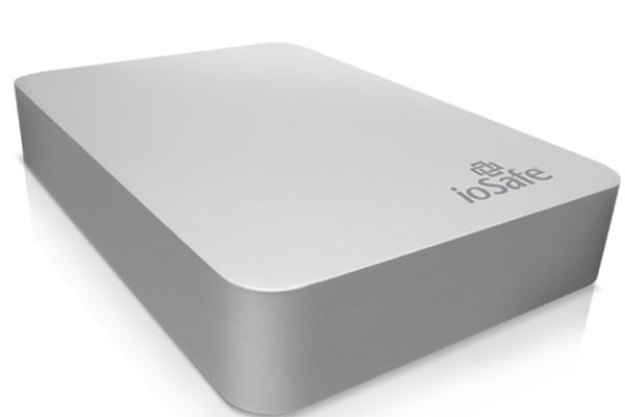 “Consumers who really don’t think they’re going to need a durable drive, or are willing to take the chance, will of course purchase a less expensive option. Those who absolutely can’t lose their data, however, should purchase the ioSafe Rugged Portable.”

Most external hard drives lead boring lives. They’re stationed on a desk, tasked with backing up some data, and do it for years until eventually they die of old age.

Not all drives are so sheltered, however. Part of the advantage of an external drive is the ability to take it wherever you go, but not all drives are up to a rough-and-tumble mobile life-style. What if you drop it? What if it gets wet? What if someone attacks it with a hammer?

One potential solution is ioSafe’s Rugged Portable. This metal-clad hard drive is built to withstand the most terrible conditions you could imagine, including full salt-water submersion, blowing sand, and up to 2,500 pounds of crushing force (with the aluminum enclosure).

This all sounds great – but is the drive actually quick, pleasing to use, and as tough as claimed? There’s only one way to find out.

Of all the reactions we received to the Rugged Portable, the most common was “that’s a hard drive?” Clad entirely in aluminum, and with I/O ports found only at the back, this drive hides its identity well. It could just as easily be some sort of small media center, or a tiny safe.

Confusion aside, the drive is an elegant piece of kit. The aluminum casing is seamless from every angle except the bottom, where four tiny rubber feet are placed to keep the drive from sliding off whatever surface it’s placed on. To my eye, the finish of the aluminum is not much different from that of a MacBook Pro – which is a big compliment.

Although the drive uses a 2.5-inch hard disk, the rough-and-tumble aluminum enclosure brings total weight to one pound. The drive is also nearly four inches wide, nearly six inches long and an inch thick. Upgrading to the even more durable titanium enclosure increases weight to 1.5 pounds, but does not change the exterior dimensions.

Like most current external drives, USB 3.0 is the connection of choice. The drive uses a micro USB 3.0 connection on the drive’s end, which isn’t proprietary but remains fairly uncommon at this point, so you’ll need to keep track of the one that comes with the drive.

Speed is not a trait that ioSafe brags strongly about in its press materials, although the usual vague claims do exist. Is the drive quick? Is it unbearably slow? We weren’t sure what to expect.

As it turns out, the drive is the former. When connected via USB 2.0, Read speeds reached 33.1 MB/s while write speeds maxed out at 29.2 MB/s. These speeds were sustained, and minimum speeds were only a few MB/s lower than the maximums. In comparison to other external drives we’ve tested, these results are above average.

What happens when you connect the drive via USB 3.0? Good things. Maximum read speeds shot up to 80.1 MB/s, and maximum write speeds accelerated to an eerily consistent 80.2 MB/s. Unlike the USB 2.0, however, there was significant performance variance over time. As a result, minimum read/write speeds were 33.6 MB/s and 36.8 MB/s, respectively. These results are substantially better than those of the Iomega eGodrive we reviewed in September.

Overall, there’s nothing to complain about here. The drive performs well under any conditions, and when connected by USB 3.0, it’s substantially quicker than any other mechanical external drive we’ve tested.

Quick as this drive is, that’s not the main selling point. The purpose of this drive is to keep your data safe, no matter what. We abused the drive to find out if it is up to the task.

For starters, we dropped the drive multiple times on concrete. First we dropped it from about three feet above the ground, then moved on to six feet, which is the highest we can imagine a person dropping it in normal use (just keep it off your balcony, ok?). One drop, which saw the drive hit corner-first from six feet, put a gash in the aluminum, but even that damage was superficial.

Having accomplished that, we decided to put the hammer down. On top of the drive.Repeatedly. This didn’t seem to do anything at all – in fact, the hammer seemed to be chipping itself on the drive. Perhaps this is a hint that we need to buy a better hammer.

Finally, we threw the drive down a muddy hill, then cleaned it by submersing it in a sink for five minutes.

We weren’t surprised to find that the drive worked flawlessly after this abuse, as it visually seemed only slightly worse because of it. In addition, our tests are extremely mild compared to what the drive can supposedly handle, as ioSafe claims the drive can sustain drops of up to 10 feet, up to one hour of chemical submersion at a depth of 12 inches, and other such extreme conditions. In the hands of the average consumer, this drive is near-as-makes-no-difference indestructible. No fall or spill is going to harm it. Even dropping it in your pool is okay.

If you’re hard on your hardware, the Rugged Portable is clearly the answer to your mobile storage needs. Our durability testing found no flaws, and even if you did manage to destroy the drive, you’re covered by ioSafe’s data recovery service. One year of this protection is included with the drive, and extended coverage periods of three or five years can be purchased.

In addition, ioSafe throws in Genie Timeline Professional with the purchase of the drive, providing owners with a backup solution of their own. This software is priced at $60, so it adds a little extra value to the drive.

Enamored as we are with the drive’s performance and durability, there are two problems: size, and price.With a weight of one pound, the drive isn’t exceptionally portable, and consumers may find it hard to pay $200 for a 500GB external drive when standard, non-rugged options cost as little as $60.

These points are clear knocks against the drive, but they’re also part of the territory. A durable version of anything is going to cost more than the standard product (the Panasonic ToughBook laptops, for example, start at almost $3,000). Consumers who really don’t think they’re going to need a durable drive, or are willing to take the chance, will of course purchase a less expensive option. Those who absolutely can’t lose their data, however, should purchase the ioSafe Rugged Portable.