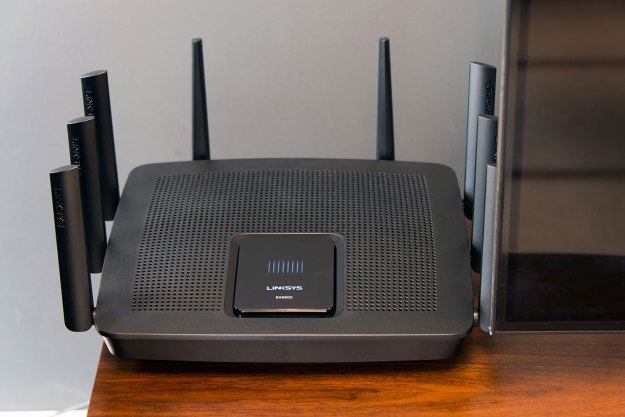 “Powerful, fast, and covering a wide range, the EA9500 is the best consumer router on the market right now.”

Sometimes, good enough isn’t. If that’s how you feel about your wireless connection, you need to stop using whatever your ISP gave you and look into some of the great routers on the market right now.

Recently we recommended the Linksys EA7500, a straight-forward but powerful router priced at $200. The Linksys EA9500 is a similar device in many ways, but it turns the performance up to eleven. With 5.3 gigabits per second of bandwidth, three separate bands, and eight gigabit LAN ports, there are few consumer routers on the market right now that match the EA9500. 802.11 ac/n/g/a/b compatibility means any wireless device you own can connect without problems.

Of course, all that power has a price: $400. That’s a lot for a piece of technology most people never think about. But if you’re tired of terrible connectivity in your house, or normal routers simply can’t cover the area you’d like, this is the solution.

Is the Linksys EA9500 worth paying for? And what kind of range can those antennas offer?

No one would accuse the Linksys EA9500 of subtlety. Sure, the base unit that makes up the bulk of this 2.2-pound device is modest: It’s basically a black plastic box with an LED Linksys logo on top. But the eight giant antennas are impossible to tuck away neatly, and the result looks vaguely monstrous. Multiple Twitter users who saw an early photo we posted joked that the EA9500 looked like the face hugger from Alien, or a giant mechanical spider.

Even without those antennas, this is not a small router. It’s going to take up a 13 × 11-inch surface somewhere in your house, identical to the footprint of a 13-inch laptop like the MacBook Pro. The base unit is a couple inches tall, and the top of the eight antennas are six inches above your shelf or desk, so you’re going to need a decent amount of empty space above it. For best reception, routers should be placed out in the open. The Linksys EA9500 draws attention to itself, however, so we wouldn’t blame you if you hide this monstrosity in a closet instead.

Put simply, this router was designed to perform, not fit into small spaces. If you’d prefer something that won’t look out of place with your decor, get a Google OnHub router instead. Then again, with the kind of range this Linksys offers, you can probably find an out-of-the-way location for it.

A staggering amount of connectivity

Antennas are the main design feature of the EA9500, and that’s for a reason. This router wants to offer a lot of bandwidth, across a wide area, without a lot of congestion.

This router offers a ton of bandwidth, across a wide area, without a lot of congestion.

How to use these bands is ultimately up to the user, but each has its own advantages. The 5GHz bands offer way more bandwidth but less range, making them ideal for media streaming and gaming near the router itself. The 2.4GHz band offers better range but less bandwidth, making it ideal for browsing the web on a laptop or phone that’s sometimes further away from the router. As with most multi-band routers, users can switch between the 2.4GHz and 5GHz bands by choosing the appropriate SSID.

The two 5GHz bands took up opposite ends of the channel spectrum in our tests. By default, these two bands share an SSID, and the router automatically connects devices to one or the other while automatically optimizing usage.

If you’d prefer to configure band usage yourself, you can disable the “Smart Connect” feature and choose separate SSIDs for the two 5GHz bands. That way you can reserve a band entirely for your gaming PC or media streamer and not worry about other devices clogging it up.

MU-MIMO is supported, meaning bandwidth is directed at specific devices instead of splitting between them. The result is theoretically improved performance with three or more people streaming videos or otherwise using a lot of bandwidth, because users aren’t slowing each other down.

It’s hard to notice with all the antennas drawing your attention, but there’s also plenty of wired connectivity here. Eight gigabit LAN ports give you plenty of room to plug in anything with an Ethernet port, and that’s in addition the the WAN port. With four as the standard number of ports on consumer wireless routers, we’re sure some users will be thrilled to see all those ports.

There are also two USB ports: one 2.0, one 3.0. Use these to connect a printer or any USB hard drive. Files on the drive are shared to the network via SMB and FTP.

We’ve reviewed some powerful routers recently, but the Linksys 9500 stands out. We intentionally placed it in an inefficient location — a cupboard on the third floor in the far corner of a townhouse. Reception was strong everywhere, even two floors down on the other side of the house. The signal of neighboring routers, which frequently causes problems in the area, could not keep up with what the 9500 put out. Even in the backyard, the 9500’s signal was strong.

If you want the best consumer router money can buy, the Linksys EA9500 is it.

If you don’t get the same results, all eight antennas are configurable. Arranging some to better point at any dead spots could help with coverage. If even that doesn’t help, your situations still isn’t hopeless. Linksys offers a compatible wireless extender: the Linksys AC1900+ (which is another $150). Setting this up takes just a few minutes, and with it set up between the router and a dead spot you will see an improvement.

We set this up on the opposite side of the house, and then took a walk outside with tablet in hand.  We managed to upload a photo from a park bench in a forest half a kilometer away. The connection wasn’t fast, but it was working.

If this router can’t cover your entire home, nothing can.

Easy to set up and configure

The EA9500 is configured using Linksys Smart Wifi, the web-based interface supported by all recent Linksys routers. As we discussed when we reviewed the Linksys EA7500, this offers a great compromise for power users and novices alike. All the things people want to quickly configure, like the guest Wi-Fi and parental controls, are easy to find.

But the advanced features aren’t obscured, if you know where to look. Even better, you don’t need to memorize any IP address. Just head to LinksysSmartWifi.com to configure your router.

Google’s OnHub router sets the standard for ease-of-use, and the EA9500 can’t hold a candle to that. It doesn’t have the same focus on a no nonsense user interface or app compatibility. But this is not a hard router to set up or configure.

Linksys offers a three-year warranty, and three years of tech support. One year is standard for routers, so this is generous, but considering the price point, three years is what you should expect. It’s good to see Linksys stand behind a product they’re asking users to shell out quite a bit for.

Probably way more power than you need (yet)

There aren’t many 5.3Gbps routers on the market right now, and the Linksys EA9500 offers more power than all of them. It matches or exceeds the similarly priced Netgear Nighthawk X8 and the ASUS RT-AC5300 spec for spec, and does so while being easy to set up and use.

The only real downside here is the $400 price tag – and the fact that, for most people, this router is overkill. Unless you have an unimaginably fast home Internet connection, and top-of-the-line everything, odds are you’re not capable of using up 5.3Gbps of bandwidth. Something else, be it your Internet connection or your devices, will be the bottleneck.

It’s worth considering already powerful cheaper alternatives, unless you absolutely need all that power. You can get a 2.53Gbps Netgear Nighthawk X4 for $250, or a 2.2Gbps Zyxel AC2200 for $130. Both routers offer half the bandwidth of the EA9500, and half the wired ports, but realistically still offer more power than most people can use.

Those are good routers. Good enough for most people. But if you need, or want, a router that raises the bar on performance, the Linksys EA9500 is it.