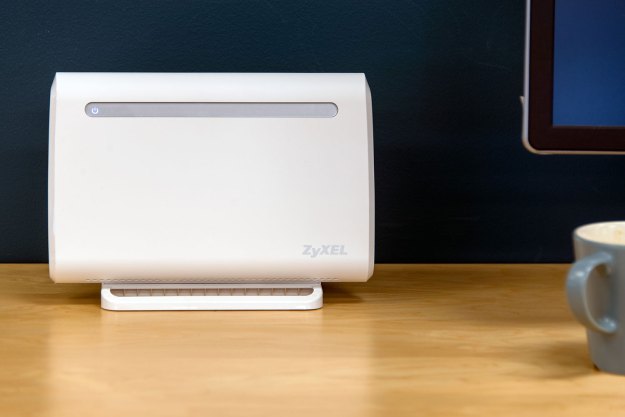 “If you want a high-performance router at a mainstream price, Zyxel's NBG6815 is it.”

Want a high-performance router, but don’t want to spend $250? You’re not alone, and Zyxel’s NBG6815 just might be what you’re looking for.

“Zyxel” might sound like a new treatment for hair loss (“ask your doctor is Zyxel is right for you”), but this Taiwanese networking equipment outfit has been in the business for decades. Best known for its work with corporations and other large organizations, Zyxel also makes a range of routers intended for the consumer market.

The Zyxel NBG6815 is its answer to high-end consumer routers. With total bandwidth of 2,200 megabits per second spread across two frequencies, 2.4GHz and 5GHz, this router is almost certainly faster than your home Internet connection. And at $150, it’s priced competitively — there are plenty of $200 and $250 routers with similar specifications.

Is Zyxel’s solid on-paper performance and low price too good to be true? Or does Zyxel’s corporate focus make for consumer tech that’s too unwieldy for most users? We set one up to find out.

Unlike some of its competitors, Zyxel’s entry is a router, not a work of art. If you’re looking for something like the Google On Hub, designed with aesthetics in mind so you won’t mind placing it somewhere visible, the NBG6815 isn’t it. Instead, this router tries to cram power into a small profile. The look is at the bottom of its priority list.

Most routers take up a large surface area on a desk or shelf. Zyxel’s built-in feet make it stand upright, almost like a TV, which offsets its otherwise large size. Sitting on a table or shelf, this one-pound chunk of plastic only takes three by ten inches of surface area. The face of the router is 10 by eight inches, and the whole thing is tilted just enough so the cables plugged in the back can be totally obscured, even if the router is right up against a wall.

This large white surface, facing forward, stands out, and not in a good way. We wish it were more understated. But there are a few points in its favor. The front face has a number of LEDs, which is useful, but you can turn them off entirely by hitting a button on the back of a device. This is perfect if you can’t stand blinking lights, because you can leave the lights off when you don’t need to confirm the router’s status.

The Zyxel’s vertical design allows it to hide six internal antennas inside its case. These put out two different wireless signals; one is 2.4GHz and serves 802.11 b/g/n, the other is 5GHz and serves 802.11 a/n/ac. Combined, these two signals offer 2,200 megabits per second of bandwidth. That’s 450 Mbps from the 2.4GHz connection and a staggering 1,733Mbps from the 5GHz connection. On the back of the router are four gigabit LAN ports, and a gigabit WAN port.

This router crams power into a small profile, aesthetics be dammed.

As is typical for such routers, each signal is offered with a separate SSID. The 5GHz signal appends “.speed” to the name of the 2.4GHz. This means users can easily switch between the two different signals. The 5GHz connection offers more bandwidth but worse range, so the idea is to use the 5GHz for video streaming on devices close to the router, and the 2.4GHz connection for general web browsing. Users can experiment to see what works best for them.

MU-MIMO is included. This technology, first revealed to consumers in 2015, directs bandwidth to specific devices, instead of splitting it between them. The result is improved performance when three or more people are streaming video, or otherwise using a lot of bandwidth, because users aren’t slowing each other down.

If you’d like to add some storage to your network, there are also two USB 2.0 ports for external drives. Plug in your NTFS or FAT external hard drive and it will be shared over the network. This is nice, but the lack of USB 3.0 compatibility is a little bit disappointing from a router otherwise so focused on speed. Transfers to connected drives will be bottlenecked by this.

The Zyxel NBG6815 is almost certainly faster than your Internet connection, unless you have Gigabit fiber. We found the router provided the full speed offered by the ISP in our test environment — 32MBps, up and down. Streaming HD video wasn’t a problem, and neither was online gaming.

Range didn’t extend as far as the Netgear Nighthawk X4S, with its range of huge external antennas, but it was more than respectable. The house we tested the router in was covered, as was the back yard and a bit of the forest behind that. The sidewalk in front of the house, bathed in signals from the neighbors, was weak compared to other routers we’ve tested. Still, we’d guess that most mid-sized houses would be easily than blanketed with connectivity.

Setting up is easy, under the right circumstances

Setting up the NBG6815 is, given the proper conditions, simple. Just plug the cable from your modem into the yellow WAN port, then plug another computer into a LAN port, and finally plug it into the power supply. Head to your browser and you’ll be presented with a set of simple instructions to follow.

Of course, if your situation does not align perfectly with the instructions above, you’re probably going to be a little frustrated. For example, if you already have a router, and want to configure the NBG6815 to act only as a wireless access point, it can be tricky to connect in order to do that, because you’ll be fighting against the ease-of-use. Which is all to say that, like most routers, you’re likely going to need a bit of knowledge during setup.

Once everything is set up, there are two “modes.” Easy Mode, the default, gives you quick ways to change wireless, guest networking, and parental control, and not much else. But you’re just a click away from “expert mode,” which gives you access to the sort of advanced features experienced users are probably looking for. It’s a compromise that gives most users access to only the things they’re looking for without leaving the power users out in the cold.

Zyxel offers a two-year warranty for the NBG6815. One year is standard, so this is generous.

Great value for quite a bit of power

There are more powerful routers out there, and there are cheaper ones, but we think the Zyxel NBG6815 offers a great compromise.

Sure, it cannot compete with the $400 Netgear Nighthawk X8, with its 5.3Gbps of combined bandwidth and massive external antennas. Few routers can. But for $150, the Zyxel NBG6815 offers quite a few premium features, from MU-MIMO to a DLNA server. Compare its feature-set to the $200 Linksys EA7500 or the $270 Netgear Nighthawk X4S, and you’ll see they’re about equivalent in terms of speed and hardware. We also found them similar in terms of performance, and the software is relatively easy to configure.

Sure, the lack of external antennas is likely limiting range. And the lack of USB 3.0 is a disappointment, especially on a “media” router. But if you want a 2,200Mbps wireless router for $150, the Zyxel NBG6815 is one of the better deals going right now.

Snapchat now has restaurant reviews. Here’s how to view them