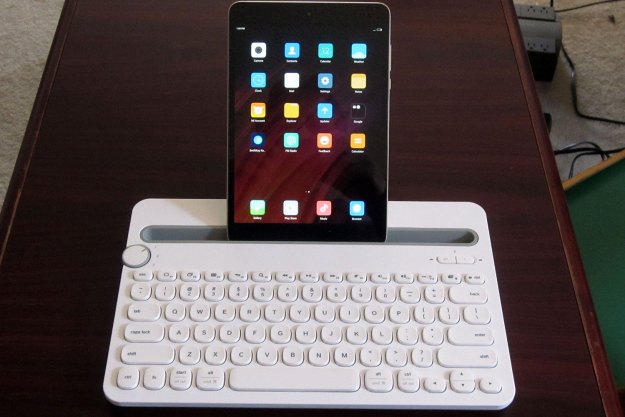 Many of the keyboards we’ve looked at lately have been multi-device models, in that you can pair two or more computing devices—smartphones, tablets, PCs, Macs—to them simultaneously, and then switch back and forth with the touch of a button. Aside from Microsoft’s Universal Foldable Keyboard ($70), though, none have been small enough to consider carrying around with you – except Logitech’s Bluetooth Multi-Device Keyboard K480.

The K480 is compact and light compared to many multi-device keyboards, including those in Logitech’s line-up. It’s also inexpensive. Logitech lists it for $50, but we found it at several online outlets for around $30. At that price, the only real issues left are — does it, as its more expensive siblings and competitors do, perform well, and is it really portable?

Not your everyday keyboard

Chances are, you haven’t seen anything quite like the K480 before, as the keyboard’s blocky design looks like the bottom half of a tablet. It measures about three quarters of an inch thick, by 11.8 inches across, by 7.7 inches from top to bottom, and weighs 1.8 pounds. Unlike most Logitech keyboards, it’s flagrantly plastic, to the extent that it feels cheaply made. It even creaks and complains with the slightest finger pressure on the deck and chassis.

Like the K780, the K480 has a groove that runs across the top (Logitech calls it a “smart device stand”) for holding your tablet or smartphone upright as you type. Since the K780 is significantly wider (15 inches vs. 11.8 inches) than the K480, it can hold larger devices, or two relatively large devices, at once, whereas the K480 is capable of holding most tablets, say, up to 10.1 inches in landscape orientation, or a smaller tablet (perhaps the iPad Mini or Google Nexus 9) and a smartphone in portrait orientation.

The underside is encased in an off-white plastic. Embedded in the plastic are small rubber pads that act as feet, and they provide a slight incline for comfortable typing, though there’s no way to adjust it. Also on the bottom is an on/off toggle and a compartment that holds two (included) AAA batteries, that Logitech says will last up to two years, or for 2 million keystrokes. Unfortunately, it’s not rechargeable, but if the keyboard truly gets two years’ life out of a set of batteries, that’s really a moot point.

As mentioned, the K480, like the K780, can pair with up to three Bluetooth devices at the same time. There’s a slight difference, though, in the procedure. Where the K780 utilizes three buttons, or keys, to initiate pairing and then switch from device to device, the K480 has a selection wheel with three options (1, 2, and 3) just above the ESC key. To pair with a device, then, you set the wheel to the desired position, and then press and hold the appropriate platform button located on the right side, opposite the selection wheel. (There’s two buttons; the one on the left is for everything Windows and Android, and the right one is for everything Apple, such as iPhones, iPads, and Macs.)

It switches between devices swiftly and seamlessly.

Then follow the pairing procedure for the computing device, which in most cases entails typing a code that displays on the screen. Once you have paired two or more devices, you switch between them by setting the selection wheel to the appropriate number. It all works quite well, swiftly and seamlessly, but we should point out that for some reason the K480 will not work with Windows Phone.

As with all of Logitech’s multi-device keyboards, the K480’s keys remap themselves according to the operating system of the device with which it’s paired. The Windows Start key, for instance, becomes the Option key when you’re paired with a Mac. The Windows function keys remap to Home, Back, Search, Multitask, and so on, when the keyboard is paired with an Android tablet or smartphone. And each key’s dual function is clearly labeled, making it easy to find the appropriate keys as you work.

Comfort and all that

Despite its size and weight, the K480’s isn’t really much bigger than that of the Surface Cover, or most other keyboards designed to work with a tablet. The keys are oval, with a slight concave, and most are big enough. The keys are a little tightly spaced, and some, such as Scroll Lock, Page Up/Down, and Print Screen, are missing altogether.

The Alt, Fn, Ctrl, Spacebar, and several other keys, including the row of function keys across the top, are slightly convex. Between the tight spacing of the keys, the varied shapes and sizes, and somewhat unorthodox layout, typing on the K480 is different enough from typing on a standard desktop keyboard that it took us a while to get used to. In fact, we found switching back and forth from a standard keyboard to the K480 a little disorienting.

If you use it long enough, though, you will get used to it. Typing this article on it, for instance, didn’t take a whole lot longer than it would have on a full-size desktop keyboard. As for plunge and travel, the keystrokes are soft enough to provide adequate comfort. However, each keystroke produces a loud plastic “click, click, click.” You wouldn’t want to try using the K480 in a library or some other ultra-quiet setting.

Logitech guarantees the K480 against failure under normal use for 1 year, which is about average for a product like this. The company says it was designed and tested to last for at least 2 million keystrokes.

While the Logitech Bluetooth Multi-Device Keyboard K480 feels a bit cheap, it’s a decent value given its low price. It’s not the most comfortable for prolonged typing, but then neither are most other keyboards designed to work with mobile devices.

If you’re looking for something classier and easier to type on, Logitech’s K780 multi-device keyboard, which costs more than twice as much, is a higher-end, more-comfortable-to-use alternative. If portability is important, there’s the Microsoft Universal Foldable Keyboard we mentioned earlier. But Microsoft model, lacks a stand for holding your mobile devices upright.

It’s hard to say. As mentioned, the keyboard creaks and moans when you pick it up, and it doesn’t feel like it would survive falling on to a hard floor. It should serve for a few years, but it’ll need proper care.

If you’re looking for an inexpensive way to jump back and forth between your computing devices on the same keyboard, sure, why not, especially if you plan to leave it on your desktop. If you’re looking for a multi-device solution to carry around with you, Microsoft’s Universal Foldable Keyboard is pretty slick. Given all that it does for 30 bucks, though, the K480 isn’t such a bad deal.